Chris Hemsworth: I don’t like doing too much of the same thing | Inquirer Entertainment

Chris Hemsworth: I don’t like doing too much of the same thing

HEMSWORTH “gets beaten up by three women” in the sequel.

SINGAPORE—Chris Hemsworth is famous for playing stoic but well-meaning he-men (“Rush,” “In the Heart of the Sea”) or the Mjolnir-wielding Asgardian god of thunder in the Marvel Cinematic Universe.

But Thor’s dashing alter ego was far from tight-lipped and distant when we met him during the press tour of Cedric Nicolas-Troyan’s “The Huntsman: Winter’s War” on April 4 in the affluent city-state.

The film, which began its theatrical run in the Philippines this week, follows star-crossed lovers, Eric and Sara (Jessica Chastain), who are forbidden to fall in love by Freya (Emily Blunt), the Ice Queen who raised and trained them as warriors after severing ties with her evil sister, Queen Ravenna (Charlize Theron).

“Winter’s War” is the sequel to 2012’s “Snow White and the Huntsman,” a film starring Kristen Stewart (as Snow White), Theron and Hemsworth that was more controversial for what went on behind the cameras than for its cinematic merits.

After the shoot, Kristen publicly apologized for her short-lived affair with her married “Snow White” director, Rupert Sanders—an “indiscretion” that led to the breakup with actor Robert Pattinson, and the end of the director’s marriage to actress-model Liberty Ross, who played Snow White’s mother, Queen Eleanor. Truth is stranger than fiction, indeed.

Chris, who was adjudged People’s Sexiest Man Alive in 2014, looked more than relieved that the film franchise’s sequel could hold up to scrutiny, even without the original flick’s tabloid-fodder scandal. (Kristen isn’t in the sequel.)

Noting how light and fun the shooting of “Winter’s War” was, Chris mused, “Sometimes, you get lucky when you get along with the people you meet on the set. I like having good fun with good people. It makes the work more enjoyable. It isn’t always like that.”

When Chris, Charlize and Jessica faced Asian journalists in a panel discussion at the Equarius Hotel, the 32-year-old Australian actor was relaxed, accessible and took his costars’ ribbing with a grain of salt.

“In the film, I get beaten up by three women… and I let them,” he disclosed with laughter. “I like the film not only because of how its characters are delineated, but also because of the way it portrays women.”

For her part, Charlize referred to Chris as the production’s sixth “female” cast member, after herself, Jessica, Emily and the actresses who play lady dwarves, Alexandra Roach and Sheridan Smith.

Excerpts from our Q&A with Chris:

We know you have the courage and steely resolve of a Norse god, but didn’t you find it intimidating to be working with three of Hollywood’s screen goddesses—Emily, Jessica and Charlize? 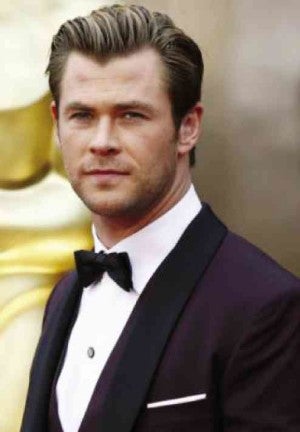 HEMSWORTH “gets beaten up by three women” in the sequel.

I was intimidated by all of them, especially on set when the cameras were rolling and they were already in character.

I’ve met them all prior to shooting—I was friends with Emily, but I haven’t worked with Jessica before this.

When they’re working, Charlize, Emily and Jessica are all very intense, especially with those thousand-yard stares (laughs).

It was incredible watching different styles and “stealing” ideas from them in terms of how they prepare for their characters. I saw the experience as a special opportunity to learn.

You’re famous for playing Thor and the Huntsman. Do you prefer portraying god or man?

They’re both fun to portray, for different reasons. After playing one, I want a break and enjoy playing the other. The challenge with Thor is how to ground him in reality.

Portraying the Huntsman this time around was more fun, because we were able to play with the character more because of the film’s sense of humor and its lighter tone. It isn’t as dark and depressing as the first one.

Whom would you rather have on your side—the Ice Queen or the Evil Queen?

I’d choose Ravenna just because it’d be fun to hang out with her for a day, especially if you’re not on the receiving end of her [evil deeds].

Just for fun: If you were another person, would you be a fan of Chris Hemsworth?

(Laughs) Yeah, I’m pretty happy with who I am. I’m proud of myself—so, I think Chris and I would be friends. There’s a part of me that enjoys all this [success].

What kind of roles are you partial to?

The kind of films I want to do as an actor is pretty much what I’d like to see as an audience. I want variety.

I don’t like doing too much of the same thing, because I like getting challenged. I like the element of surprise. I want to continue exploring different worlds and characters.

Jessica revealed that you aren’t afraid of spiders and snakes. What animal or bug are you afraid of?

Sharks. The place where I live [in Australia] is actually the

But I also admire them and think that they’re fascinating—they’re essential creatures for the survival of the planet’s ecosystem.

I still surf. I don’t eat them, so I also hope they won’t eat me. We have a deal (laughs).

Did you “steal” anything from the set?

I got the Ice Queen’s dress… and her shoes, too. I collect these things, you know. If there’s another film, I’ll just bring them back.