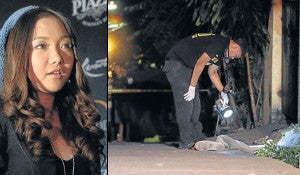 HOME FOR DAD Charice quit her concert in Singapore after learning of her father’s death. At right, a police investigator examines Ricky Pempengco’s body sprawled on a street in San Pedro, Laguna. GRIG C. MONTEGRANDE

International pop star Charice dropped everything when she learned of her father’s murder even though she had previously been “renouncing” him though she said nothing about his reported “scandalous behavior.”

Charice’s father was stabbed to death in a drunken street fight in San Pedro, Laguna province, police said Tuesday, as the 19-year-old singer canceled a concert tour in Singapore to be with her family.

Ricky Pempengco, 43, a construction worker, died instantly from two stab wounds in the chest after an altercation with another man on a street in Laram village, San Pedro, just before midnight on Monday.

“It appears to have been a drunken skirmish,” said Superintendent Kirby Kraft, the San Pedro police chief, who noted that both the victim and suspect were drunk at the time of the incident.

Pempengco had just come from a drinking spree and was buying cigarettes from a store near his residence when he encountered his assailant, said Kraft.

Police are still searching for the suspect, Angel Capili, 35, a former resident of the village who had moved out in 2005 but was visiting friends on Monday.

Ricky Pempengco was the estranged father of Charice, who was only 3 years old when he separated from her mother, Raquel. It has been widely reported in the entertainment media that the breakup was caused by the father’s violent and abusive behavior.

Charice mourned her father in a post on Twitter Tuesday. She said they had been close until her parents separated and the children stayed with their mother.

“We had a really great relationship before all the trouble started… I loved him and I will still love him. He’s still my dad after all,” she said.

Charice has canceled her concerts on November 2 and 3 at the Grand Theatre at the Marina Bay Sands in Singapore.

The singing sensation, whose widely viewed videos on YouTube brought her to the attention of US television hosts Ellen Degeneres and Oprah Winfrey, both of whom gave her crucial worldwide exposure, had been touring Southeast Asia with producer and mentor David Foster.

“I am very sorry to all my fans from Singapore. I am not going to be there to be part of (the) David Foster and Friends concert. I have to go back to the Philippines as soon as possible to be with my family. I hope you all understand. I love you all and I will see you next year,” said Charice in another Twitter post.

Ricky Pempengco’s remains were brought to the Divine Mercy Viewing Chapels in Tunasan, Muntinlupa City, where the family awaited Charice’s arrival. The singer arrived at 11:45 p.m. Tuesday night from Jakarta.

Wearing a black shirt and dark glasses, Raquel turned down interviews from the media Tuesday, until after her daughter arrives.

She sat in front of the white coffin with Charice’s manager, Grace Mendoza, and a 16-year-old son.

“She’s okay but you know how it feels (to lose a father). She’s still his daughter,” Mendoza said of Charice.

Mendoza said Charice had instructed them not to say anything until after she arrives to personally give a statement in behalf of the family.

“They’re okay, except earlier at the funeral parlor (when Raquel broke down),” said a relative, who requested anonymity.

Lashes out at relatives

In another Twitter post, Charice seemed agitated at some private messages from her father’s siblings. She lashed out at them, accusing them of being responsible for keeping her away from her father.

“To my father’s siblings, you have no right to say what I’m feeling. What right do you have to say that I’m happy over my father’s death? You are only his siblings while I’m his daughter,” she tweeted in Filipino.

“If you remember, you were the ones who told us to stay away from our father. You told us not to use his name. My mom did not stop us from visiting him but you would not let us visit. You have no respect for our family for you to say that now! Instead of helping, you made things worse!

“I know that I had been angry with him. But I never said that I was renouncing him. I have been silent for so long over his scandalous behavior. But now, I cannot bear the thought that with his death, your attitude is still the same. I am not afraid, least of all of people who have no respect,” Charice said.

But in her last tweet before informing her fans that she was canceling her Singapore gigs, Charice was reflective, digging deep into her memories of her father.

“Last night, I told someone that he looked like my dad. I did not know that my father was making his presence felt. I just want you to know that we had a really great relationship before all the trouble started. He told me when I was little—and my mom does not actually know this—that he wanted me to be a soldier because I’m brave,” she said.