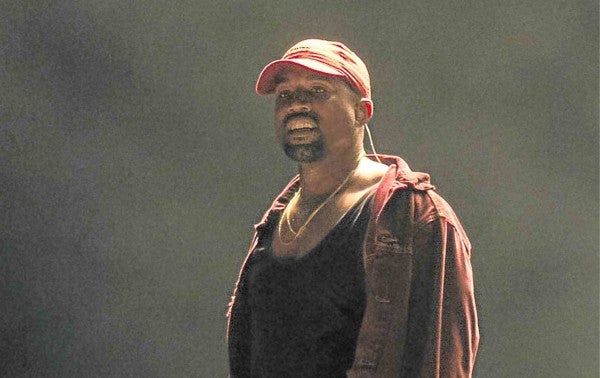 In his first-ever live performance of “Famous,” the controversial lead single off his latest album, “The Life of Pablo,” Kanye West, ever the perfectionist, stopped the song midway through. Was there a technical glitch? Or was there something that simply did not feel right?

The reason was not clearly discernible to the sea of faithful before him, but was apparently glaring enough for his meticulous ears to force him to start over.

Surely enough, it was bedlam the second time, the pumped-up audience at Aseana City Open Grounds volleying the verses back to Kanye with unwavering ferocity:

“I feel like me and Taylor might still have sex / Why? I made that b*tch famous,” the fans bellowed—emphasis on the last line, which referenced the now infamous incident at the 2009 MTV Video Music Awards, where Kanye—being Kanye—went up the stage and interrupted an acceptance speech by pop superstar Taylor Swift.

It was visible that Kanye, the headliner of the recent Paradise International Music Festival 2016, had a grand time doing the number, so much so that he asked the crowd if he could do it all over again—but not before launching into a sermon that was part reflection on the events that inspired “Famous,” and part monologue on his misunderstood genius.

“This is the song that broke the writer’s block for me. There was something I wanted to say so badly, but they told me I could not say. That night when I went onstage was the beginning of the end of my life … Lady Gaga canceled the tour (‘Fame Kills’) the next day,” he said. “You know the night I was talking about.”

For speaking out on things that other people have in mind, but would not dare say out loud, Kanye said he had to fight every day of his life, with the world against him. But that is the job of an artist—a true artist, he pointed out.

“Artists are not to be controlled by finances and perception, but only by their truth—what you see, what you feel, and say what you f**king feel! It is overwhelming for me to have performed that song for the first time and for you all to react to it that way,” Kanye said, as fans chanted, “Yeezy! Yeezy!”—the name of his clothing line that has become his moniker.

Kanye has always been a polarizing figure in pop culture—praised for his progressive style of hip-hop that shows off his unmistakable and profound musical artistry; reviled for his perceived megalomania.

But that night, one thing was undeniable: The man is a consummate showman.

He regaled the crowd with about 30 songs culled from his seven studio albums: “Power,” “Black Skinhead,” “All Day,” “Jesus Walks,” “Niggas in Paris,” “Runaway,” “FourFiveSeconds.”

Aside from “Famous,” he also did select tracks from “Pablo” live for the first time: “Father Stretch My Hands, Pts. I and II,” “Waves,” “Ultralight Prayer.”

All the while, he performed under a plane of orange spotlights that hovered over his head, its shape and lighting patterns shifting to adapt to the show’s changing moods.

At times, the array of lights beamed straight on Kanye, who basked in its glory; most of the time the lights forged a hazy wall that exposed nothing more than his silhouette.

The production, while not on the same scale as his previous, high-profile shows, was still very much a visual and aural spectacle; a collision of hypnotic, intricate stage lights and thrashing, rippling beats that shook the dust off the ground. 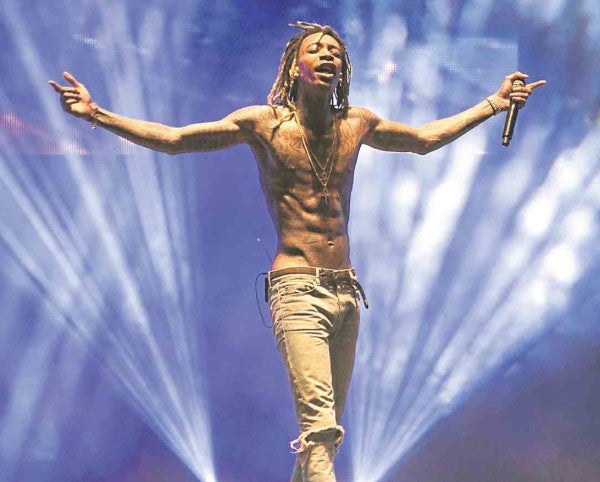 If Kanye’s set was a painstakingly curated display designed to awe, Wiz Khalifa’s was as laid-back as it could be.

The American rapper, who went before Kanye—with whom he had a Twitter feud earlier this year—was easy, breezy onstage, much like the carefree choruses that flourished his funky, danceable hip-hop sound.

He giggled, gyrated, waved his lanky arms, doused himself with water and moved—as if in slow motion—about the stage, as he spat some of his most well-loved hits that drove the fans into frenzy, including—“Young, Wild, Free,” “Black and Yellow,” “Roll Up,” “On My Level,” “Mezmorized,” “We Dem Boyz,” “Taylor Gang” and “See You Again.”

At one point, the rapper oh-so-casually lit up a joint, and took not a few puffs of it as the cool wind blew his half-opened Hawaiian shirt that exposed his intricately tattooed torso.

“We all got some problems … we all need to get high,” he jested, sniggering. And some did take his heed, the balmy air being suffused by that unmistakable sweet scent. But for some, the music itself provided more than enough high.