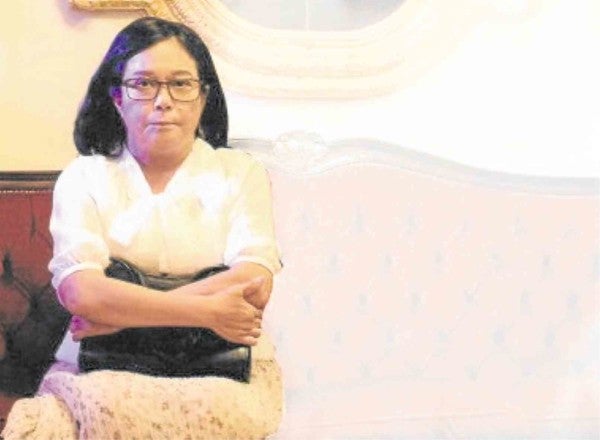 AUNOR. The eyes have it.

With her slight frame, self-effacing demeanor and piercing gaze, Nora Aunor is appropriately cast in Adolf Alix Jr.’s latest drama—as a whistle-blower torn between her conscience and her loyalty to an employer, who can’t “moderate her greed.”

Aunor is exceptional, even if “Whistleblower,” timely and relevant as it is, isn’t—but, that comes as no surprise, because the Superstar’s intuitive acting style always manages to make her characters adjust and adapt to contentious situations.

The operative word is “always,” because some of Ate Guy’s past portrayals were weighed down by miscasting (“Naglalayag”), lapses in thespic choices and directorial judgment (“Dementia”) or choice of material (“Hustisya”).

Yes, an actor can be good in a not-so-good film—but, that isn’t to say that “Whistleblower” is bad. If only for what it aims to arouse in us, it deserves to be seen. But, while it is as much a scathing depiction of greed as it is an indictment of the government’s inability to rid its ranks of corruption, the film is uneven at best.

The movie claims that it’s a work of fiction but, its cautionary ending notwithstanding, it won’t take viewers a long time to realize whose tale it’s based on:

Zeny begins to fear for her life when Lorna detains her illegally for her perceived misdeeds.

Unlike the well-meaning Edward Snowden, however, Zeny’s actions aren’t guided by standards of morality, despite her initial reluctance to work for Lorna—who gets her much-deserved comeuppance when Zeny shares her story with a National Bureau of Investigation operative (Cogie Domingo, whom we should see more of) and top-notch investigative reporter Teresa Saycon (Angelica Panganiban, underutilized in the role).

Nora isn’t given long lines to intone, but the film cleverly utilizes the actress’ emotive gifts to eloquently express a wide range of emotions as Zeny goes through the wringer in the investigation of the pork barrel scam that results from her revelations.

The Superstar is tasked to react to dire situations for the most part—and we know only too well how Ate Guy effectively uses those soulful, tear-soaked orbs to bring out more than the scene requires!

The mix of pain, fear and confusion on her face is truly something to behold when her character realizes that the repercussions of her actions have reached the point of no return.

Nora has never looked more striking and age-appropriate here—but, in another sequence, why did they have to make the legendary actress’ appearance so—unflattering? We would understand if it’s a character requirement, but we’ve never seen any accountant looking like that.

For her part, even if she’s weighed down by the film’s awkward finale, it’s Cherry Pie who comes up with the production’s most textured characterization.

Her portrayal brims with malice and menace, especially in her scene with Nora, where her concealed evil slowly—and frighteningly—unravels as she tends to her orchids. It is one of the movie season’s scariest moments.

Despite its brisk pacing, the movie itself is underwhelming because it fails to generate sustained suspense—it soars and stalls, and doesn’t fully engage viewers’ attention and empathy.

It lacks the subtlety and refinement needed to establish a storytelling tack devoid of manipulation.

The baddies are dyed-in-the-wool evil, which isn’t always a good thing—though, in the midst of the cast’s “akting na akting” moments, we must commend Leo

Rialp’s short but deliciously nasty performance, because he “clarifies” his character’s gray areas with the veiled threats in his lines.

Having said that, we’ve never seen a more impressive array of stars in a screen drama in a long while, with some actors appearing in just a scene or two—Rosanna Roces, Laurice Guillen, Anita Linda, Ricky Davao, Bernardo Bernardo, Celeste Legaspi, Benjamin Alves, Domingo, Panganiban and the always reliable Art Acuña!

But, when the novelty of that stellar lineup wears off, you realize that the film has bitten off more than it can chew. After all, there’s more to drama than big stars and a provocative thematic concept.