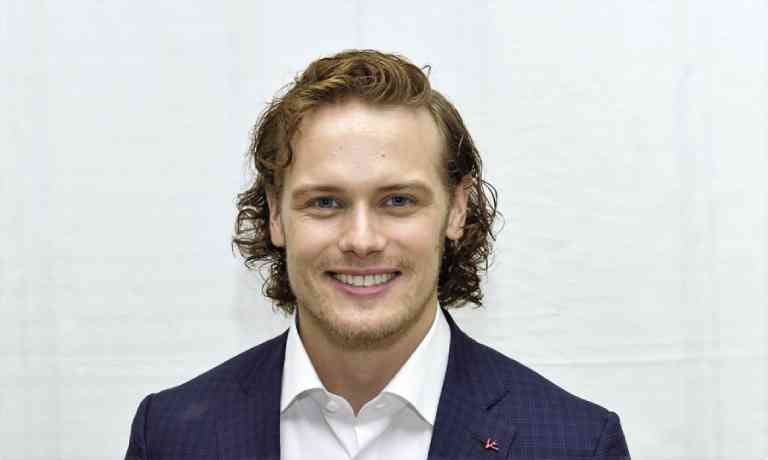 LOS ANGELES—“This is a very fine Italian bit of clothing that they make me wear,” Sam Heughan said with a laugh about the dapper suit he wore as he sat down for this interview. “I am very fortunate. This is all part of the job—it’s incredible.”

“Maybe they will send me more suits,” added the actor who plays Jamie Fraser opposite Catriona Balfe’s Claire Randall in “Outlander.”

This season is quite a departure from the last one. Can you talk about the new challenges for you as an actor?

Paris was, for us, a new venture. It’s a new world not only for us as actors, but also as the characters. It’s uneven ground and a new adventure. The politics and the costumes, of course, were very different.

The relationship that Jamie and Claire have is put under a lot of strain, and not only by the fact that James is still suffering from a trauma (being raped and tortured by his nemesis Black Jack Randall, played by Tobias Menzies) in Season One, but also neither of the characters are being themselves.

Jamie, in my mind, was kind of half that man that he was. He’s been deceitful, manipulative and disloyal. These are characteristics that don’t sit well with him.

Up until now, we have seen him be very straightforward, honorable and honest. So, he’s now in a very poisonous place. That poison seeps into their (Jamie and Claire’s) relationship.

Was it “fun” being out again in the rain and darkness in Scotland?

Yeah, Paris was a break from Scotland, from the rain and the mud. But in a way, it does give us an insight into their characters and move them forward.

So, when we do return to Scotland in the second half of the season, for Jamie and Claire, it feels very much like a healing place, like an old friend.

Jamie actually speaks French. You must have known French way before the show.

I have to admit that at school, I failed my French exam. I didn’t even get an A, B or C. So I was quite excited to speak French. It was important to see another side of Jamie. Obviously, in Season One, we had the Gaelic.

Jamie does speak with a Scottish accent, even when he is speaking French, but it was a nice challenge.

Can you talk about how you have rabid fans all over the world?

The show does have a far reach. I think fans are the same everywhere. They are all big fans of the books or the TV show. In Japan, they’re maybe more polite and organized.

We meet Black Jack Randall (Tobias Menzies) again in this season. Are we going to see a showdown between him and Jamie?

The moment that he (Jamie) finds his salvation comes in the form of Black Jack Randall. The very thing that is his nightmare is actually his cure. When Jamie finds out that Randall is alive, we see him “released” and himself again, because he can now take control of his destiny.

It’s all about power. Like in any traumatic situation, if you don’t get back on the horse, it’s going to plague you.

How are you and Tobias in real life?

We had to get different cars to get here. We can’t stand each other (laughs).

Tobias is a wonderful actor. We are very lucky that on the show, we have all these terrific actors who come in.

Both Tobias and I come from a theater background. We rehearsed it like a play. We went through the dialogue, then blocked it.

It’s about trust as well and I think when you trust the other actors, you then allow yourself to go to darker places.

What is interesting about the show is that it shows how people courted each other then and it seems more romantic, unlike today. How does this resonate with your own ideas about romance?

It is unconventional in how Jamie and Claire were thrust into a marriage before there was even any relationship built or they haven’t even fallen in love.

In Jamie’s scenario, he does fall for her, but that’s what is interesting about this show. They are in this marriage, and they get to know each other.

But then, they come to an understanding that makes their relationship stronger.

I think that’s like a modern marriage. It’s about working through challenges that we face as a couple and that bonds you closer to your partner.

Paris greatly hurts Jamie and Claire. As I said before, it’s poisonous to their relationship. Claire is forced into being a lady of the times—going to dinner and gossiping in salons. That’s definitely not Claire. She’s a woman of action and she wants to do something.

And Jamie is forced into high society, where he is with people he doesn’t even respect and want to be with.

So they lose contact with each other. The only thing that binds them is their unborn child. That moment when that third person in the relationship comes into the room, when they recognize this new life, that’s the moment that brings them back together.

Would you describe yourself as romantic or pragmatic?

It depends what the scenario is, I guess. I am quite pragmatic, but then I do fall in love a lot, especially in Los Angeles.

There’s a lot of beautiful people here. That’s the great part of Jamie Fraser—he’s romantic and passionate, but also level-headed at times. 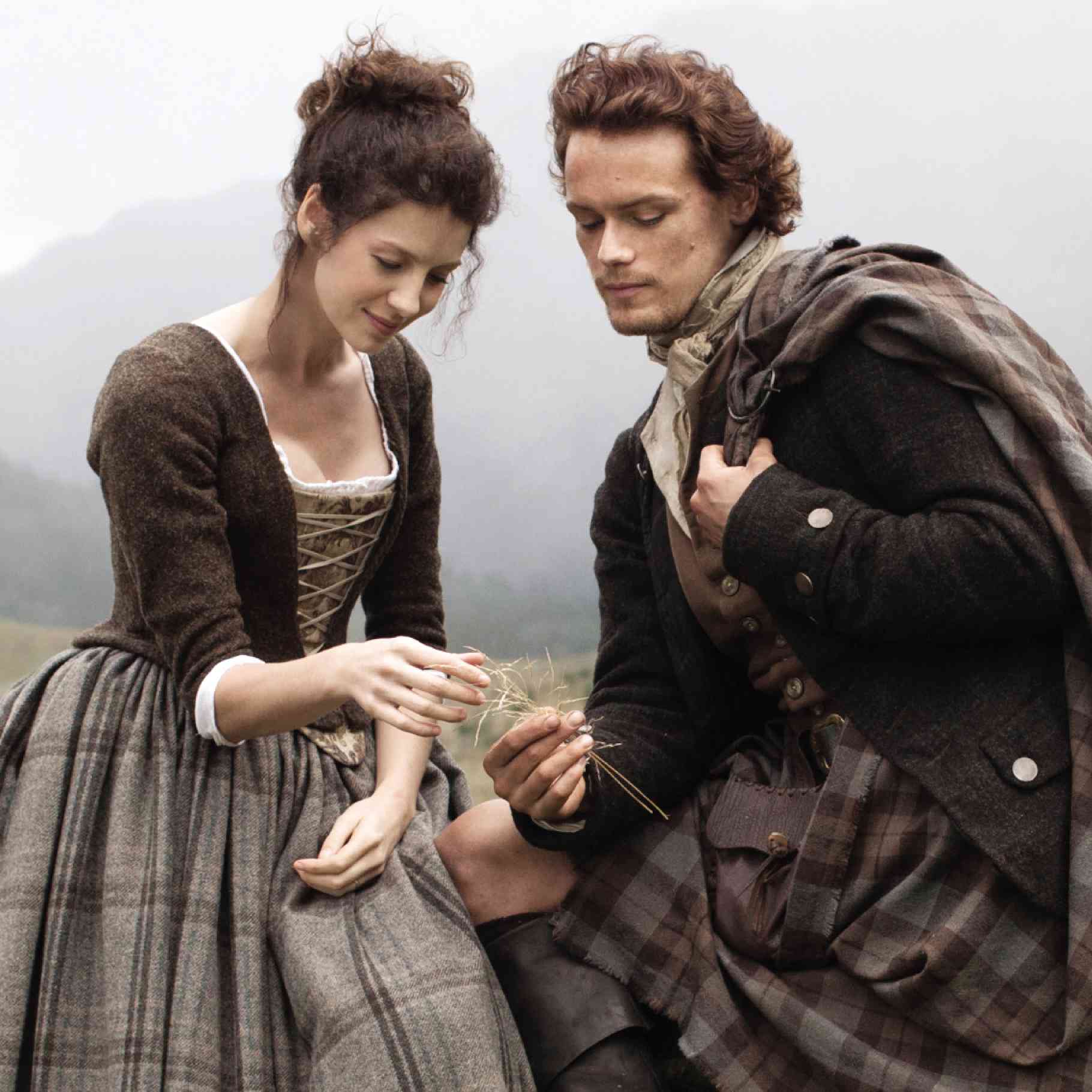 Do you think romance is in the big gestures or in the little everyday things?

It surely is in the little everyday things. We all like to receive a bunch of flowers or be taken out for dinner.

But certainly in their relationship, it’s about the consistency, sensitivity and thoughtfulness.

How is it working with Caitriona?

Caitriona is an absolute joy to work with. She is terrific. She has stamina, humor, intelligence and beauty. I am very lucky to work with her.

You shot that cover for the recent issue of Entertainment Weekly, where you and Caitriona were both topless. Can you talk about that aspect of your job?

I was very proud of the cover. It’s slightly racy. I was adamant that Jamie’s scars can be seen. We had the full back prosthetic on that day and all of his body scars. It’s not about a topless man. For me, it was about this character.

What kind of a sea traveler are you?

Jamie is deeply seasick wherever he goes. He doesn’t travel well. That’s one of Diana Gabaldon’s many interesting characteristics that she drops into these novels.

But I travel well on sea, so if you are offering me a cruise (laughs), I am more than happy to attend.

How has fame affected your personal life?

This show has taken over our lives. It is our life. We shot for 11 months. I have now been on this press tour, which is terrific. But I go back to New York, and we do pickups. That will be 12 months.

So, you don’t really have a life outside the show. Relationships are hard to maintain even with friends or family because there’s very little downtime. But having said that, we have a new family on the set. The cast and crew are very close.

You look so much younger in person.

I am 35, turning 36 this month (April 30), which is slightly terrifying. I am playing a younger man, which is terrific.

How many siblings do you have?

I have a brother who is 5 years older. He is not in the industry at all and lives in the north of England.

Are you doing the movie, “Oxford,” as reported?

I am not doing “Oxford” at the moment.

What else is next for you?

Just coming to Los Angeles has created a lot of opportunities. I have had some very interesting meetings here.