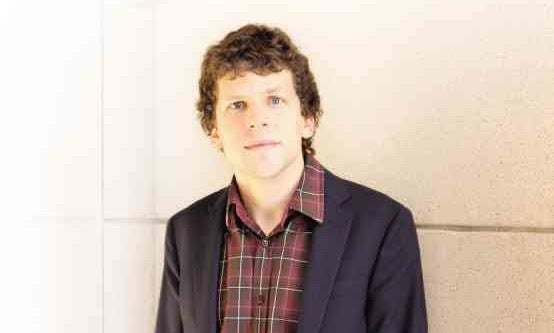 LOS ANGELES–Jesse Eisenberg, who plays Lex Luthor in “Batman v Superman,” is curious about the Philippine presidential election in May.
“So, who do you think should win?” Jesse suddenly asked me in a recent interview at the Warner Bros. lot.

The actor has exhibited his interest in the Philippines in the past. The Oscar- and Golden Globe-nominated actor (for playing Mark Zuckerberg in the acclaimed film, “The Social Network”) knows a sprinkling of Filipino words.

I watched his playwriting debut, “Asuncion,” which starred him and Justin Bartha as two buddies whose liberal outlook is challenged when their new Filipino roommate (Camille Mana) arrives. Jesse has stayed in touch with Camille since that play debuted Off-Broadway in 2011.

The New York native has gone on to write other plays, including “The Revisionist,” which starred him and the legendary Vanessa Redgrave in 2013 (a new production is ongoing in Beverly Hills), and “The Spoils” which premiered in NY last year with him and “The Big Bang Theory’s” Kunal Nayyar. He makes his West End acting debut when “The Spoils” moves over to London in May.

Jesse was reading “Ilustrado,” Miguel Syjuco’s award-winning first novel tracing over a century of Philippine history until he “got sidetracked in something. I read like half of it.” He promised, “I’ll go back to it.”

The 32-year-old—he can pass for 22—certainly leads an interesting life. He revealed that he has been living in Indiana in the past few months to help raise funds for a Bloomington domestic violence shelter, Middle Way House, which is being run by his relative.

In May, he goes to Cannes when “Café Society,” Woody Allen’s 1930s-set Hollywood romance starring him and Kristen Stewart, opens the festival on the Croisette. He reprises his J. Daniel Atlas role in “Now You See Me 2,” which opens in June.

Light and thin compared to his “Batman v Superman” costars Ben Affleck and Henry Cavill, Jesse has been described as a young Woody Allen, especially with his wit and focus when he speaks (and he talks fast, too).

He hasn’t seen the film at the time of our chat. “I would like to see the movie, but I wish I wasn’t in it,” he quipped, referring to his refusal to watch his films. He tends to be critical, likening the experience to seeing pictures of himself.

Jesse cracked with a chuckle, “The really strange thing is that I just saw an action figure of my body over there and it’s probably the same weight.”

Asked if that was his real hair in director Zack Snyder’s blockbuster, the actor, his mane long and curly again, said with a laugh, “If I say anything, I will self-explode. I have a Warner Bros. detonator in my body. I have my ankle bracelet.”

This is your first time to play a villain, right?

I hope so (laughs). The others were unintentional.

Talk about how much you enjoyed being naughty, for a change.

The cliché that these are the characters that are fun to play is true. You can behave in ways that would get you arrested in public, and not only is it acceptable, but it’s required because the character is doing such horrible things.

But what’s really fun about this character is that he has these two personas. He has this public persona, which is charming and fun. He’s bright, seemingly happy and funny. Then, he has this very dark private side—he is envious, insecure, hateful and xenophobic and all those things that we think of when we think of somebody who is disturbed.

How did you come up with your version of Lex Luthor?

The script was fantastic. This character was written by a guy named Chris Terrio. He wrote “Argo.” He is a phenomenal writer… [creating] a character who’s bright but also scary, manipulative, unhinged and irrational.

That’s the kind of stuff I like to do, too, where the character feels like unpredictable, not stable and not in line with what the audience expects or what the other characters seem to expect.

My job was to try to find the emotion behind that and find something that makes him appear not only human and authentic, but actually emotional and struggling.

What kind of mood were you in during the filming?

Chris, who’s now a friend of mine, and I had a good time crafting the character. We would send each other classical music tracks and what we think Lex would have in his study, what kind of props he would use.

But what was really interesting to me was trying to figure out this character’s emotional back story, this guy’s relationship with his father.

It sounds esoteric and unrelated to the movie, but as an actor, it’s all this stuff that you like, all the stuff that when you’re doing 30 takes of something and it’s in the middle of the night and you’re exhausted—you go back to as a crutch to remember what’s driving this person.

When you were a boy, were you a fan of Superman or Batman—and did you read comic books?

I never read comic books growing up. My father loved Superman. He stood in line for “Man of Steel” when the movie came out. My nephew, who’s 4 years old, loves Superman.

But what I really liked about this movie and its script was that for somebody like me who had no prior knowledge of the mythology of these superheroes, the movie was discussing these relevant, modern issues like, should we allow somebody who has so much power to exist?

Then, I think about how my character’s xenophobia, how he isn’t only scared of somebody like Superman, but also paints Superman to the public as a real threat to Earth.

You played journalist David Lipsky in “The End of the Tour,” but you do write in real life. What do you enjoy about writing?

I find the writing that I do to be an extension of the acting that I do. I write plays. I have a play (“The Revisionist”) that’s about to start up here (Wallis Annenberg Center for Performing Arts in Beverly Hills) and a play (“The Spoils”) on the West End in England. Those are extensions of my acting, because I’m thinking about characters.

Talk some more about those two plays.

We start “The Spoils” in the West End in May. It’s again with an actor who films (“The Big Bang Theory”) across the street, Kunal Nayyar.

He plays my friend in the play. I’ve never actually performed in London, but in my second play (“The Revisionist”), Vanessa Redgrave was the main character (in the Off-Broadway production; Deanna Dunagan stars in the Beverly Hills staging).

What I learned from it as a playwright was something really wonderful, which is, that English actors—this is what Vanessa told me—don’t meddle with the script. She was like, “Oh this is an American tradition to try to change the script. We don’t do that.”

When did you start writing?

I was 16 years old and in a performing arts high school. Somebody exposed me to Woody Allen. I was so inspired by him that I wrote a script based on his life.

What lesson did you learn from that?

I learned the lesson of don’t put real people in movie scripts—they’ll sue you. After that, I started writing more fiction.

They’re trying to make a play as real as possible without the concerns for commercialization [unlike in movies].

And now, you’ve been directed by Woody Allen twice. What was that like?

He is the greatest. It was interesting to be able to watch him direct because he has such a great facility with his work. As an actor, it’s easy to work with him because the way he shoots is so simple.

Was there a teacher or someone who inspired you to write?

No, I never got that. If you’re driven, it’s the rejection that will push you farther than the acceptance, because you have an extra fire underneath and an extra thing to write about, which is depression.

After “The Social Network,” did you have contact with Mark Zuckerberg?

You must have enjoyed having a mom who was a professional clown when you were growing up.

It was great. My mom grew up as a socialist hippie. She was a folk-singing clown who created games that all the kids would win and no one would lose.

You have a great sense of humor. How did that evolve from your childhood?

When you’re starting out as an actor—I find this in the Jewish New York community, I feel like you have to caricature yourself a little bit. If you have some success, you can parlay that into playing, I’d say, characters who aren’t so coded as what we think of as that stereotype.

How are you coping with the increasing public attention?

I don’t get that much attention outside of places where you’re explicitly going for it, like this.

What is Kryptonite in your life?

Probably inaction, just not having something to do. That kind of boredom kills me.