Return to the happy place 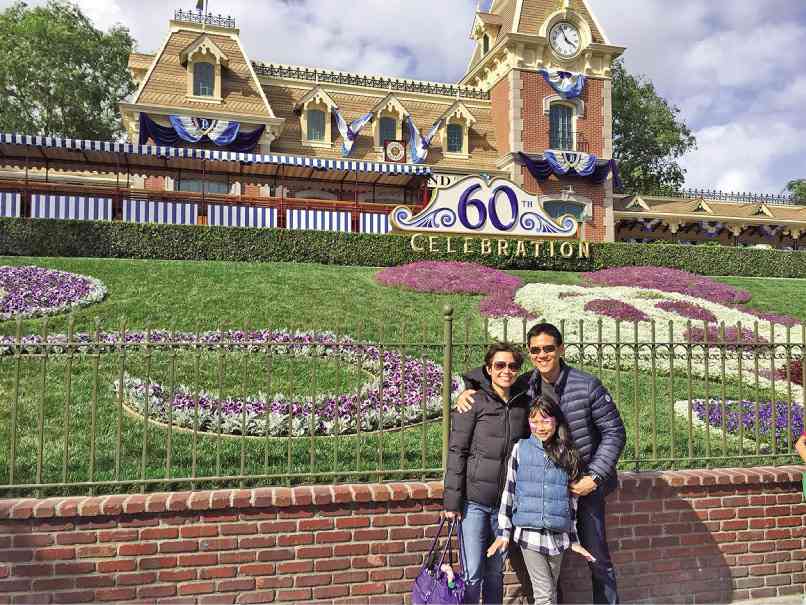 HAPPY 60TH! The author with husband Robert and their daughter Nic

LOS ANGELES—We arrived only a few days ago, just before Easter. Our body clocks are totally turned around, what with sleeping way too early, and waking up while it’s still dark. So what does my little family do amid dealing with monumental jet lag?

We go to Disneyland!

However, the merriment is scheduled to continue until September of this year (which, coincidentally, is when Disneyland Shanghai is set to open).

Today (Easter Monday in LA), the park was busy, but not as crowded as the last time we were here, which was during the hectic Christmas season.

Thankfully, it didn’t feel like all of humanity was squeezing together in the park on one day. There was more than enough elbow room for everyone to share this happy, magical place.

Our little party of 11 (Rob, Nic and myself, plus more family and friends) walked around Disneyland escorted by two wonderful guides—Robert and Valerie.

Incidentally, Robert, a Filipino-American from Honolulu, was one of our guides the last time we were here.

We met up with our red-vested escorts at noon—and hit the ground running.

Of course there were the thrill rides: California Screamin’ (my family is skittish with the large, faster roller-coasters, so we opted out), Goofy’s Flight School (when watching from the side, it only looks gentle … my daughter loved this one), the Matterhorn (the very first roller coaster built in Disneyland … there are actually two sides to it, and we got to ride them both), Hyperspace Mountain (which used to be Space Mountain, but is now “Star Wars”-themed, music and all), The Hollywood Tower of Terror (if you’re not a fan of rides that contain a sudden drop or three, then steer clear of this one), and the “Cars” ride (at the end, there’s a race between your car and another).

There are also a couple of attractions with their own brand of thrills: the classic Pirates of the Caribbean, Star Tours and Indiana Jones Adventure. And those were only the ones we got to ride today!

We also took in one of the park’s shows, “Mickey and the Magical Map.” It’s short and very sweet, with highlights of “Pocahontas,” “Mulan,” “Tangled,” “The Princess and the Frog,” and “Lilo and Stitch.” 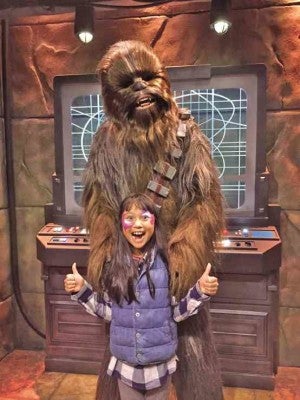 Yes, the use of animation is very good, but I was most impressed with the quality of the singing from the performers.

I whispered to Rob that there are quite a few Broadway performers that got their start in a Disney park, so you’ll never know what the future will bring.

We also got a sneak preview of the coming live action version of “The Jungle Book.” After a short intro by the film’s director, Jon Favreau, we took a look at Baloo, Mowgli, Bagheera, King Louie and all the others in that kingdom. After watching that snippet, I now really want to see this film.

For all you “Star Wars” fans, much of Tomorrowland has been taken over by The Force. Besides Space Mountain being transformed into Hyperspace Mountain, the attraction World of Tomorrow has been renovated into an “all ‘Star Wars,’ all the time” building, containing statues, costumes, autographed photos, and a meet-and-greet opportunity with a “Star Wars” character.

Today, we got to meet Chewbacca, who was the nicest wookie we’ve ever met. He greeted us with plenty of hugs and a sunny disposition. And patrolling Tomorrowland were two First Order stormtroopers who were also gamely posing for photographs, but with a couple of funny lines: “Make it quick—we’re on patrol,” and “You may proceed with image capture.” For sure there were more, but those were the ones I remember.

We were also told that a brand-new “Star Wars” area is being built. Many acres of land will be dedicated to this movie franchise.

And now, after many hours of walking, we are home in bed, tired but very happy. Without a doubt I look forward to my next visit to a Disney park, wherever it may be.

May the force be with you.