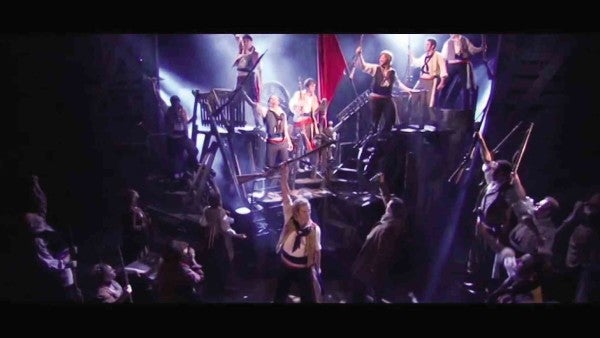 ON SUNDAY night, my daughter and I had ourselves a very nice mommy-daughter date night. We had lovely Japanese food (she had ramen, I had sushi) and for the first time together, saw one of my favorite musicals of all time, “Les Misérables.”

My history with this show is a long and storied one. From choosing “On My Own” to audition for “Miss Saigon” with, to playing Fantine at the 25th anniversary performance at the O2 Arena, I have only love for this amazing show.

At my first listen of the cast recording, I found myself smitten by Claude-Michel Schönberg’s majestic score, as well as by the poetry of Alain Boublil and Herbert Kretzmer’s lyrics.

The show has been running for over 30 years in the West End, and a new production has opened on Broadway. The one currently running in Manila at Solaire is the Asian tour. Of course I had to go see it, and finally introduce my little one to the magic of this beloved musical.

And neither of us was disappointed. Nicole was kept in rapt attention for every single minute of its three-hour running time, occasionally asking questions about what was happening. I found myself sucked in. I was a weeping, sobbing mess for the whole thing.

This production is very different from the original, staged by Trevor Nunn and John Caird. Costumes have more color and the design, rather than that iconic turntable, makes use of projections, some of which are original paintings by Victor Hugo, the author of the novel on which this show is based.

The last time I saw “Les Miz” was in Tokyo, utilizing this new design. The benchmark the Japanese cast had set was very high as far as their discipline with the storytelling, and the amount of heart they committed were concerned. So now, I wanted to see if the Asian touring company would offer the same.

There were already a few things going against them on this Sunday: Many members of the cast were out sick, with some of those going onstage feeling less than completely well.

One of my friends from the Manila production of “Cats,” Mischanna Dellora-Cornish, had sprained her ankle a few days before, so she wasn’t able to perform, and it was she who revealed that this company was missing a few people.

I had my concerns; the cast of “Les Miz” isn’t really all that big (on a normal night, 23 people would be performing, with swings ready to go on). How would it fare with men and women down?

It turns out I didn’t have to be. The remaining actors onstage were able to fill the stage in their absence (a very lovely Holly-Anne Hull was our Cosette for the evening, as Emily Langridge was out sick).

The one remarkable thing about this company is how strong the acting was. Yes, the principals (led by an excellent Simon Gleeson as Jean Valjean) were quite compelling, but it’s the ensemble that deserves much praise.

This was clearly a group of people who acted first, and sang second.

Of course this article would not be complete without talking about Rachelle Ann Go, who as Fantine is equal parts power and heartbreak.

She has grown in leaps and bounds since her turn as Gigi in the West End revival of “Miss Saigon,” her tiny frame able to fill that huge stage with her presence and that voice, and delivering a nuanced, complete performance.

We, in Manila, are only too fortunate that she was cast in this production. For a very long time, she was one of the more underrated performers in Manila.

However, over the last couple of years, she has proven herself able to stand side by side with some of the best in the world. To quote one line from the musical, “Aida,” fortune favors the brave. And this is one very brave young woman. I’m so happy she decided to audition for “Miss Saigon,” and so excited to see what the world has in store for her next.

To the cast, crew and creatives of the Asian tour of “Les Misérables,” my most heartfelt congratulations on a triumphant performance!