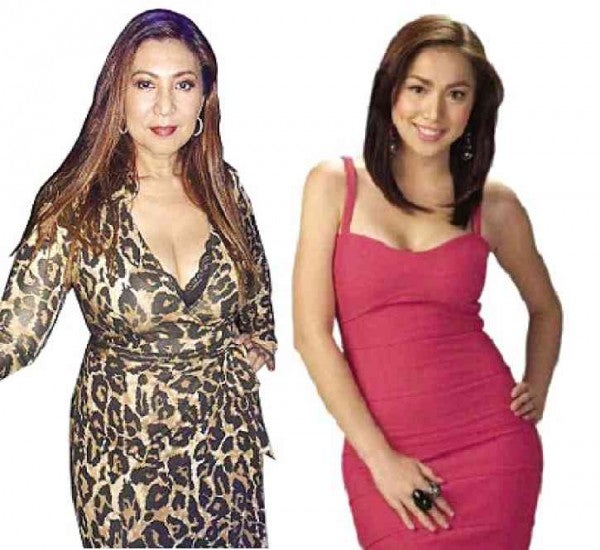 VELEZ AND REYES. Show must go on.

THE FIRST quarter of the 2016 show biz season has been rocked by negative developments like star wars (Vivian Velez versus Cristine Reyes) and stressful working conditions and schedules that have led to the demise of some directors. What can be done to set things right, so that lessons are learned and remedies put in place?

On the “star wars” flak and furor, stellar temperaments are famously or infamously prone to result in periodic conflicts, but most of them are kept in check by firm studio or managerial control.

“Warring” stars are advised by their handlers that some celebrity conflicts could in fact boost careers, by making them appear to be edgy, assertive and “eventful.”

Much of the time, however, the media attention generated is  counterproductive, because the snarling  stars involved come off as off-puttingly self-centered egotists.

That’s why most stellar conflicts are nipped in the bud before they can do too much damage, and both combatants eventually kiss and make up, swearing that they have just had a “misunderstanding.”

They may still hate each other to bits, but for the sake of their careers, and in cognizance of their contractual obligations, the show must go on—even if it’s only “for show!”

In Cristine and Vivian’s instance, however, the damage-control process didn’t work,  so the “it was just a misunderstanding” escape hatch couldn’t work.

Lessons learned in this particular case? More stringent management control should kick in before  the conflict goes public—and it’s too late to do or say anything except—bye-bye!

The second issue of stressful working, shooting and taping conditions resulting in medical problems and even fatal consequences is more difficult to address, because it involves stringent cost-cutting measures that have been basic industry practice for decades.

It took a long time for child performers to get a more equitable deal, so adult talents will have to fight even harder to not  have to work till midnight—and longer.

In the case of directors, the problem is aggravated by the fact that they’re supposed to be on top of a production and most or even all of the factors involved.

—So, even as actors  take breaks between camera setups, Direk has to be awake and available to make all sorts of decisions, including small stuff like the right color for an actress’ shoes—etc., etc.!

Given this rigorous reality, the solutions have to include a greater distribution of the director’s decision-making functions, so that he sweats only the big stuff and can thus get the time to recharge his batteries.

Most directors push themselves to the limit because they think they’re still “young enough” to “take” it. Tragically, some of them are in fact no longer as young and fit as they think they are. Unfortunately, they end up realizing it—too late.