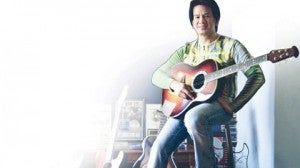 Joey Generoso is the face of Side A. The singer has been the band’s front man since 1986 when Rodel Gonzales, Side A’s original lead singer and saxophonist, left.

Generoso joined the group when it was about to become the biggest pop act in the local music scene. He saw it all—screaming girl fans, money, perks, everything that defined fame. But he says he has remained the same old Joey that friends and family know. He eats in the same Chinese restaurants in Manila and Quezon City, and hangs out at Cartimar in Pasay.

The Inquirer had an e-mail chat with Generoso before he left with Side A and Martin Nievera for some shows in the United States. Side A and Nievera will perform back-to-back on November 11 at the Smart Araneta Coliseum, as part of Viva Entertainment’s 30th anniversary celebration.

You were asked to join Side A when Rodel Gonzales left the band. How serious were you about becoming a full-time musician at the time?

I considered myself a full-time musician even before I joined Side A. I’ve performed in Hong Kong and Singapore. But when Side A got me, I was overwhelmed. I took the opportunity to do my best.

The band reached the heights of popularity with you as lead singer. The girls went crazy, but some guys branded Side A’s music as “pogi” music, which meant they found the songs rather “pa-cute.” Were you aware of this, or do you think these guys were just plain jealous of Side A’s fame?

Really? I wasn’t aware of that, but everyone is entitled to their own opinion. We never get affected by negative remarks or comments. In our 25 years in the music industry, we did not experience conflict with other musicians. Masarap ang samahan ng mga musikero.

The band’s cover of Labuyo’s “Tuloy Pa Rin Ako” was a brilliant move, because the original version was not well-known to the pop audience. Whose idea was it to cover the song?

Fellow musicians would watch Side A gigs and jam with the band. One night, Mon Espia, one of the composers of “Tuloy Pa Rin,” jammed with us at Hyatt Hotel. Since then we have included it in our repertoire but we play it in a fast beat.

Did fame ever get to your head?

I’m still the same Joey. Fame is only temporary. What’s important is what I can impart to our fans—what they’ll remember me for when I retire from the music scene. I still go to places where I used to hang out, like in Sun Wah and Delicious restaurants in Ongpin, Ma Mon Luk in Quezon Avenue and the Cartimar shopping area.

How did you handle the money that you earned with the band over the years?

My wife takes care of it. We bought a condo on Taft Ave. in front of La Salle. We rent it out to students. My wife also put up a laundry business.

Which Side A album do you think has captured the band’s most creative period?

I should say the “White” album! It gave us all the breaks and opportunities, including shows in different parts of the world.

Is there any difference between the way the band handles its career in the 1990s and the present?

Wyngard Tracy used to be very strict with us, especially during provincial and overseas tours. He eased up a bit through the years, until he passed away. We have a new manager, Celeste Pacana, but we have maintained the same level of discipline we imbibed from Wyngard.

What motivates you as an artist?

Young musicians motivate me to become a better artist. But, first and foremost, it’s my family that inspires me. Whenever I’m tired, I just think of them, especially my kids. They keep me going.

What’s the greatest thing you’ve learned in the music business?

You have to work unconditionally to achieve success. Always keep yourself grounded. Also, you should appreciate the people who helped and guided you to attain success.

Name three artists who influenced you as a singer.

Read Next
What stars want written on their epitaphs
EDITORS' PICK
SSS: Members on home quarantine due to COVID-19 can apply for sickness benefit
Gear up and get ready to play with Yamaha Mio Gear
PH to send 584 athletes, 161 officials to Vietnam SEA Games
Acer starts the year off strong with the Aspire Vero National Geographic Edition
Kalinga, Ifugao, Mt. Province, N. Samar will be under Alert Level 4 from Jan 21-31
Mobile COVID-19 vaccination for commuters, transport workers set at PITX
MOST READ
Mayor Vico counters vice mayor: ‘Did I say anything about his family?’
Imelda Marcos trends on Twitter after octogenarian jailed for allegedly stealing mangoes
Municipal court in Pangasinan sets arraignment for ‘Lolo Narding’
Villar backs implementation of EDSA decongestion blueprint
Follow @Inq_Lifestyle on Twitter
Don't miss out on the latest news and information.