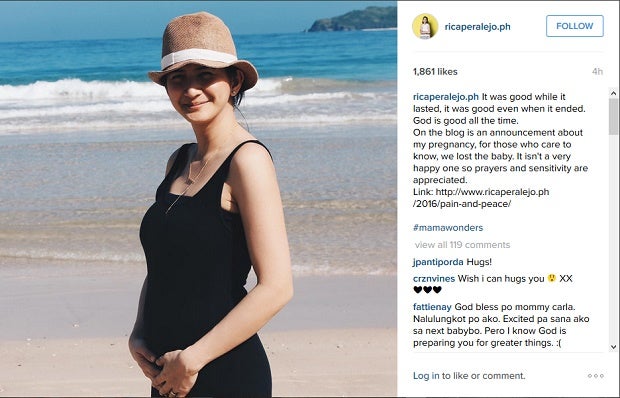 On a blog post on Thursday, she revealed the details on how she lost an unborn child at six weeks.

“For those who don’t know, I found out I was pregnant sometime in January, announced it last Sunday to the public, and on Tuesday found out that my baby no longer has a heartbeat,” she wrote.

“My first ultrasound showed heartbeat and my second didn’t anymore. The size of the baby also remained the same despite the 6-week-gap,” she added.

Last Sunday, Peralejo posted on Instagram that she was expecting a baby together with her sister Paula. They were supposed to give birth one month apart.

“Many celebrated with us when we announced the ‘twin pregnancy’—of my sister and I getting pregnant at the same time. So I feel it is only apt to inform you guys of the sad news, to honor the joy you shared with me. (In other news, Paula is in great shape! She and her baby are doing just fine, praise God!), Peralejo wrote on her blog.

“It was good while it lasted, it was even good when it ended. God is good all the time,” she posted.

Such would have been Peralejo’s second child with husband Joseph Bonifacio, a Christian pastor. FM/RAM