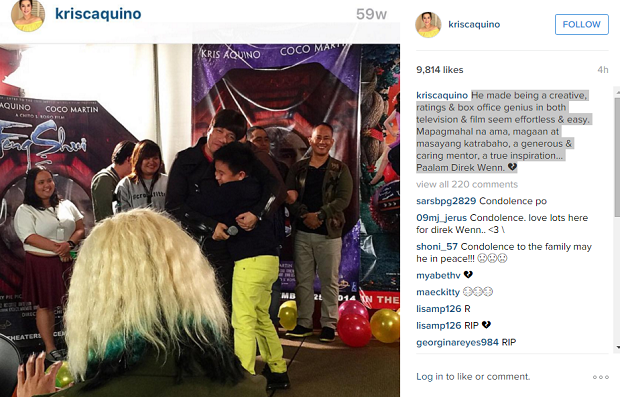 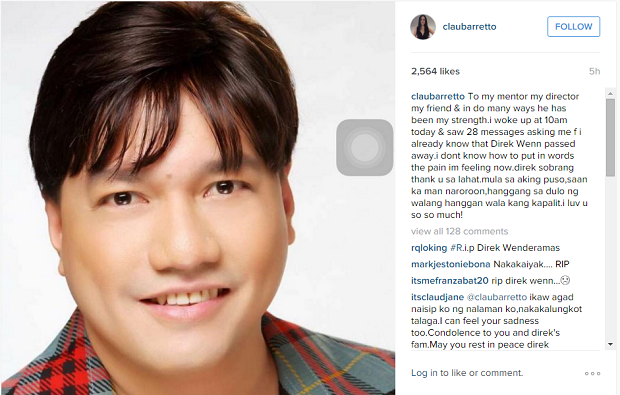 Some celebrities who were very close to the late box office director Wenn Deramas took to social media to express their grief over his death.

In her message, Aquino hailed Deramas as a “true inspiration.”

“He made being a creative, ratings & box office genius in both television & film seem effortless & easy. Mapagmahal na ama, magaan at masayang katrabaho (A loving father, easy and fun to work with), a generous & caring mentor, a true inspiration… Paalam (Goodbye) Direk Wenn,” she said.

The actress previously worked with Deramas in “Sisterakas.” Deramas also took Aquino’s son Bimby under his wing when they filmed “The Unkabogable Praybeyt Benjamin” in 2014.

Meanwhile, actress Claudine Barretto said that the 49-year-old director has been her “source of strength.”

Barretto, who worked with Deramas in various projects such as “Mula sa Puso,” “Saan Ka Man Naroroon” and “Marina,” said that the director’s death cannot be put into words.

“To my mentor my director my friend & in do many ways he has been my strength.i woke up at 10am today & saw 28 messages asking me f i already know that Direk Wenn passed away.i dont know how to put in words the pain im feeling now.direk sobrang thank u sa lahat.mula sa aking puso,saan ka man naroroon,hanggang sa dulo ng walang hanggan wala kang kapalit (Direk, thank you so much for everything. From my heart, wherever you are, until the end of eternity, you are irreplaceable).i luv u so so much!” she posted on Instagram.

One of the first people who confirmed the death of the director, Vice Ganda said that the pain he is felt is “bone-deep.”

(Such a lonely day. The sadness (I feel) is bone-deep. Goodbye, Direk Wenn. I love you very much.)

She posted a photo saying “Rest in Peace” with a caption, “Mahal kita (I love you).”

Delas Alas and Deramas clashed last December as their films went head-to-head to claim the top spot in terms of revenues in the 2015 Metro Manila Film Festival.

In the end, it was Deramas’ “Beauty and the Bestie” which prevailed over “My Bebe Love” and snagged the title of being the “highest grossing Filipino film of all time.”

Deramas died due to cardiac arrest shortly after his sister died early Monday morning. He was 49 years old. AJH/RAM