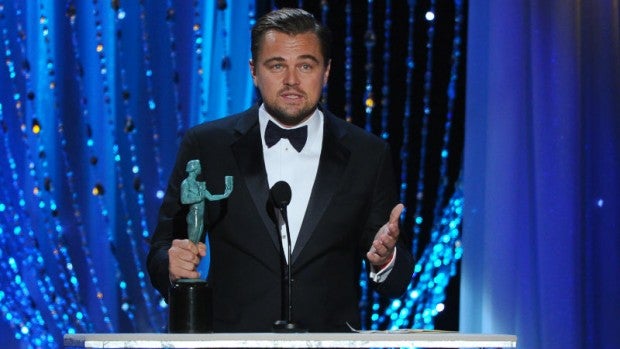 Leonardo DiCaprio accepts the award for outstanding male actor in a leading role for “The Revenant” at the 22nd annual Screen Actors Guild Awards at the Shrine Auditorium & Expo Hall on Saturday, Jan. 30, 2016, in Los Angeles. Invision/AP File Photo

JERUSALEM, Undefined—When the top nominees at this year’s Oscars, including Leonardo DiCaprio, Jennifer Lawrence and Matt Damon, open their goodie bags, inside will be a potentially controversial gift.

Israel has offered the 25 nominees for the top five awards, plus Chris Rock who will host Sunday’s ceremony, a personalized tour of the country valued at up to $55,000 including first class flights and luxury hotels.

The trip is part of a traditional gift bag handed out by a marketing firm around the time of the Academy Awards—this year reportedly worth more than $200,000 and including items such as ultra-expensive toilet paper and a “Vampire breast lift.”

The tourism ministry says the tour packages are designed to show the real Israel.

But critics have accused the country of using such promotional campaigns to whitewash alleged abuses against Palestinians, including the blockade of Gaza and occupation of the West Bank.

Sam Gee, founder of the exploreisrael.com agency that came up with the idea, said it was part of a plan to bring “influencers” to Israel.

“The Oscars is a good shot because there isn’t that many (nominees) and we were able to give a really high-value trip,” he said, comparing it to the Grammy music awards where 150 packages would have to be distributed.

The battle over celebrities in the region is hardly new. Frank Sinatra appeared at a benefit concert calling for support for a Jewish state in the Middle East even before Israel’s creation in 1948.

Yet the success of anti-Israeli campaigners—most prominently the Boycott, Divestment and Sanctions (BDS) movement—in increasing criticism of Israel’s actions, as well as a fresh wave of Palestinian violence, has put renewed focus on the country’s image.

“People tend to follow the celebrities. They tend to do what they do,” Gee said.

Social media have greatly amplified the reach of celebrity endorsements.

“Each one of them potentially has millions of followers. Every celebrity that is coming to visit us can put online a selfie somewhere and the value is huge,” tourism ministry director general Amir Halevi told AFP.

When Kim Kardashian and Kanye West visited Israel in 2015, the mayor of Jerusalem reportedly asked them to become ambassadors for the city and to tell people that “everyone is welcome in Jerusalem.”

It is unclear whether the status of east Jerusalem, which was occupied by Israel in 1967 and later annexed, was discussed. The Palestinians see east Jerusalem as their future capital, while Israel views the entire city as its undivided capital.

Gee said they hoped nominees taking up the package would share their experiences on social media.

“We would definitely hope that if we give them a trip like this they would go ahead and tweet and be on social media that they are having a good time and we would get exposure out of it, but there is no strings attached,” he said.

Asked whether the celebrities would be permitted to visit Palestinian cities such as Ramallah in the occupied West Bank if they wanted, Gee said yes.

But the offer also has the potential to backfire.

Nominees Mark Ruffalo and Mark Rylance have been openly critical of Israel’s practices, including its ongoing blockade of Gaza.

Mike Leigh and Ken Loach, two of Britain’s most famous film directors, have urged the nominees to give their prizes to Palestinian refugees.

“If celebrities were to go on record, either before, during, or after a trip, with negative comments, it could result in a negative impact, rather than the desired positive associations,” said academic Margaret Campbell, who has written about the potential risks of celebrity endorsements.

“Similarly, if a celebrity went on the Israel trip and said something ridiculous or inappropriate, it could backfire.”

Palestinian campaigners say their cultural sector is often limited by Israeli restrictions, with circus performer Mohammed Abu Sakha among those currently detained without charge, for example.

Omar Barghouti, a rights activist and co-founder at BDS, said Israel was increasingly fearful of the growing boycott campaign.

“Since launching the so-called Brand Israel campaign in 2005 to counter BDS, Israel has multiplied its attempts to bribe, intimidate or otherwise coerce celebrities to toe its line,” he told AFP.

Despite the risks, there are reasons why celebrity endorsements are pursued: they often work.

A 2012 study led by a Harvard Business School professor estimated that they led to a four-percent increase in sales for companies.

Ofer Zalzberg, senior analyst for the Middle East with the International Crisis Group think tank, said celebrity endorsements matter for Israel as they show the country is peaceful enough to visit.

A wave of Palestinian knife, gun and car-ramming attacks since October has damaged the country’s tourism industry. But the celebrities themselves also run risks.

He had previously been claimed by many pro-Palestinian activists as a supporter of the cause. When the video was posted on his social media channels, he was criticized by Arab fans.

Barghouti of BDS admitted it was “disappointing” to see Ronaldo supporting an Israeli brand, but stressed