Melissa Manchester back to back with David Pomeranz on April 6 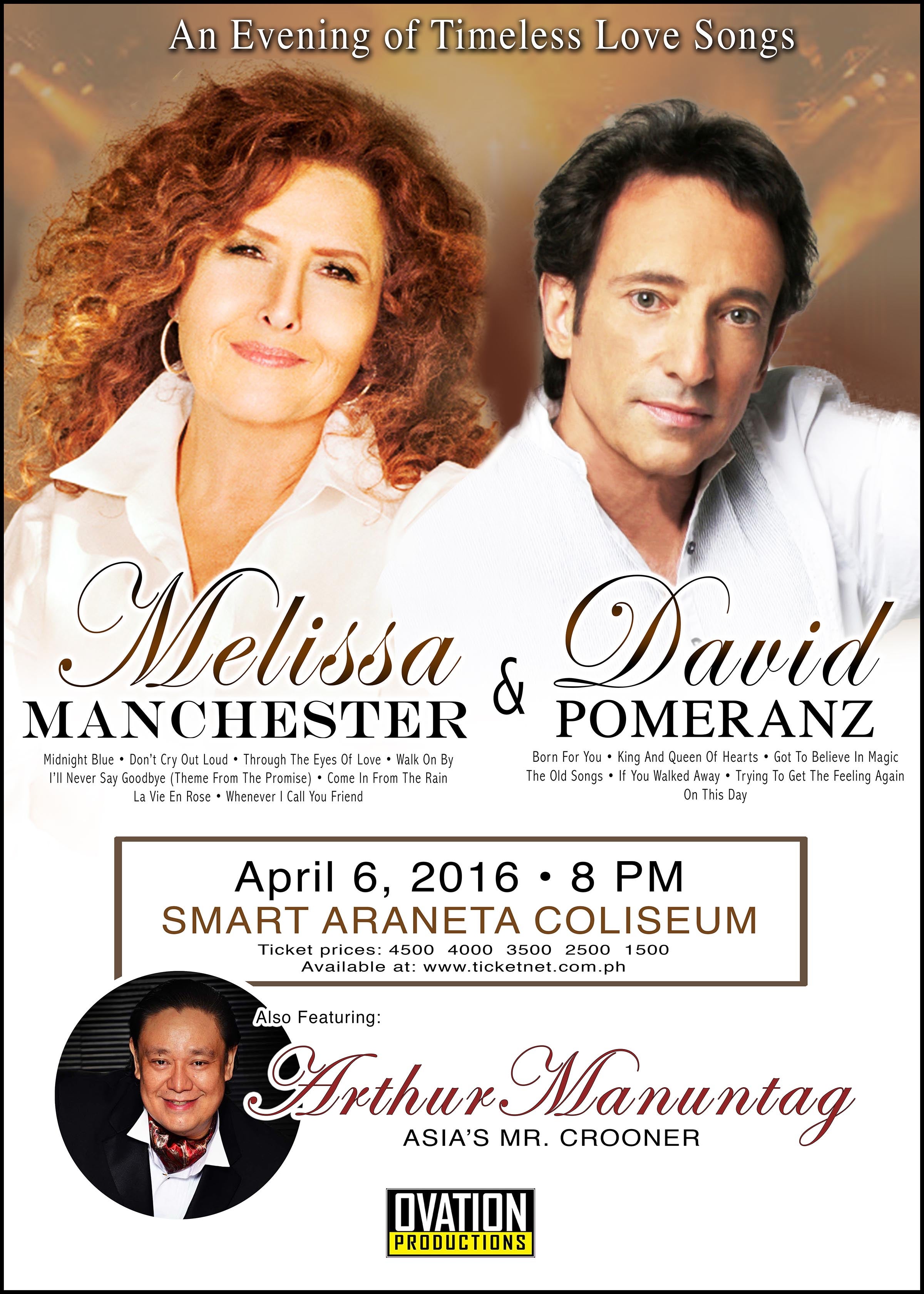 Music lovers will be in for a wonderful and entertaining treat from two of the biggest names in adult contemporary music when Melissa Manchester and David Pomeranz visit Manila to do a back-to- back concert on April 6 at the Smart Araneta Coliseum in Cubao, Quezon City.

Dubbed “Melissa Manchester, David Pomeranz Live,” the twinbill from Ovation Productions shall also feature balladeer “Asia’s Mr. Crooner” Arthur Manuntag as special guest in what is considered as one of the biggest concert events in this summer’s musical calendar.

Melissa Manchester is one of the most enduring artists in popular American music whose extraordinary career began in her native New York, where she studied songwriting with Paul Simon. As a solo artist/pianist, she performed in the clubs of Greenwich Village and Manhattan’s Upper West Side where she met Bette Middler.

Following her stint with Bette Middler as a back-up singer, Manchester embarked on a solo career which earned critical acclaim and commercial success for her recordings in the adult contemporary genre starting in the 1970s.

Her albums served to establish her as one of the most compelling singers/songwriters in contemporary music, including “Home to Myself,” “Bright Eyes,” “Melissa,” “Lovers After All,” “Whenever I Call You Friend,” and many more. Her hit singles include “Midnight Blue”, “Dont Cry Out Loud”, “Through the Eyes Of Love”, “Walk On By”, “I’ll Never Say Goodbye (Theme from The Promise), “Come In From the Rain”, “La Vie En Rose”, “Whenever I Call You Friend”.

She won the Grammy Award for Best Pop Female Performance in 1982 for “You Should Hear How She Talks About You” after being nominated twice in the same category in 1978 and 1979.

In 1980 she became the first artist in the history of the Academy Awards to have two nominated movie themes in the same year: “Ice Castles” and “The Promise.”

On February 10, 2015, she launched a self-made album, “You Gotta Love the Life,” her first studio album since 2004, which celebrates 40 years of music making.

David Pomeranz, on the other hand, is one of the most successful and prolific songwriters and performing artists on the scene today. His songs and recordings, such as “On This Day,” “King And Queen Of Hearts,” “Born For You,” “Got To Believe In Magic” and “The Old Songs,” have sold over 40 million copies worldwide, earning him a total of 18 Golds and 20 Platinum records, while his live concerts have delighted and entertained millions all over the world.

He has recorded nine solo albums, including “It’s In Every One of Us,” “The Truth Of Us,” “Time To Fly,” “On This Day” and “Born For You – His Best And More,” which have sold over 500,000 copies in the Philippines alone, making it the largest-selling international Pop album in the country. David’s hit singles are “Born For You”, “King And Queen of Hearts”, “Got To Believe In Magic”, “The Old Songs”, “If You Walked Away”, “Trying to Get the Feeling Again”, among others.

His latest CD, “You’re The Inspiration,” which contains his versions of some of the most beloved Pop songs of all time, was released in February, 2015.

His “Trying To Get The Feeling Again” was recorded by Barry Manilow in 1975, and Manilow’s version became Pomeranz’s first Number One hit. In 1980, Manilow struck gold again with his version of “The Old Songs,” which quickly became Pomeranz’s second chart-topping single.

His songs have also been heard in numerous motion pictures, such as 20th Century Fox’s “Big” (starring Tom Hanks), Warner Bros.’ “Fire Down Below” (starring Steven Seagal) and Paramount’s “Man, Woman and Child,” with Martin Sheen, among others.

“Melissa Manchester and David Pomeranz Live” is presented by Ovation Productions. Tickets are available at Ticketnet outlets and at www.ticketnet.com.ph.