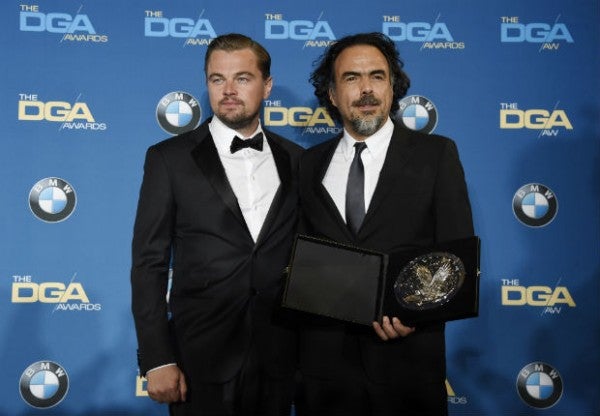 LOS ANGELES — Mexican filmmaker Alejandro Gonzalez Inarritu’s bid for Oscars glory was boosted Saturday as he took top prize at the Directors Guild of America honors — seen as a bellwether for the Academy Awards.

Inarritu was crowned best director for revenge and survival epic “The Revenant,” three weeks ahead of the glittering culmination of Hollywood’s annual awards season.

He becomes the first director in the Guild’s history with back-to-back DGA wins, 12 months after picking up the prize for dark comedy “Birdman,” and is vying to repeat the feat at the Oscars.

The 52-year-old has already scooped the Golden Globe for best director for “The Revenant,” about 19th century fur trapper Hugh Glass, played by another Oscar hopeful, Leonardo DiCaprio.

“I feel humbled, I feel extremely lucky and more than anything, extremely thankful,” Inarritu told his fellow filmmakers at the Hyatt Regency Century Plaza hotel in Century City.

“This feels like a hug from my peers which helps to make the winter feel warmer.”

A tearful Inarritu paid tribute to his father who died two years ago, and to the many Mexican staff working behind the scenes at the hotel.

“That’s not the people that Donald Trump has described at all, let me tell you,” he said, in a swipe at the billionaire presidential candidate’s views on immigration.

Inarritu pipped Britain’s Ridley Scott, nominated for space thriller “The Martian” about an astronaut stranded on Mars — another film seen as top contender for Oscar glory on February 28.

“The Martian,” starring Matt Damon, won two awards at the Golden Globes in January — best comedy film and best actor in a comedy for Damon.

The 78-year-old Scott has however never triumphed at the DGA awards or at the Oscars.

The DGA awards are seen as a key predictor of Academy Awards success, particularly for the best director prize, as almost all recent winners has gone on to win the Oscar for best director.

Inarritu’s success comes after fellow Mexican Alfonso Cuaron won the DGA top prize in 2014 for “Gravity,” and went on to win the Best Director prize from the Academy.

The ceremony included a new award recognizing the directorial achievement of a first-time feature director, which went to British novelist and screenwriter Alex Garland for Ex-Machina.

“The Revenant” has been one of the big winners in Hollywood’s annual awards season, having already picked up three Golden Globes and bagged the leading man prize for DiCaprio at the 22nd Screen Actors Guild Awards a week ago.