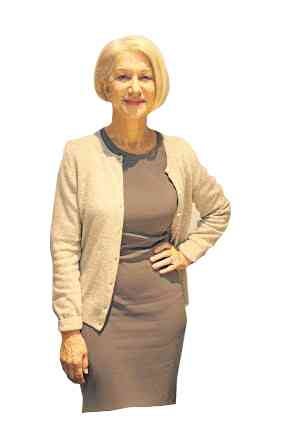 LOS ANGELES—Helen Mirren’s ebullient mood one recent Sunday morning was tempered by the mention of the late Alan Rickman, who costars with her in his final movie, “Eye in the Sky.” “Oh, my lovely Alan,” sighed Helen when she heard the name of the actor popularly known as Professor Severus Snape in the “Harry Potter” series.

Helen and Alan first met in 1998 when he stepped in for an actor who was ill a week before rehearsals began for “Antony and Cleopatra” at the National Theatre in London.

The actress, who wore a cashmere cardigan over an Armani dress, told The Hollywood Reporter about that first meeting: “I was quite intimidated when I first met Alan. He’s quite an imposing-looking man. He was tall [and] had this large head with this incredible Roman emperor kind of visage and a wonderfully sardonic expression on his face… He was also very twinkly, kind, gossipy and generous. Alan loved to go to restaurants, to sit and chat, drink some wine and gossip about actors and acting, directors and plays.”

“Obviously, this was his last movie,” Helen said about “Eye in the Sky,” where she and Alan play military leaders behind a top secret drone strike, but things get complicated when a 9-year-old girl enters the kill zone. Aaron Paul and Barkhad Abdi (“Captain Phillips”) also star.

“Wasn’t Alan wonderful in this movie?” Helen asked aloud about the velvet-voiced baritone who died on Jan. 14 at the age of 69. “He was so good. It was classic Alan, because it was so full of intelligence and character and yet so minimal. He was an absolute genius! We’ve lost him far too early. He would have had many great roles to come.”

“Alan was a truly extraordinary, committed and thoroughly decent person,” added the actress. “I’m still in a state of shock about it. I looked at a picture of him today and thought, I can’t believe that I’m not going to see Alan again.”

The Oscar- and Golden Globe-winning actress for “The Queen” rued that she and Alan did not get to see each other at all while they were shooting the drama-thriller directed by Gavin Hood. “We shot the film in completely different worlds,” the actress explained. “I was long gone from South Africa when Alan arrived to shoot his part. We never got to discuss our roles together, which is a shame.

“Actually, it was very interesting casting by Gavin, because Alan is not the person whom you would automatically think, ‘Oh he would be great (as a military commander).’ On the contrary, it was casting against type.”

Helen herself does not usually play a military figure, but in the film, she portrays a UK-based colonel in command of a drone operation to capture terrorists in Kenya. “The best thing about playing someone in the military is that it takes you about five minutes to get ready in the morning,” she quipped with a laugh.

“You don’t have to do hair and makeup. You put your camouflage on, and you’re good to go! One had to let go of a certain level of vanity. Camouflage is not the most flattering on me (laughs)—in particular, with my Russian shape.” Helen’s father was Russian.

The night before our interview, Helen met Idris Elba for the first time at the SAG Awards. Amid talk of the lack of diversity in this year’s Oscar nominations, Idris won two SAG Awards trophies for the film, “Beasts of No Nation,” and the TV series, “Luther.”

“He’s a very cool guy,” Helen enthused about the actor being bandied about as the next James Bond. “And he’s sensible. He’s a Brit. The good thing about us Brits is often, we’re sensible. That was the impression I got. It was the first time I had met him.”

The actress gushed, “Idris was just very charming and so gorgeous that actually, I could hardly hear what he was saying (laughs) because I was thinking, oh my God, you’re so gorgeous!”

Helen admitted that she still gets starstruck when she meets actors and personalities like Idris “not so much for handsomeness. I get ‘movie star-itis.’ I also get what I call ‘Queen-itis.’ When I meet the Queen (of England), I become a babbling idiot. I have the same thing with movie stars. I get such ‘movie star-itis.’”

She added, “It was incredibly exciting to sit there (at the SAG Awards) and be in the same room as Carol Burnett (who received the lifetime achievement award). How amazing was that?”

But in the case of director Taylor Hackford, who would become Helen’s husband, their first meeting left Helen unimpressed. She was auditioning for his film, “White Nights.”

“When we first met, I didn’t like Taylor at all,” Helen said. “It was that classic rom-com sort of thing, where they hate each other. I don’t think he hated me. I didn’t hate him, but I was very cross with him because he was 20 minutes late to our meeting. I was walking out of the door in a huff as he walked in through the door.

“If I’d walked out, maybe my whole life would have been completely different. But that’s what love is, isn’t it? It is a wonderful, random accident for us all.”

Asked what she has learned from the director, whose credits include “Ray” and “An Officer and a Gentleman,” Helen answered, “We’re very different, but I’ve learned a huge amount from him. There are some things I should have learned and I never did learn to this day, including returning phone calls.

“He’s wonderful on the phone. If he gets a phone call, he returns it immediately. He’s one of those detail-oriented people. I admire him very much. It’s my failure in many ways not to have learned as much from him as he’s been there sort of offering to me. But then, it’s a two-way street, as well. I’m sure he’s also learned things from me.”

Helen said that he and Taylor have experienced ups and downs in their over 30 years together (they got married in 1997 after being together for over a decade): “Watching children grow up and now, we have a grandchild, which is incredibly exciting. You confront tragedies and difficult things. You go through a lot together.” Helen’s younger brother, Peter Basil, died in 2002 in the Philippines, where he lived—he fell in love with the country and stayed.

“You build houses together,” she continued of her union with Taylor. They just finished building a house in Lake Tahoe, California. “If anything’s going to make you divorced, it’ll be from building a house together. If you get through that, that’s a huge triumph!”

Despite a successful film career, Helen makes it a point to return to theater—she starred in “The Audience” in Broadway last year and won a Tony Award in her return to the role of Queen Elizabeth II.

“I do feel the need to go back onstage,” she stressed. “It has a lot to do with the fact that my dedication and my feeling of being an artist began when I started working in theater. I wasn’t interested in film or television. I thought it was unimportant in comparison to theater which, to me, was almost like a church. I felt that theater fulfilled a profoundly important role in human life and culture.

“When I feel that I have to go back every three or four years, it’s partly poking back into that feeling of being part of an important thing in our culture. And also the fact that theater takes so much energy, and you don’t know that you’re capable of it!

“I’m frightened that if I let it go for too long, I’ll never do it again—because I won’t have the energy or feel the capability. It’s demanding on the voice, on your physical energy. I think the fear takes me back, as well.”

At 70, Helen is enjoying a great career. “I’m very lucky,” she declared. “Here I am sitting in front of you because I’ve just done a movie, and I’m about to start work on another one (David Frankel’s ‘Collateral Beauty’). I just did six months in the theater, so I’m unbelievably lucky.

“Certainly in my lifetime, I’ve watched brilliant actresses, as they reached their late 40s, 50s, really find it very difficult to find work. That’s really unfair! A parallel I’ve watched is not-so-great actors having very long and successful careers, because there are many more roles available to them!”