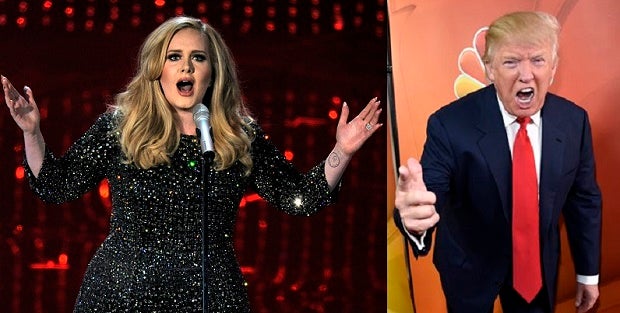 In this Feb. 24, 2013 file photo, singer Adele (left) performs during the Oscars at the Dolby Theatre in Los Angeles. Adele has objected to the use of her song ‘Rolling in the Deep’ in the campaign of Republican front runner Donald Trump. AP

Trump, an apparent fan of Adele who was spotted at her concert in November in New York, has regularly played her hit “Rolling in the Deep” at his rallies.

READ: Trump: I could shoot someone and not lose votes | Trump under fire for sexism after vulgar Clinton jibes

“Adele has not given permission for her music to be used for any political campaigning,” a statement from the singer’s spokesman said.

Adele, whose blockbuster success has been attributed to her ability to attract audiences across wide demographic lines, did not mention Trump by name.

Adele in the past has declared herself as a staunch supporter of the Labor Party in her native Britain although — in a potential area of common ground with Trump — she has complained about the heavy tax bill since becoming rich.

US candidates, especially on the right, have repeatedly faced a backlash when playing well-known songs.

Trump earlier in his campaign played Neil Young’s “Rockin’ in the Free World” and R.E.M.’s “It’s the End of the World as We Know It (And I Feel Fine),” triggering furious protests from the artists known for their left-leaning views.

But Trump on Monday picked up an endorsement of sorts from one prominent musician.

Azealia Banks, the New York rapper who like Trump is fond of heated exchanges on Twitter, offered a backhanded compliment as she said she planned to vote for Trump.

“I think Donald Trump is evil like America is evil and in order for America to keep up with itself it needs him,” Banks wrote in a series of late-night tweets.

Yet Banks — an African American woman who in the past has accused the music industry of double standards and declared her hatred for “fat white Americans” — also offered more straightforward praise for Trump.

She said that the real estate tycoon “is the only one who truly has the balls to bust up big business.”

Referring to the Democratic candidates, she said: “Just because Hillary Clinton and Bernie Sanders say nice things about minorities doesn’t mean they actually mean them.”

Trump during his campaign has accused Mexican immigrants of being rapists and called for a temporary ban on all foreign Muslims entering the United States.