THE GOAL is to entice people to experience the great outdoors.

Even filmmaker Ellen Ongkeko-Marfil is perturbed by the idea that her new indie film, “Lakbay2Love”—which promotes the love of biking, fitness and nature—may push people to an early grave.

Recently, media reported on accidents involving cyclists and motorists—including a road mishap that resulted in the death of Lorelei Melevo, a 30-year-old biker and single mom.

“Some people, including some staff members, who have seen my film were motivated to go biking,” she told the Inquirer. “I worry that I may be bringing them into peril!”

Still, she believes that a broader audience should watch her film in order to change prevailing notions of biking and bikers.

“I want people to understand where cyclists are coming from,” she explained.

She has learned to admire the bikers she met while filming. “They’re really passionate because they’ve experienced it—that joy,” she pointed out. “I hope that the film would not only expand the biking community, but also help them unite, so that they will have a louder voice to fight for better road policies,” she said.

“Biking can be such a simple solution to many problems, from traffic to climate change,” Marfil said. “But our government should come up with the right infrastructure and policies to promote biking—like in Japan and the Netherlands.”

Moreover, biking is not only a way to keep fit, “it’s also good for the soul,” she asserted.

“It can be such a soulful activity. It makes you more grounded, compared to commuting. In an air-conditioned car, you are insulated from the things happening around you. But on a bike, you are more in touch with the city. When you’re biking in the mountains, you can become one with nature.”

Marfil stumbled on the idea for her latest film (which opens Feb. 3), while accompanying her son to his biking lessons at the La Mesa Eco Park seven years ago. 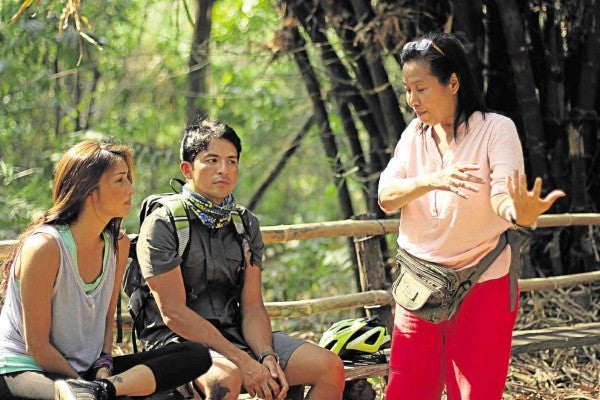 She felt “enchanted” in this verdant forest just a few minutes away from the bustling city. “I met a forester, a longtime volunteer at the park,” she recalled. “He explained to me why forests are important, why cutting down carbon emission was crucial, why the bicycle is more sustainable than other vehicles.”

It was an eye-opening encounter for Marfil, who is known for directing films that pursue advocacies, from the struggle for gender equality (“Mga Pusang Gala”) to the fight against child abuse (“Boses”). “I usually choose subjects that affect me,” she said.

Apart from her “gorgeous” cast (led by Solenn Heussaff, Dennis Trillo and Kit Thompson), there’s another “star” in the movie: “Mother Nature,” she quipped. “The places where we shot were to die for (La Mesa Eco Park, San Mateo, Benguet, Mount Maranat)… The minimum goal is to entice people to experience the great outdoors. I want people to go out and fall in love with nature again.”