‘Scandal’ actress feted with parade and roast at Harvard 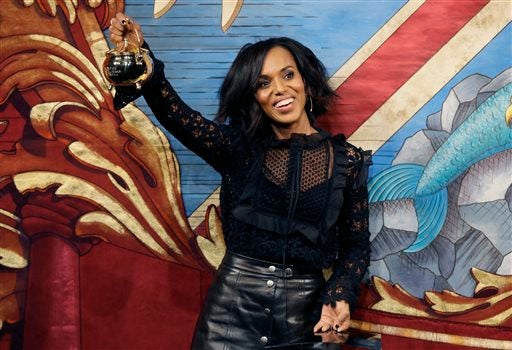 The nation’s oldest collegiate theatrical organization says it named Washington as Woman of the Year because she’s the first black woman to headline a network TV drama since 1974.

In a statement, the troupe called her a “talented and socially engaged film, TV and stage actress who keeps breaking barriers in Hollywood.”

Washington told WCVB-TV before the festivities kicked off that she was “crazy honored” to join the esteemed list of women that have been honored by the group.

The 38-year-old actress also admitted she was nervous about the roast, which was her first.

In keeping with tradition, Washington made her way to the theater in style, riding in the back of convertible flanked by actors in colorful drag.

While on stage with Hasty Pudding actors, Washington did a throaty rendition of Tina Turner’s “What’s Love Got to Do with It.”

At another point, she threw a pie at an actor dressed like Donald Trump and she later posed with the event’s signature golden pudding pot.

Actor Joseph Gordon-Levitt, this year’s Man of the Year, will be feted by Hasty Pudding on Feb. 5.