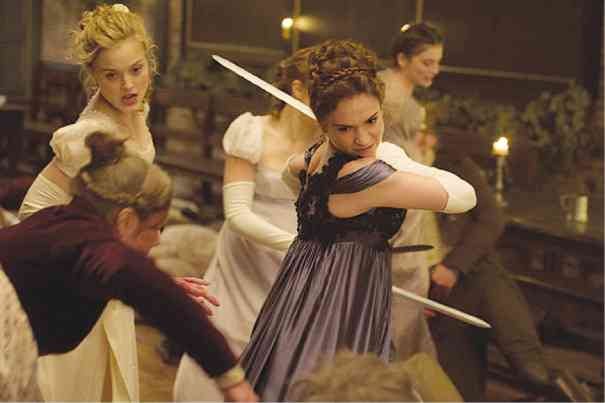 LILY James (right) and Bella Heathcote in “Pride and Prejudice and Zombies.”

It’s quite an interesting time for Lily James, who stars in “Pride and Prejudice and Zombies,” a parody of the classic British novel that finds Jane Austen’s heroine as a gun-toting woman who teams up with Mr. Darcy to rid 19th century England of the undead menace.

The actress who made many moviegoers fall in love with Cinderella all over again explained in our recent chat how she got involved with the zombie project. “I was very intrigued and somewhat bemused when I saw the title come up in my (e-mail) inbox, ‘Pride and Prejudice and Zombies,’” recounted the English actress. “I thought, this sounds terrible! Then, I found out about the book that Seth Grahame-Smith wrote, which was a bestseller.

“It was an interesting idea to mix those two genres and see what impact that would have on the character of Liz Bennet, because she’s such a remarkable young woman.”

The 26-year-old, whose mother (Ninette V. A.) and American grandmother Helen Horton were actresses, admitted, “I wasn’t a huge zombie fan before, although I loved ‘Shaun of the Dead.’”

She reveled in the chance to portray Austen’s romantic heroine and her sisters as corset-wearing yet martial arts-trained warriors. “I completely found myself in Ms Bennett,” Lily said. “She’s such a forward-thinking, strong character in the original. Then, in this movie, to have the chance to be so physical and actually fight, it felt like this external expression of how she is, her conflict inside and her frustration. And it just came out in actually beating up Darcy.

“It’s been amazing for me to play both Cinderella and Liz Bennett. Cinderella is very strong from within—a peaceful strength. Whereas Liz Bennett is so like, on the tips of her fingers. She’s a real fighter! I loved both. I would really enjoy to keep going down that path of this truly much stronger woman than Cinderella.”

“I think they’re scary because you can’t get rid of them, unless you shoot them twice in the brain,” Lily commented about zombies, which continue to fascinate people who make “The Walking Dead,” countless movies and books (about them) popular. “All these zombie rules. And the fans, you have to be so specific. With this genre, you have to get your geek fan stuff right!”

Adding to Lily’s fun in making this movie is that Matt Smith, who plays Mr. Collins, is her boyfriend. She said that she and Matt, who was the Eleventh Doctor in the long-running BBC series “Doctor Who,” knew each other before this project came along.

“It’s great,” Lily said of working with her boyfriend. “He’s very funny in the film—and we have a lot of funny scenes! It was lighthearted, because his character’s so funny. And we didn’t have to do intense scenes. It might be different based on what material you’re working on. But I was in every day on this. He came in—and he was just brilliant! He had us all in fits of laughter.”

As for working with Burr Steers, who made his impressive directing debut with the 2002 indie drama, “Igby Goes Down,” Lily answered, “I had no idea why he would do ‘Pride and Prejudice and Zombies,’ but it turned out to be a perfect match! He’s fun. He creates a very relaxed atmosphere on set. 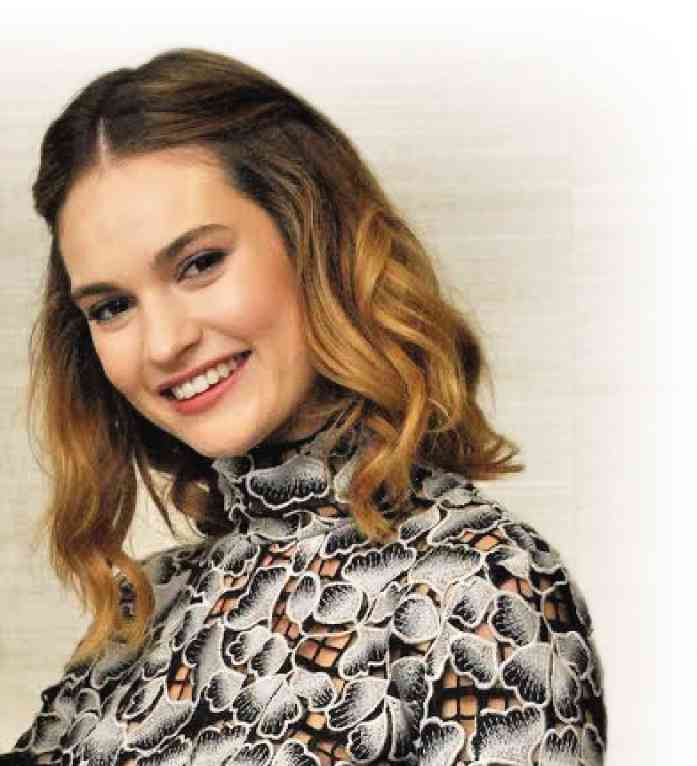 “That’s not always the case. Sometimes, you’re working and acting—you feel quite tense and nervous, and the pressure’s piled on. With him, it was a  joyous set. So, that helped set the tone for the movie. It felt lighthearted and fun, which the film has—or else, what’s the point?”

“I’m very proud (of it),” Lily said of this nth adaptation of Leo Tolstoy’s epic novel, shot in Russia, Lithuania and Latvia. “I loved the director (Tom Harper)—how he shot it with a lot of movement. It feels quite different from other period dramas. So that makes me feel that even though it was of the same genre, it felt quite a different work for me.

“I loved shooting it! We were in the most amazing places. We filmed in Catherine’s Palace and outside the Winter Palace in the snow, with sleds. It was beautiful.”

With all the breaks coming her way, Lily is grateful to one show. “‘Downton Abbey’ is totally responsible for how my career has gone. The show made me! I don’t think I would have gotten Cinderella if I hadn’t had been in ‘Downton.’”

Lily shared that she also loves to sing. She made her film singing debut in “Cinderella”—as the end credits roll, that’s her crooning “A Dream is a Wish Your Heart Makes.” “Maybe I would do more singing,” she volunteered.

Despite her busy schedule, she managed to find time for a short break. “I went on a holiday last Christmas. I went to India, which was amazing! I went for a week. I went to Goa and had a lovely time. We were with Doug Booth, who’s also in ‘Pride and Prejudice and…’ We—the cast of this movie—are all good friends.”

It was a welcome respite because she’ll soon be back on the set in Edgar Wright’s “Baby Driver.” “I’m having Southern American speech lessons at the moment. I’m playing an American for the first time. The script is brilliant. Edgar Wright is a genius. He’s unique. He’s very specific—and he’s involved in every aspect of his work: the costumes, style… everything. He’s a real auteur.

“The cast is insane, with Jamie Foxx, Jon Hamm, Kevin Spacey and Ansel Elgort. It feels like a big step for me in a  different film from anything I’ve done.”

Something else is different in the role. “I had a costume fitting the night before last, for ‘Baby Driver.’ There’s no corset. I am a 26-year-old American girl. It was weird getting to wear my own jewelry and having my hair messy. And not having to consider what being in a period piece [would be like]—wearing a corset and what wearing those costumes does to how you stand and how you talk to the family. So, it was refreshing—and I’m excited.

But she said that she has actually gotten used to wearing corsets. “I don’t find them  uncomfortable anymore. I’m so used to them. And it does help with the character; it really does.”

Just three days after wrapping up “Baby Driver,” Lily [is set to] tackle another exciting project. She will make her West End debut as Shakespeare’s tragic heroine in “Romeo and Juliet,” which will reunite her with her “Cinderella” costars, Richard Madden (Romeo) and Derek Jacobi (Mercutio) and that hit movie’s director, Kenneth Branagh.