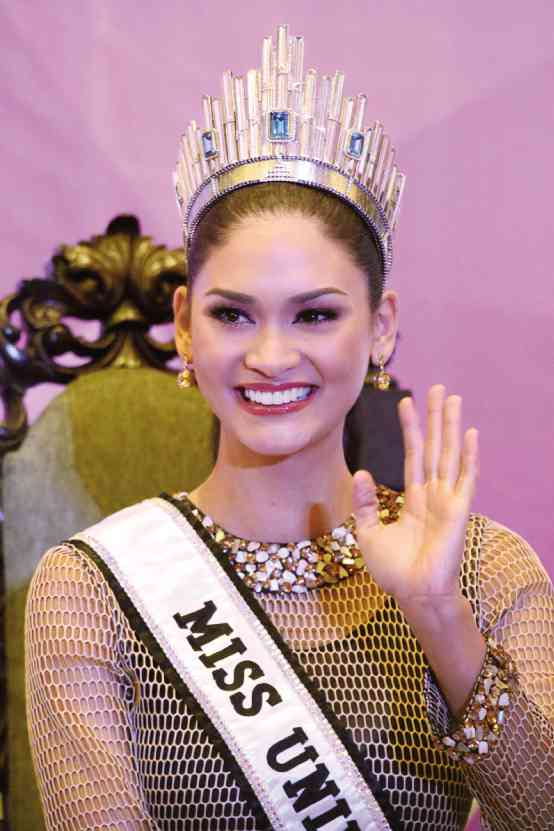 In a closed-door interview with select media scribes after her grand press conference at the Novotel Manila in Quezon City last Sunday, Pia said she hopes to take advantage of her expanding reach as Miss Universe to advance her causes.

One social issue Pia said she hopes to be more involved in is the fight against cyberbullying, being “a victim” herself.

She recalled that even before the Miss Universe brouhaha, she had been bashed in social media for winning the Bb. Pilipinas-Universe crown, because she was “not a full Filipino”—her father is German—and for being “fat.”

“I’m trying to learn how I [as Miss Universe] can work on it (cyberbullying), because it’s quite new. The mere fact that I’m talking about it is work on its own,” Pia maintained.

“There are many fans who flood those who make negative comments about me. Yes, these people are cyberbullying me, but it’s also cyberbullying when you fight back,” she added. “I try to be a good example by constantly reminding people not to bash—or get back at critics. You don’t have to fight back all the time.”

Pia appealed to her fans. “Let it go. Don’t say bad things anymore. That is not right, and it gives us a negative image to others.”

Pia assumed the 2015 Miss Universe title just as a new team, WME/IMG, was taking  over the ownership of the pageant’s organization, which also runs the Miss USA and Miss Teen USA beauty tilts.

Under new management, Pia said “the only thing that I noticed with Miss Universe is we’re now more active in social media. And I think a lot of people noticed that.”

She told Inquirer Entertainment: “It’s great, because people can see what it’s like to be Miss Universe—and they also feel like they’re part of the journey!”

Another cause Pia is interested in advancing is disaster relief, which is at the heart of the pageant’s charity partner, Cordaid Fund.

“It reminded me why I love my job. I can’t wait to meet with [Cordaid] and plan where I can be involved,” she said.

The Filipino-German titleholder also said she plans to promote Filipino fashion during her reign. She reported that she received the “thumbs up” from the Miss Universe Organization (MUO) when she showed Filipino-designed clothes that she hoped to wear in her public appearances.

“In my interviews this morning, I wore Bessie Besana. I had Francis Libiran in my room a few hours ago, and we were looking at the wardrobe I can bring with me to Miss Universe. Cheetah Rivera also shared beautiful clothes I can’t wait to wear,” Pia said.

The global pageant hung in limbo in 2015 following former owner Donald Trump’s controversial racist statements made in his bid to become the Republican’s presidential bet for the US elections this year, suffering a backlash from the pageant-crazy Latin communities.

Trump, who used to own half of the MUO, then later bought the other half of the stake from network partner NBC in the middle of the year. He eventually sold the entire MUO to modeling and entertainment firm WME/IMG before the end of the year.

Pia is scheduled to attend this Saturday’s wedding of Vic Sotto to her best friend, Pauleen Luna, before flying back to the United States to take part in “Inside Edition’s” coverage of a major sporting event—the 2016 Super Bowl.