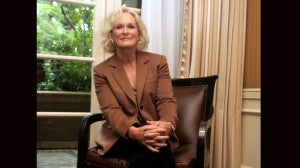 Glenn Close hopes that by talking openly about her sister, Jessie Close, being bipolar, and Jessie’s son, Calen Pick, stricken with schizo-affective disorder, the stigma associated with mental illness will be eradicated. Photo by Ruben V. Nepales

LOS ANGELES – A history of mental illness in Glenn Close’s family has motivated her to create a non-profit organization to help raise awareness of the issue and provide support for affected families.

The winner of Tony, Emmy and Golden Globe Best Actress awards and recipient of several Academy nods turns in yet another nomination-worthy performance in Rodrigo Garcia’s “Albert Nobbs,” where she portrays the title character, a poor woman in 19th century Ireland who passes herself as a man in order to get a job as a waiter in a hotel. As she continues to disguise herself, Albert Nobbs becomes confused about her identity.

Speaking with light in her eyes that reflect the passion of the artist and the individual in her, Glenn recalled how she herself knocked on doors to ask companies and executives to finance “Albert Nobbs,” which she co-wrote and co-produced.

She talked for the first time about co-founding BringChange2Mind to help raise awareness about mental illness, and to support the mentally ill and their families. Glenn hopes that by talking openly about her sister, Jessie Close, being bipolar, and Jessie’s son, Calen Pick, stricken with schizo-affective disorder, the stigma associated with mental illness will be eradicated. Excerpts of our chat:

Albert Nobbs lost her identity. Have you ever felt that you lost your identity, and how did you find yourself again?

That’s a very loaded question for me. That’s a book or another movie, because my parents were in a cult-like group from when I was 7 to 22. I left it in order to go to college. In that kind of culture, everybody is supposed to say the same things and act in the same way. It’s devastating for a child, because at a time when you’re trying to figure out who you are, you’re told who you’re supposed to be. I survived that.

But, when I was finally able to break away and go to college, I didn’t trust any of my instincts, because I thought they had all been dictated to me. So, it was like starting with a clean slate. I walked straight into the theater department and became somebody else (laughing).

Which non-profit organization do you support?

BringChange2Mind, which is the organization I co-founded to help eliminate the stigma – you can also call it discrimination – about mental illness. It’s the issue I feel most passionate about.

How did you get involved in raising awareness about mental illness?

I’ve learned that one out of four people is affected by mental illness in some way, so it’s part of the human condition.

The bottom line for me is to be able to talk about it freely, because I know that so many of us are touched by it. To me, it’s the last frontier of stigma.

What has marriage taught you?

With the passage of time, you hopefully learn more about each other. I’m married to a very strong and interesting man. He’s in bio tech, so he speaks a totally different language. It has been a journey finding a common language, which I find very exciting.

How is your daughter?

She graduated from college last year. She’s in New York, hoping to become an actress.

Can you talk about equality in Hollywood?

Men still make more money than women in our profession unless they are huge stars, like Julia Roberts when she was a big star, and Angelina Jolie. I was recently at the Fortune Most Powerful Women Summit. That was wonderful, because I was in a room full of incredibly powerful women. I was the only actress there (laughing). I was very honored to be there, but it has been a long journey for women. I think women in power will always be problematic for men.

Have you learned over the years how to get what you want?

I’m a fighter. I don’t give up. When I first started in theater and went to auditions, it was okay for me if I felt I had done the best to my ability.

I didn’t mind if I didn’t get hired or not. But, if I went in and, for some reason, I felt I didn’t show them my best, I would always try for a second chance. I wasn’t willing to let that go by and have people think that was my ability. Sometimes, if I got that second chance, I got the job.

Can you talk about that in the context of your struggle to find financing for “Albert Nobbs”?

Going into office after office with independent film companies that have since long gone, I never gave up! I didn’t resent the fact that they didn’t give me money. But, it was amazing how little talent and track record mattered.

You co-wrote the song that’s played in the end credits. Was it your first time to write a song?

No. I’m actually a member of ASCAP (American Society of Composers, Authors and Publishers). I wrote songs when I was just out of high school. Nothing I will repeat for you, though (laughing).

No retirement for you yet?

It depends on what people ask me to do. I’m not going to do something that’s not worth leaving my husband for.

Read Next
Down with doom and gloom
EDITORS' PICK
Honolulu Café is the cure for your Egg Tarts and Roastings cravings
House energy committee chair Arroyo bats for cheap electricity
PH detects local transmission of Omicron subvariant BA.2.12.1
Congress canvassing of votes for president, VP to begin May 24
Petition to reverse Comelec decision on Bongbong Marcos’ DQ case reaches SC
Luxe property: A way to build, preserve wealth
MOST READ
Heart Evangelista gets a ‘no’ from Chiz Escudero after asking, ‘Do I deserve a bag?’
CebuPac places pilot under disciplinary review after ‘baseless’ post vs Robredo
Closure order vs Megaworld Corp halted as firm vows cooperation with BIR – exec
Duterte OKs law extending validity of registration, license to carry firearm
Don't miss out on the latest news and information.