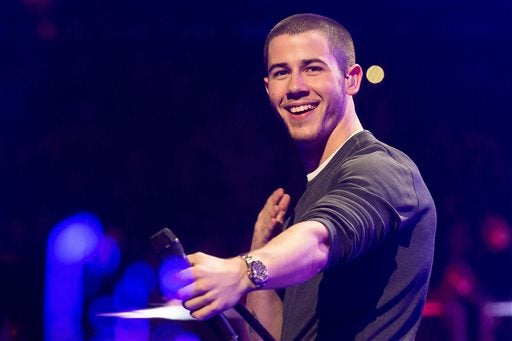 In this Dec. 11, 2015 file photo, Nick Jonas performs at Z100’s iHeartRadio Jingle Ball 2015 at Madison Square Garden in New York. Jonas will make his first appearance, performing at this years New Orleans Jazz and Heritage Festival at the Fair Grounds on the weekends of April 22-24 and April 28-May 1. AP FILE PHOTO

NEW ORLEANS— Stevie Wonder, Pearl Jam and Neil Young are among those returning to entertain fans at this year’s New Orleans Jazz and Heritage Festival, while Nick Jonas, Maxwell, Beck, Snoop Dogg and the Red Hot Chili Peppers are making their festival debut.

Festival organizer Quint Davis said Tuesday those artists are just the tip of the iceberg for music fans awaiting the festival, which showcases and celebrates traditional and contemporary American music. Davis unveiled the list of artists scheduled for the 2016 event, to be held at the Fair Grounds on the weekends of April 22-24 and April 28-May 1.

“It’s blues, gospel, R&B, rock and jazz in all its forms, Cajun, zydeco and more. It’s who we are as a city and as a people and that’s our festival,” Davis said in an interview.

Wonder last played the Jazz Fest in 2008, while Young performed in 2009. Pearl Jam’s previous appearance was in 2010.

Davis said the lineup has a wider range of artistic depth and variety than is typically available at most other festivals.

“We’ve grown to having at least one of the greatest artists in the world in those genres on every stage, every day. It used to be, we’d have maybe one on every weekend,” he said. “We know over the last number of years since Katrina that we have set the bar for talent really high and that bar gets higher every year. Our challenge is to make sure next year is even better.”