Tom Jones performs at the Big Dome this April 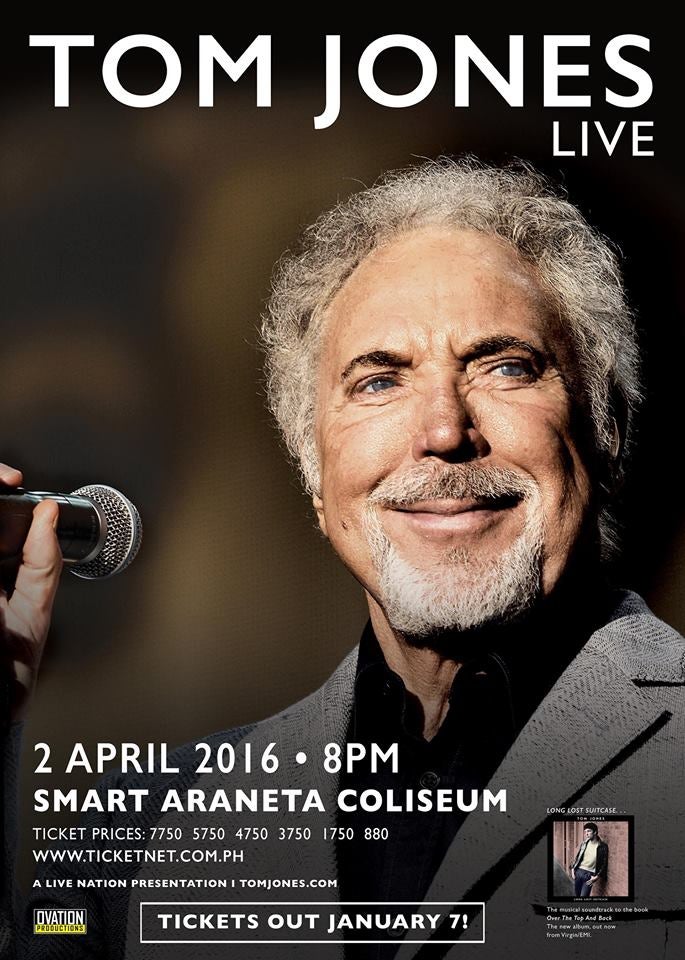 The powerful vocals behind “It’s Not Unusual,” “Help Yourself,” “Delilah” and many other hits will sweep the concert scene when singer Tom Jones hits Manila for a live performance on April 2, 2016 at the Smart Araneta Coliseum in Cubao, Quezon City..

Live Nation and Ovation Productions are bringing to Manila one of the most enduring personalities in the music entertainment industry whose unique vocal power, talent and charisma have endeared him to hundreds of millions of music lovers all over the world.

Titled “Tom Jones Live in Manila,” the event will showcase an exciting spectrum of genres ranging from pop to rock and country to rhythm and blues through a breathtaking array of songs made famous by one of the best-selling male singers and artists of all time during a successful musical and entertainment career spanning more than 40 years.

It will spotlight the outstanding talent and brilliance of a musician who, at 75, still exudes an enduring appeal and charm as he awes audiences with his perfect-pitch voice that can effortlessly shift from baritone to tenor.

The Welsh singer continues to add more accomplishments to his roster. In September, 2015, he announced the release of his new album, “Long Lost Suitcase.” This followed his previous albums, “Praise & Blame” (2010) and “Spirit InThe Room” (2012), for which he received some of the best reviews of his career.

The new album’s track titles are meshed into the chapters of his autobiography, “Over The Top And Back,” which was released at the same time. Tom Jones’ other hugely popular hits are: “Green Green Grass of Home”, “What’s New Pussycat?”, “Love Me Tonight”, “I Who Have Nothing”, “Kiss”, and “Sex Bomb”, among many others.

Today Tom Jones continues to enjoy a consistent international touring schedule. He has managed to grow and sustain his career like few others in the pop music industry. His unique voice is recognized worldwide and his live shows continue to draw multitudes wherever he performs.

(“Tom Jones Live In Manila 2016” is presented by Live Nation and Ovation Productions. Tickets are available at regular TicketNet outlets and online at www.ticketnet.com.ph. For more info, call 532-8883)