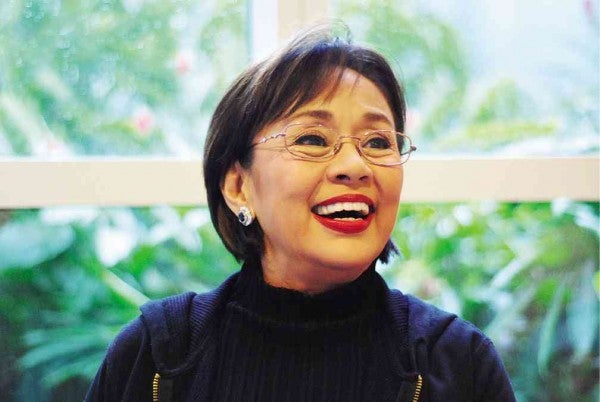 SANTOS. Would have loved to play Nora Aunor’s sister in “Larawan.”

VILMA SANTOS likes challenging herself with roles she can sink her teeth into—like the Miranda Priestly-channeling, cancer-stricken career woman she portrays in Joyce Bernal’s upcoming screen dramedy, “Everything About Her” (opens on Jan. 27).

If the film’s buzzed-about trailer, with its fascinating combination of situational comedy and medical drama, is a reflection of how entertaining the film would be, it looks like Ate Vi’s avid supporters are in for a treat!

But, there’s one role that would have been perfect for the Star for All Seasons to essay—as one of the Marasigan sisters, Candida and Paula, in “Larawan,” based on Nick Joaquin’s end-of-an-era play, “A Portrait of an Artist as Filipino”—this, we learned last December from Vilma’s similarly iconic rival, Nora Aunor! Can you imagine the thespic fireworks they’d set off if that project ever came to pass?

A few days after we visited Ate Guy on the set of “Little Nanay,” we talked to Ate Vi and asked her about that dream project. —A stage play for Vilma Santos? “Yes, why not? It’s true—it was offered to me,” she confirmed. “You see, as you get older, you seek for more meaning in the things that you do. But, while it was something that presented an exciting challenge for me, the timing of the offer wasn’t good—I was already mayor of Lipa at the time.

“When I asked about rehearsals, it became clear that it was something I couldn’t fully commit to, because it needed to be rehearsed daily. If I have a hard time shooting a film on days when I’m not working as a public servant, what more a play?”

For the fans of Tinseltown’s most durable Movie Queens, hope springs eternal, however. After all, the Vilma and Nora pairings weren’t as rare as we thought they were—and who knows, it just might happen again.

Vilma recalls, “We did four or five movies together. If I recall correctly, aside from ‘Young Love,’ meron ding dinirek si Kuya Germs (German Moreno) costarring Tirso Cruz III and Edgar Mortiz (‘Guy & Pip and Vi & Bot’), another one with Bobby (Romeo Vasquez), then “T-Bird at Ako’ and “Ikaw ay Akin.’”

While it’s true that Vilma is yearning for more acting projects (“You can’t take it away from me—I grew up in show biz, at naiinggit ako when I watch movies and TV dramas”), she says she chooses obligation over ambition. She explained, “You have to know your priorities—because people’s lives are on the line!”

In what ways are women more effective than men as leaders? Vilma replied, “Based on my 18-year experience in politics, I like the decisiveness of male politicians. But, women are sometimes more effective because we’re more nurturing. We have that ‘soft touch,’ because that’s how we run our homes—which makes us more sensitive to the needs of others!”