We finally got our notice … | Inquirer Entertainment
Close
menu
search

We finally got our notice … 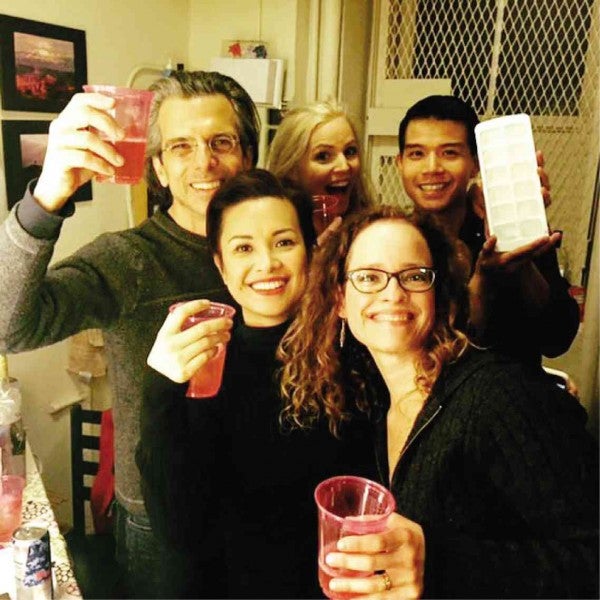 NEW YORK—These are the words that make every cast member, musician, wardrobe, hair, makeup and backstage crew personnel feel sick to their stomach: “We got our notice.”

This means that the show we’re all working on as a team has been given notification that it shall be closing. And … well … we got ours.

A show getting its closing notice can mean anything from closing the day after opening night, to having more than a few weeks to properly pack up and say our goodbyes. “Allegiance” was fortunate: We got our notice on Jan. 8 (Wednesday) that our closing performance will be on Valentine’s Day, Feb. 14. That gives us nearly six weeks to put our affairs in order.

Following the matinee performance on Jan. 8, our production stage manager Peter Wolf told the actors to get out of their wigs and costumes, then summoned them to the stage, along with the musicians, hair and wardrobe people, and the crew. A few of our producers were already there, plus our director Stafford Arima, music supervisor Lynne Shankel and composer/lyricist Jay Kuo and his co-librettists, Marc Acito and Lorenzo Thione (who’s also our lead producer). We were all trading looks, knowing too well why we were standing here.

Once we were complete, Lorenzo proceeded to speak. With tears in his eyes—he informed us of the inevitable. Jay was crying, too. Actually, many of us assembled already were very emotional that our Broadway run in this show that is so close to our hearts will be ending soon.

After all had been said, one of our cast members turned to our newest addition, Shea Renne (who made her Broadway debut in the ensemble just last Tuesday, replacing Catherine Ricafort, who’s now in rehearsal for a new musical titled “Disaster!”), and said with a grin, “Well, now you get the full Broadway experience.”

Once the announcements were done and hugs generously shared, a bunch of us headed upstairs to leading man Telly Leung’s dressing room for a tradition we have dubbed “Bar Telly,” which is having a drink after the last show of the week.

However, because of the day’s events, we opted to have Bar Telly on that Wednesday night. There was champagne, vodka and whiskey on hand for everyone who came over. I had a couple of drinks and sat on the stairs outside Telly’s room, and chatted with cast members, sharing our thoughts on the show’s imminent end.

To be completely honest, I was sad, angry and disenchanted. No performer on Broadway ever likes their show getting its notice. This is not anything new for many of us, but it never gets easier. If there’s any consolation, however, it’s that many beautiful shows share our fate, and those written by veterans of the business, such as Rodgers and Hammerstein (“The King and I,” “Oklahoma,” “Flower Drum Song”), Boublil and Schönberg (“Les Miz,” “Miss Saigon”), Kander and Ebb (“Chicago,” “Cabaret,” “The Scottsboro Boys”) and Jason Robert Brown (“The Last 5 Years,”  “13,” “The Bridges of Madison County”).

By the way, the shows I listed in parentheses are not just massive hits and award winners, but also include shows that couldn’t find an audience. My point: It happens even to the best of them!

Stafford said it best, though, on a Facebook post containing a quote by Dr. Seuss: “Don’t cry because it’s over, smile because it happened.” And truly, after experiencing the sting of the announcement (and eating my feelings in the form of a plate of macaroni and cheese), this is what I am choosing:

I am electing to feel happy, privileged and proud that a story based on a dark part of the American story, one that is important to share with as many people as we can, has actually made it to the Broadway stage.

By the time we close, we will have been seen by approximately 120,000 audience members—the same number of people who were incarcerated in those 10 Japanese-American internment camps.

So, for the next four weeks, we will soldier on for the audiences that will come to see us. We have been able to perform for quite a few illustrious people in the course of our run: astrophysicist and “Cosmos” host Neil deGrasse-Tyson, “Everybody Loves Raymond” actress Doris Roberts, “Glee” actress Jenna Ushkowitz, renowned feminist Gloria Steinem, composer John Kander, Miss Universe 2015 Pia Alonzo Wurtzbach, “Orange Is the New Black” actress Uzo Aduba, cabaret artist Michael Feinstein, actress Nichelle Nichols, “In the Heights” and “Hamilton” creative force Lin-Manuel Miranda, newest star of “Kinky Boots” Wayne Brady, former

’N Sync member Lance Bass, and many more actors, singers, dancers, cast members of other musicals currently running, musicians, students and US congressmen and senators. There are many more audiences with whom to share our story, and we will do that as committed and focused as always.

As a cast member of this show, I got to see some amazing things: George Takei making his Broadway debut at the age of 78, alongside many other Asian-American actor/singer/dancers making theirs; Telly Leung finally stepping into the shoes of a leading man; recording our cast album, preserving the show’s music forever; and the creation of a show that tells this very American story from the Asian-American perspective that puts on the forefront Asian-American characters that are not stereotypes (i.e., prostitutes, concubines, hustlers, pimps, gang members, criminals, etc.).

These are real people: heroic, imperfect, temperamental, fun and funny, emotional, hopeful, stern, loving, sexy, political, patriotic. These are Americans on that stage, each one a fully fleshed-out human being.

I am thankful that I am part of this show’s journey, to Jay and Lorenzo for asking me to join them on this adventure, and to every audience member who gave us a fair shot. Until Feb. 14, our byword will be Gaman. We will hold our heads high, endure—and carry on!