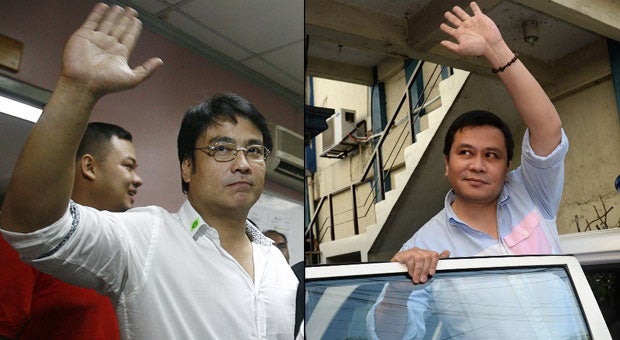 DETAINED Senators Bong Revilla and Jinggoy Estrada Monday asked the Sandiganbayan to allow them to attend the wake of the late television host and veteran actor German “Kuya Germs” Moreno in Quezon City.

Revilla and Estrada, both scions of prominent show biz and political clans, are currently locked up at Camp Crame for their alleged participation in the P10-billion pork barrel racket.

Moreno, a TV host-comedian and talent manager, succumbed to cardiac arrest on Jan. 8, almost a year after he suffered a mild stroke.   Interment is tentatively set for Thursday, Jan. 14.

In a two-page urgent motion, Estrada asked the antigraft court’s Fifth Division for a three-hour furlough to visit Moreno’s wake at Mt. Carmel Church from 7 p.m. to 10 p.m. today (Tuesday).

He vowed to comply with the conditions that the court would set regarding the security arrangement for his out-of-prison travel.

“As part of the movie industry and public servant, accused-movant was especially close and would like to pay his final respects to the late German Moreno…,” Estrada’s motion read.

“Visiting and attending the wake is one of a person’s Christian and Catholic obligations, most especially to the accused-movant to the remains of German Moreno, who was and had been a part of the movie industry,” it added.

In a similar petition, Revilla told the court’s First Division that he was “deeply saddened and dejected” upon learning of Moreno’s passing and that it was his “obligation to personally pay his last respects to the man whom he and his family owe much.”

Revilla said Moreno, who stood as their wedding godfather, “helped, guided and cared” for him and his wife, Cavite Rep. Lani Mercado, and regularly visited him after the court ordered his arrest in June 2014.

In fact, he said Moreno paid him a visit at his detention cell last Christmas “despite his failing health.”

“Senator Revilla comes before this honorable court, humbly seeking for (its) compassion and understanding to allow him… to visit and spend a few moments to pay his last respects to Mr. Moreno,” Revilla’s motion said.

He noted that the court had previously ruled that “under similar exceptional circumstances… the court will not hesitate to grant any motion that may be filed by accused Revilla” when it allowed him to visit his son, Cavite Vice Gov. Jolo Revilla, and his father, former Sen. Ramon Revilla Sr., when they were hospitalized in separate occasions last year.