Ai-Ai casts doubt on claims that 'Beauty and the Bestie' is No. 1 | Inquirer Entertainment
Close
menu
search

Ai-Ai casts doubt on claims that ‘Beauty and the Bestie’ is No. 1 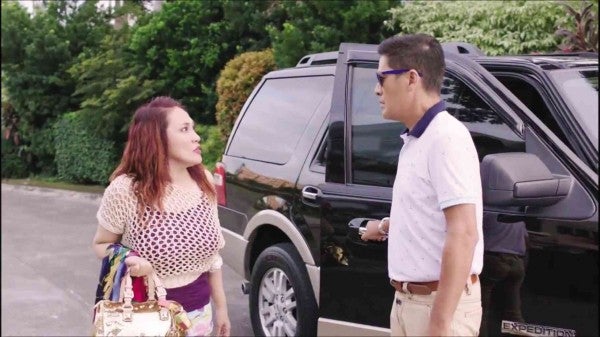 AI-AI delas Alas and Vic Sotto in ‘My Bebe Love’

‘Kahit ‘yung No. 3, pwede ring sabihin na No. 1 din sila e (Even the No. 3 topgrosser can also claim it’s No.1,’ Delas Alas said on Monday evening (Tuesday in Manila) at a press conference announcing the screening of ‘My Bebe Love’ in 15 cities in California and Texas starting on Jan. 8.

‘In our hearts, sa puso ng AlDub nation, sa puso ng sambayanang Pilipino, No.1 kami, kasi lahat ng ginagawa namin, walang daya (we’re No.1 because we don’t cheat in everything we do).’

‘Ayaw ni Lord ng nandadaya (The Lord doesn’t like cheaters). Karma is a bitch,’ she added, eliciting laughs from the crowd.

Delas Alas was also in town to visit two of her children, who live in Los Angeles.

A Star Cinema spokesperson has claimed that its MMFF entry, ‘Beauty and the Bestie,’ snagged the top spot as the festival entered its second week.

Comedian Vice Ganda, who costars with Coco Martin in the movie, tweeted: ‘300 million. Thanks to you, Madlang People, for making us number 1 in your hearts!’

Delas Alas, Vic Sotto and the love team of Alden Richards and Maine ‘Yaya Dub’ Mendoza (more popularly known as AlDub) lead the cast of ‘My Bebe Love.’ The movie was No. 1 on
opening day, grossing a record-breaking P60.5 million.

Delas Alas made the statement in the wake of reports of ticket-swapping that could affect numbers that determine box-office ranking.

The actress said people very close to her had personally witnessed ticket swapping.

‘My Bebe Love’ director Joey Javier Reyes was the first to publicly confirm reports that tickets for the movie were swapped with tickets for ‘Beauty and the Bestie.’

‘Got word from producer: It is true. Make sure that the title of the movie on your ticket is what you want to watch. Beware of ticket swapping,’ Reyes tweeted recently.

‘My Bebe Love’ nearly reached the P300-million mark on Jan. 2, according to GMA Films president Annette Gozon-Abrogar. The movie was produced by APT Entertainment, a subsidiary of Television And Production Exponents (TAPE) Philippines Inc., a partner of GMA Network.

‘Beauty and the Bestie’ was produced by Star Cinema, which is under GMA’s rival network, ABS-CBN.

In Southern California, ‘My Bebe Love’ will be shown at the Southbay Pavillion 13 in Carson, Orange Stadium Promenade 25 in Orange, and River Park 15 in Oxnard, according to Jemilynne Aguirre of SG Productions, one of the local event producers.

Star Cinema’s side
Meanwhile, Star Cinema, producer of the action-comedy film, ‘Beauty and the Bestie,’ said it would rather not react on the issue of alleged ticket swapping because ‘this has already been addressed by the Metro Manila Development Authority.’ The MMDA is the organizer of the annual festival.

Star Cinema Ad Prom official Roxy Liquigan said the film production company has been joining the Metro Manila Film Festival (MMFF) for many years, ‘but it was never us that manned the movie houses. This was never an issue in the past years. I think it’s all hearsay.’

In a text message sent to the Inquirer, MMDA chair Emerson Carlos said the agency has conducted an inquiry on the matter after the issue first came out last week. ‘[We] immediately issued a statement that there was no sufficient proof nor convincing motive for (the issue’s) existence,’ said Carlos. ‘We also admonished the public to be more responsible in publishing statements.’

The Inquirer sought the reaction of Star Cinema on the recent controversial statement of Ai-Ai, the star of ‘My Bebe Love: #KiligPaMore.’

Delas Alas said she refused to believe the pronouncement of ‘Beauty and the Bestie’ lead actor Vice Ganda that the film has beaten ‘My Bebe Love’ in the box-office ranking. Delas Alas said this was because their film’s producer, M-Zet Films, does not resort to cheating.

Liquigan shot back: ‘We have had several film entries in the past years, including the ‘Tanging Ina’ series, and this had never become an issue. I guess this is just a result of fans’ eager reaction.’ Delas Alas is the lead actress of the ‘Tanging Ina’ franchise.

On Friday, the MMDA announced that the 14-day gross of this year’s festival amounted to P1.02 billion as compared to the gross of P985 million In 2014.

Carlos also released the top four films among the festival’s eight entries. ‘In no particular order,’ the MMDA chief enumerated the movies as follows: ‘Haunted Mansion,’ ‘My Bebe Love: #KiligPaMore,’ ‘Beauty and the Bestie’ and ‘#WalangForever.’

Asked for the agency’s reason for not providing the ranking this year, Carlos said that MMFF organizers ‘do not really release the official breakdown.’ He added that those that were published in the previous years might have come from other outfits.

Liquigan said ‘Beauty and the Bestie’ has reached P419.3 million as of Jan. 7. ‘Vice is set to break the record of his previous movie, ‘Praybeyt Benjamin,’ which earned P443 million,’ Liquigan pointed out. ‘We won’t lie about our gross result. We’re just very happy for Vice!’

He added: ‘I personally don’t think it’s possible to cheat. People should be able to tell ticket sellers what movie they want to see. The fact that they were able to get inside the theater of their desired film disproves this claim. I’m thinking that everyone is just high with emotions.’

Liquigan said it was possible that the group supporting ‘My Bebe Love’ reacted negatively ‘because they also wanted to break their own record.’
He added: ‘As for our film, it will be shown worldwide starting next week. It will be seen in 36 theaters in North America and soon in Europe.’