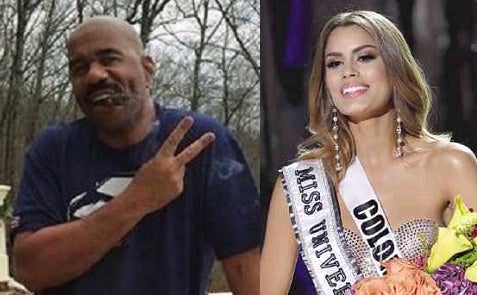 Entertainment Tonight has reported that host Steve Harvey (left) and Miss Universe First Runner up Ariadna Gutierrez of Colombia would be finally meeting after a mix up on coronation night. INQUIRER.NET WIRES

Miss Colombia Ariadna Gutierrez is set to face comedian and Miss Universe 2015 host Steve Harvey on a show which would air during the week of January 18th, Entertainment Tonight (ET) has reported.

The 22-year-old Gutierrez would appear on “The Steve Harvey Show,” ET said on its website.

The interview will be the first time that Gutierrez and Harvey will meet personally after the infamous announcement mix-up which has since been the source of various comedy skits, memes, and parodies.

Gutierrez had to give up the Miss Universe crown after it was erroneously given to her by Harvey who misread the cue card. The crown was then given to true winner, Pia Wurtzbach of the Philippines.

In an earlier episode of his eponymous radio show, Harvey said that he had tried to reach out to Gutierrez but failed to get a response.

“Now, have I tried? Yes, but have gotten not a response,” he admitted in an episode last January 4.

Gutierrez has cried foul on the incident, saying that it was a “great injustice” for her. AJH