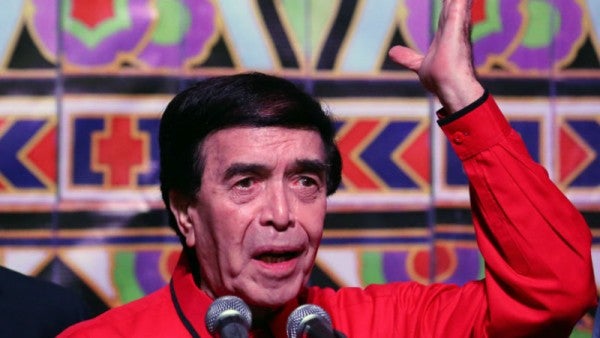 For generations of show biz stars, German Moreno, one of the industry’s first multihyphenates (he was a TV and radio host-actor-manager before multitasking became in vogue), was more than a mentor, he was a dear friend, a constant and abiding presence in their lives—in front of and behind the camera.

His death marks the end of an era for many Filipinos who grew up watching his TV shows “GMA Supershow,” “That’s Entertainment,” and his late-night program, “Walang Tulugan with the Master Showman,” where the catchphrase “Walang tulugan” was coined.

Vilma Santos, actress and Batangas governor: He was a good person with a genuine heart. Numerous actors owe him a debt of gratitude for his tireless dedication as a star builder. Such a big loss! My prayers for the eternal repose of his soul—and strength for his family.

Ali Sotto, actress and fellow dzBB radio host: Every Chinese New Year, Kuya Germs gifted me with crisp peso bills in an ang pao. He knew that I kept each one stuffed in my bank’s passbook—as a good luck charm. After his stroke last year, I didn’t get my usual red envelope. When he got well enough, I made lambing (gentle request) to him: “Kuya Germs, I became rich because of your ang pao!” and promptly received it soon after. He has taught me to love this profession, with passion, commitment and gratitude. This by far is the best ang pao he has given me!

Eula Valdes, actress: The Valdes and Amorsolo siblings grew up calling each other by our first names—no ates and kuyas for us. First time I guested in Kuya Germs’ Sunday show with the “Bagets” cast, I called him “German” on air! My then-manager, the late Mina del Rosario of Viva, gave me quite a tongue-lashing for not calling him Kuya Germs! I later apologized by sending him a gift and, from then on, I became a frequent guest in his morning show. Recently, I got to hug him during the unveiling of my star at the Walk of Fame.

Dindi Gallardo, beauty queen and actress:  I have many fond memories of Kuya Germs—from seeing him on TV on “That’s Entertainment” during my preadolescent years, to our brief but memorable chats in “GMA Supershow.” After a 14-year hiatus, I guested in “Walang Tulugan” last July—he gave me not only the warmest welcome-back hug, but a star on the Eastwood Walk of Fame last December. What stands out when I think of him is his passion for the business and his generosity. He worked tirelessly to entertain us all and helped launch so many recognizable names in the TV and film industry. He will certainly be missed.

Lani Mercado, actress, Cavite representative and former cohost in “GMA Supershow”: Kuya Germs was a dear father in show biz for me and (my husband) Bong Revilla. Despite his ailment, he would visit Bong in Camp Crame—he even visited last Dec. 25! We were so happy to see him without his wheelchair, and he moved around with just a cane. We will greatly miss him, even as our fondest memories of him will forever stay in our hearts.

Ai-Ai delas Alas, actress: Years ago, when I was just starting in the business, I would often ask P500 from him. Later, he raised it to P1,000. Modesty aside, when I made a name for myself, I gifted him with P10,000. He was so happy! But he would still give me P1,000 every time he saw me. He also gave (my boyfriend) Gerald (Sibayan) money on his birthday. We are so sad.

Lorna Tolentino, actress: Kuya Germs will always believe in your talent and your potential to make it in the industry. It was only in his show where I agreed to sing live!

Ogie Alcasid, singer: He was my ninong sa kasal (principal sponsor), twice over. Throughout my professional and personal life, he was always there. He was amazing—a real servant of God. Even after I moved to TV5, I insisted on guesting in “Master Showman.” That’s what he was until the end: a consummate Master Showman!

Richard Gomez, actor: I will never forget Kuya Germs. He always gave me a can of Birch Tree milk and a huge bag of Best prawn crackers whenever I guested in his Sunday show. He would often invite me to play Jesus Christ, and I would get nailed on the cross for the Holy Week presentation of his Sunday show.

Ricky Davao, actor-director: He discovered me when I was 13, when I accompanied my father (Charlie Davao) to the ABS-CBN studio. My dad and Kuya Germs were both from Sampaguita (Productions). He made my guestings in the Sunday show, “Big Ike’s Happening,” possible. Later, he played Cupid to me and my wife, Jackie Lou Blanco (who was his cohost in “GMA Supershow”). He was like a father to us. You could always approach him whenever you had problems—whether about work or family life.

Aiko Melendez, actress: Kuya Germs was always friendly to me, and he made sure I was OK whenever I guested in his show. He always asked me if I needed anything. He was soft-spoken and kind.

Felipe L. Gozon, chair and CEO of GMA Network: I defended him when he got sued over the rights to “Germspesyal.” He was so scared of landing in jail, but we won that case. He was not only a loyal talent, he was also very professional. He used to joke that GMA stood for “German Moreno and Associates.” His love for the industry and its people is unmatched in its sincerity. He was the real deal.

Toto Villareal, chair of the Movie and Television Review and Classification Board (MTRCB): I met him when I was in high school, and my classmates and I had to interview him for our Broadcasting school project. Although he was famous and didn’t know us from Adam, Kuya Germs graciously invited us to his radio booth in dzBB to observe, and even introduced us to then-aspiring singer Imelda Papin, whom he was helping. Years later, he was always there to support the MTRCB’s undertakings. Despite his frail health, he graced our 30th anniversary last October. Ever humble, he called me up earlier to “apologize,” because he couldn’t stay long. I’m not ashamed to admit that I shed tears for this great and generous man!

Lea Salonga, singer-actress and member of the Thursday group of “That’s Entertainment”: The show biz industry now seems strange without him in it! Love him or not, one thing that can be said is that he had an incredibly big heart, and always wanted to help make young show biz dreamers’ dreams come true. Just look at how many young artists went through the doors of “That’s” all those years ago. I was one of them—and I’m grateful for the opportunity!

Lotlot de Leon, actress and member of the Monday group of “That’s Entertainment”:  He instilled professionalism in all of us when we were starting out in “That’s.” He told us stories about his beginnings in Clover Theater, so that we would learn how to love and appreciate our work. When we were small and lived in Valencia, my brother Ian (de Leon) and I would cross the street to his house, so we could play with his son, Federico. Every Sunday, he would take us shopping at Virra Mall in Greenhills. I will never forget his being helpful and loving to me and my siblings and to my mom (Nora Aunor). I am speechless.