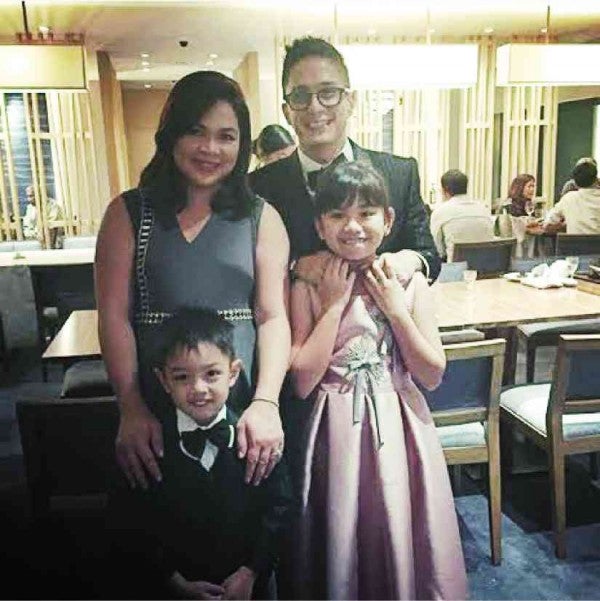 THE AGONCILLOS: Judy Ann Santos and Ryan Agoncillo with kids Lucho and Yohan

When she was young and innocent, Glamorous Beauty dreamed of marrying a knight in shining armor.

GB’s Prince Charming, however, metamorphosed into the Prince of Darkness.

GB’s biggest fear has come to pass and she has ended up in a loveless marriage.

GB has no choice but to turn a blind eye to RS’ shenanigans. Is GB simply in denial that her fairy tale has turned into a horror story?

Who knew Cantankerous Celebrity can be cool as a cucumber as well?

Notorious for going ballistic at the slightest provocation, CC was unusually serene when Long-suffering Partner missed a step and stumbled down to the ground.

Was CC dead calm or was it deadma?

Or has Botox overdose rendered CC’s face expressionless even when confronted by disaster?

Seems Old Frenemy is at it again—scheming to undermine PS’ latest endeavor.

PS is simply waiting for the right time. “If OF makes another wrong move, I will let the cat out of the bag,” PS threatened.

Persistent PS has sought the help of another Major Celebrity in this brewing battle.

Pampered Insider is a self-confessed fool for love.

PI once got involved with Gung-ho Personality who was already committed to Colorful Celebrity.

GP and CC eventually parted ways and PI was blamed as the culprit.

GW was previously linked to Wealthy Benefactor, but once again PI was cast as the third wheel.

Talk about history repeating itself.

Vociferous Celebrity can win the Inventor of the Year award.

VC would regularly call up drumbeaters to instruct them to concoct various controversies.

“Invent an intrigue and then interview me so I can deny it,” VC told shocked publicists.

VC would frequently come up with all sorts of rumors, just to revive a moribund career.

With that one word, TV host-actor Ryan Agoncillo announced the birth of his second child Juana Luisa, or simply Luna, last Friday.

“Luna is out na,” Noel Ferrer, Ryan’s manager, told Rushes. “That’s the other face of show biz, in spite of our sadness after Kuya Germs’ death.”

MMFF entry nina Coco Martin at Vice Ganda naka-P400M na sa takilya. (Results were supposed to be secret until after the festival’s run.)

Read Next
Cinemalaya’s call for short film entries
EDITORS' PICK
‘A greener, cleaner tomorrow’: A how-to guide for Filipinos who want to help with today’s energy crisis
DOH: Second person ‘under investigation’ for 2019-nCoV in Tacloban City
China expands lockdowns to 25M people to halt viral outbreak
SM continues to send relief assistance to remote towns in Batangas
5-year-old Chinese boy in Cebu tests negative for novel coronavirus
Get exciting deals and discounts when you download the new McDonald’s App
MOST READ
PH to ‘start process’ of VFA termination — Locsin
Dina Bonnevie on Coney Reyes: We have forgiven each other
Duterte: China, Russia have respect for PH sovereignty
‘More friends, the better:’ Bato wants Duterte to attend US-Asean summit
Don't miss out on the latest news and information.