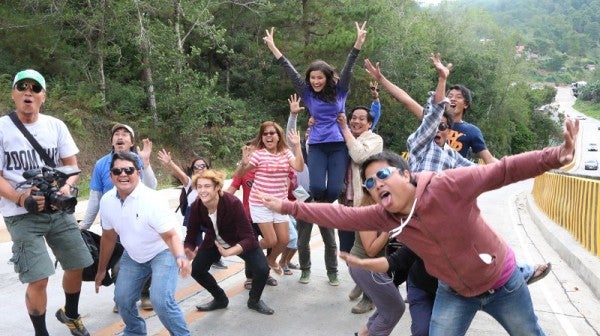 A talent in ABS-CBN television series “Forevermore” took to social media to air her grievances against director Cathy Garcia-Molina, whom she said cursed and humiliated her boyfriend who agreed to play a role as substitute actor in the former primetime drama in 2014.

Domingo said a boss from ABS-CBN told them that Molina was “known for cursing in the set” and that was her way of coping with stress, adding that it has been more than a year since she and her boyfriend, historian and educator Alvin Campomanes from the University of the Philippines, filed a complaint before the broadcast giant.

Domingo shared a copy of the complaint they filed on Oct. 22, 2014 addressed to ABS-CBN broadcast head Cory Vidanes.

Campomanes, one of those often invited by networks for interviews during historical commemorations, said he wrote the letter “to the protest the indignities” that he had suffered as talent in a location shooting of Forevermore on Oct. 6-7, 2014 in Baguio.

Campomanes lamented how Molina said that the soap was meant to “teach it values” to its viewers as she led the prayer on the first taping day, but noted that her “pious pronouncements” supposedly contradicted her treatment of bit players.

“Her hypocrisy was disconcerting to watch. She was servile to Luz Fernandez, courteous to Joe Gruta, solicitous to Liza Soberano, and friendly to Joey Marquez and Irma Adlawan. Liza committed a lot of mistakes in delivering simple lines, but the director shielded her from criticism. She never uttered anything that could embarrass the young actress. This sensitiveness to the feelings of others however, was selective; it was only for stars and veteran actors,” he said.

The academic said Molina instructed talents on set by “shouting, insulting, and spitting of curses.”

“I was verbally abused.’P***** i**! Ang hirap turuan!’ ‘K**** ina!’ ‘P*****t ka, Makoy!’ At that point, I remember Joey Marquez spared me from further humiliation by coaching me on how to position my body for that particular scene. I believe he was uncomfortable seeing me endure all those hurtful remarks, aware as he was that his daughter Winwyn was my student in San Beda,” Campomanes said.

“As a matter of prudence, I struggled to maintain my composure. I did not want to engage a woman who is almost as old as my parents in a shouting match. I am the better person. I was raised well by my parents. I was formed well by my teachers. I am an educator. I had the moral ascendancy,” he added.

Campomanes said things did not get better on the second taping day as he was “denigrated” again by the director for committing errors in blocking.

“I remember her shouting the following: “Makoy! Nasaan ang camera mo!” “T*** i**!”and “Alam mo, ikaw, inutil ka.” I saw how people in the production staff grinned and laughed at me. The director did not tell them to stop,” he recalled, saying that she finished the scene “despite the mental and emotional anguish.”

He also scored talent coordinator John Leonardo, who supposedly asked him to be absent in his class to shoot another sequence the following morning despite their agreement of just a day of shooting and pay the amount that he would lose from his absence.

“I kept on asking John if there are still sequences to be shot on that day. I reminded him of our agreement. Instead of being grateful that I stayed for another day, he told me this: ‘Ang kulit-kulit mo! Galit na galit si direk sa ‘yo.’ I answered him politely: ‘Alam mo namang hindi ko linya ito, first time kong umarte sa telebisyon.’ He immediately retorted with a rudeness that I will remember for a long time: ‘Ay nako! kahit na!’ he said.

Campomanes and Domingo dropped their roles and left the following morning. Campones called on ABS-CBN to impose disciplinary actions against Molina and Leonardo as a “challenge of integrity” to prove that its core values are more important than “ratings, revenues, and profits.”

“We are so used to television networks exposing corruption in government. But there is also much to be exposed in the rotten system of talent recruitment for television and film. For example, do networks really know how much are the talents being paid for long hours of work? In a system devoid of transparency, bit players cannot even know how many middle men are taking cuts from their pittance,” he added.