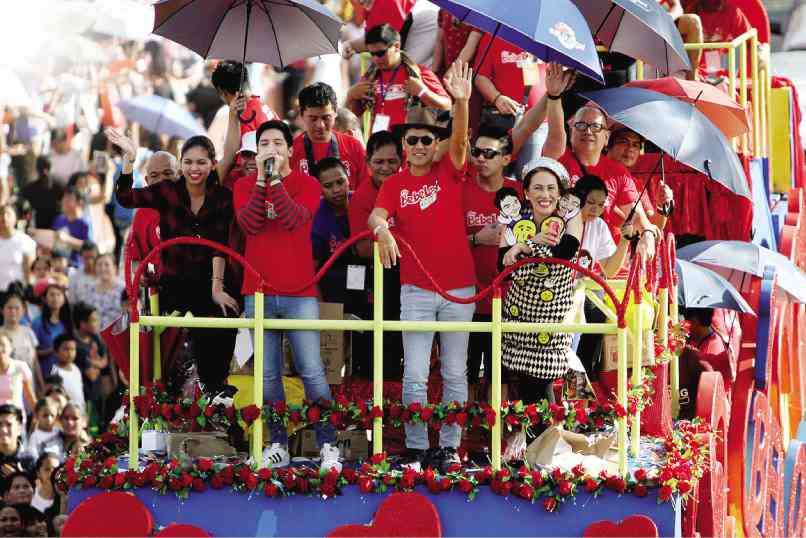 When TP reports on the set, he often reeks of alcohol—prompting peers to wonder if his favorite perfume is called Pale Pilsen.

Once, TP arrived at work, brandishing a cup from a famous coffee shop. When a coworker got a sniff of the supposed brew, it smelled suspiciously like brandy, not coffee.

TP’s addiction is getting worse by the minute. In this season of endless partying, can someone act as TP’s designated driver—before he encounters a mishap on the road?

While putting the finishing touches on a project, Powerful Veteran had a heart-to-heart chat with Flamboyant Colleague.

Talk turned to matters of the heart. PV was shocked to discover that FC and Hunky Ward have been together for over two decades—and their affair is going strong, thank you.

FC is doggedly loyal to HW—and vice versa. Even though HW has already settled down and is raising his own kids, he still regards FC as his first “wife.”

Welcome to the First Wives’ Club.

CI blocked VN’s career every step of the way. CI dismissed VN as talentless and obnoxious. Although CI was not exactly mistaken, VN’s eventual exit was the final straw—especially since the upstart inexplicably hit it big in rival firm.

Soon enough, CI ended up in the departure area and was unceremoniously dumped by the Big Bosses.

Feisty Supporter of Gifted Newbie isn’t surprised that the naïve guy got his Hot Lover preggers.

Turned out HL is more aggressive than GN. FS witnessed how HL would run after GN. HL herself would knock on GN’s bedroom door. No wonder HL got knocked up.

Needless to say, FS abhors HL—and will do everything to drive a wedge between her and GN.

Here’s good news for a change.

Although most of his relatives and friends gave up on him, Promising Cutie still persevered and was able to turn a new leaf.

With the help of Influential Insider, PC successfully kicked a nasty habit. PC underwent rehab for months and, after cleaning up his act, was kept busy with a slew of projects.

PC is now a changed man—just in time for the new year!