Can’t stop the ‘School of Rock’ 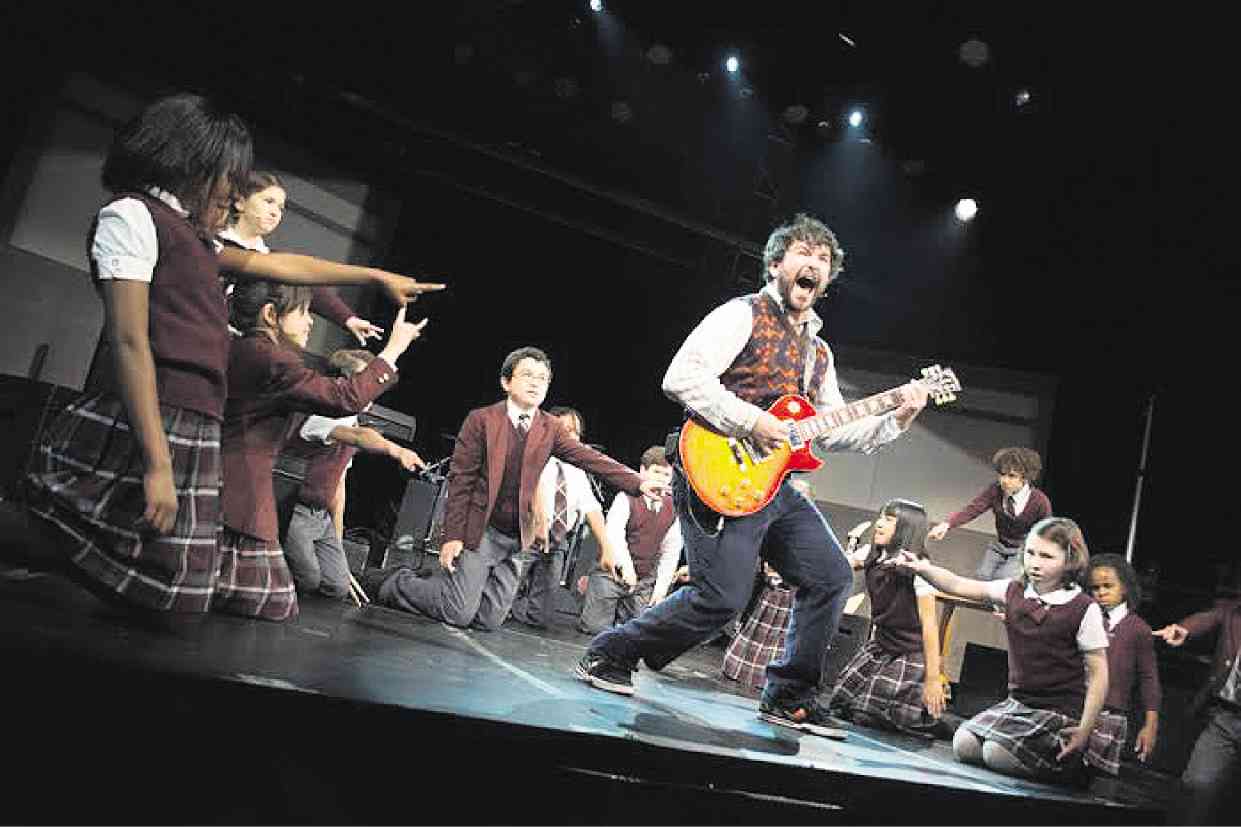 Scene from the Broadway musical AP

The brand-new musical, “School of Rock,” opened earlier this month at Winter Garden Theater. Based on the film of the same name starring Jack Black, the musical tells the tale of Dewey Finn and a classroom full of musical prodigies, and ends with the entire audience up on its feet, heads banging to the music.

Dewey Finn (played with earnest energy and serious rock singing chops by Alex Brightman) is renting a room at the house of his friend Ned (Spencer Moses) and his girlfriend Patty (Mamie Parris). Kicked out by his rock band and deep in debt, Dewey’s only hope is to win the Battle of the Bands competition.

Opportunity knocks (or in this case, calls), and Dewey takes it, ending up a substitute teacher at Horace Green Prep School. He discovers that the children in his charge are actually musically gifted, so he prepares them to compete. But at the end of the day, he falls in love with this classroom of kids, getting to know them far better than their parents do (one song performed by the kids, “If Only You Would Listen,” and its accompanying reprise show just how ignored they all are, and how Dewey is adored).

On this Monday evening, the house was filled with families. Everywhere we turned (I came to the show with my husband Rob and daughter Nicole, still reeling from jet lag), there were children and teenagers. We arrived a half-hour early, so we went ahead and settled ourselves in.

The show is heaps of fun, if you’re into rock music and watching young kids play and perform. On my end, I also had a lot of fun seeing a bunch of my friends onstage. Besides Alex, there was also Sierra Boggess, with whom I spent a month in Japan working on a show titled “4Stars”; Jaygee Macapugay, making her Broadway debut; Alan H. Green, with whom I worked on the “Ragtime” concert at Lincoln Center; Natalie Charle Ellis, with whom I share a mutual friend in former “Cinderella” costar Peter Saide; Tally Sessions, who was one of the many actors that came through in the readings process of “Allegiance”; and finally, Isabella Russo, who was only a toddler when I met her in Los Angeles, carried by her mommy Kristi, who is a “Miss Saigon” (second National Tour) alumna. Her father, Chris, is also a “Saigon” alumnus, so of course their daughter would become a performer!

As enjoyable as the whole show is (with lyrics written by Glenn Slater, book by Julian Fellowes, direction by Laurence Connor, choreography by JoAnn M. Hunter and music supervision by Ethan Popp), the highlight is any time the kids are onstage. I mean, who wouldn’t be a sucker for these musical prodigies playing music incredibly well right in front of you?

There are four main musicians of the band formed in the classroom: guitarist Brandon Niederauer, bassist Evie Dolan (who also plays the ukulele, mandolin, guitar and saxophone), keyboardist Jared Parker and drummer Dante Melucci, plus vocalists Bobbi MacKenzie (oh goodness, this little one can sing), Corinne Wilson and Shahadi Wright Joseph. Each of them goes above and beyond competence. They don’t play to be cute: they play to be amazing!

Alex as Dewey Finn is onstage for the entire show, save for maybe seven minutes. He is rocking hard, whether or not he has a guitar in his hand. He is a star presence, whose big heart really comes on display the minute the kids are anywhere around him.

Sierra as the principal Rosalie Mullins doesn’t get to sing as much as I would like her to, but she does wail Mozart’s “Queen of the Night” from “Eine Kleine Nachtmusik,” which is a special treat! She is one rare bird that can switch from classical to contemporary and I loved seeing her on the Broadway stage, finally.

I am hoping that “School of Rock” enjoys a wonderful Broadway run! This is definitely a show to take in with your kids. If you enjoyed the movie, you’ll love the show!

Despite the more-than-memorable way the crown was given, at the end of the day, our girl has the win. Congratulations to the newest Miss Universe, Pia Alonzo Wurtzbach. You have given every single Filipino all over the world something to smile about. Mabuhay ka!