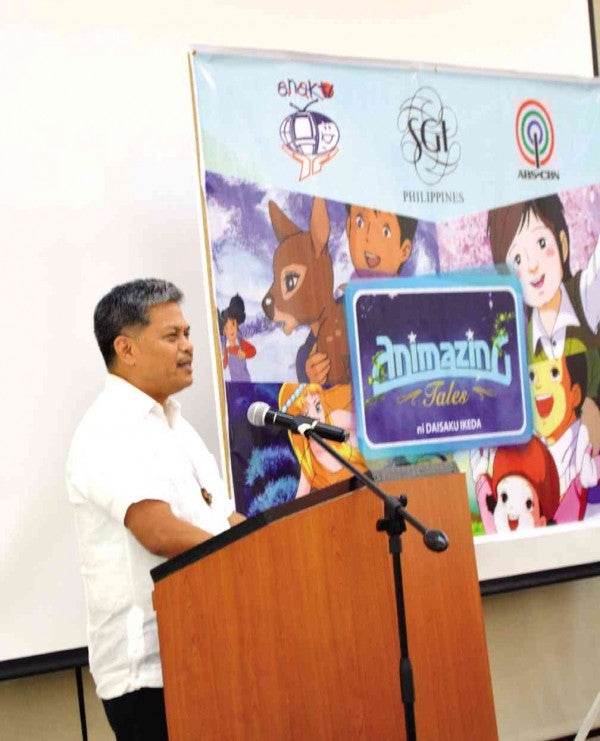 Advocacy group Anak TV and the Department of Education recently teamed up to encourage students to watch cartoons in school—for values education.

Ikeda has been awarded about 300 honorary doctorates and professorships from institutes of higher learning in more than 40 countries.

The DVDs come with a teacher’s guide for discussions after screenings and are distributed for free by Anak TV and DepEd, in partnership with ABS-CBN and Soka Gakkai International (SGI). Ikeda is also president of SGI.

Anak TV president Elvira Yap Go emphasized the need for storytelling to impart values through a popular medium such as television.

“Because of ‘Animazing Tales,’ it would be easier for the teachers to illustrate and discuss values and character formation in class… the values become clearer to children,” she said.

She added that each show touches on values such as respect, love for family, friendship, peace and sportsmanship.

“The students will bring these values with them until they grow up—whether they turn out to be leaders or professionals. They will remember these tales,” Go said.

Education Secretary Armin Luistro said that while values may be universal, the method to understand them varies, often according to one’s culture.

“We need more stories like these, especially Asian and Filipino stories, because most of what’s available out there are of western origin such as Cinderella… the stories here are closer to home, making it easier for children to understand,” he said.

Anak TV intends to produce more copies for other parts of the country, according to the group. Go emphasized that the DVDs are not for sale nor set for commercial use.

Teachers, principals and students present at the launch were treated to a sample screening of the series, “Ang Prinsipe at ang Dagat ng Koral (The Prince and the Sea of Coral),” which tells the story of a boy who saved his island home from a tsunami with the help of a mermaid’s magic shell.

“It doesn’t matter where the story is situated; what’s important is how kids can relate to, and learn from it,” she said.

Luistro encouraged students, writers and animators to produce similar projects that would capture the young Filipino’s imagination. “It requires a certain kind of imagination for a writer and a director to take the perspective of young people so that we could share these enduring values with them,” he said.