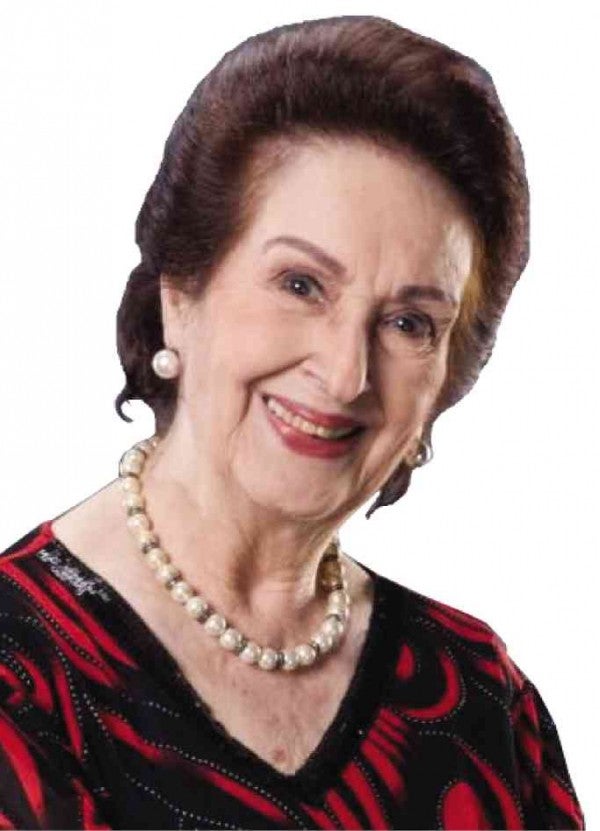 ROMERO. Has only had three huge birthday parties in her life.

Some three years ago, GMA 7 conducted a survey to determine who among their stars had the widest reach nationwide. Sen. Bong Revilla topped the list. In second place was—drum roll, please—Gloria Romero, at almost 80 years old! Yes, she made chopped liver out of the station’s young talents in that survey.

Last Dec. 16, she turned 82—still on top of the game and very much in demand for soaps.

Like in previous birthdays, she just went to Mass and ate out with daughter Maritess and grandson Christopher. She has only had three huge birthday parties in her life. The last one was when she turned 79, which was made to appear like she was turning 80, in accordance with Chinese beliefs (never mind if she is not Chinese). It was a surprise birthday party organized by Maritess.

Her first big birthday bash was given to her by Sampaguita Pictures when she turned 21. She wore a Ramon Valera dress to that affair.

But the bigger surprise from Sampaguita Pictures could not be gift-wrapped: A house and lot on 7th st. in New Manila—the very same residence she maintains to this day! The place was fully furnished—with beautiful interiors—and all Gloria had to do was move in with her family.

The only time she didn’t live there was when she and late husband Juancho Gutierrez built their own home near Balete Drive, also in New Manila. But eventually she moved back to 7th st. and this was also where Juancho spent his last days.

At 82, she doesn’t have major health concerns, except for vertigo. Now that she’s done with another birthday, the big excitement for 2016 concerns not a movie nor TV project, but the return of her brother Gilbert after almost 50 years of living in the United States.

Dr. Gilbert Galla is the youngest brother Gloria sent to medical school. He never got married and took care of the children of his brother, Tito Galla, who succumbed to brain cancer in 1979.

Gilbert had expressed his desire to stay in a condo, but big sister Gloria wouldn’t hear of it. Gloria is now having a room added to her New Manila home for her brother, now 74. It is Maritess who oversees the construction.

Gloria couldn’t be happier. She continues to work on TV and has even done a couple of indie films. She still looks radiant even if she has not undergone any cosmetic procedure, save for an eye bag operation.

Her secret to still looking good at 82? “I don’t diet, but I eat everything in moderation,” she shares. From time to time, she visits the Flawless clinics for facials and other minor beauty regimen. And when she feels like she had gained weight, she does brisk walking in New Manila.

Eternally modest, she gets embarrassed talking about her career achievements and points to Anita Linda—nine years older and still active—as the true measure of longevity. She’s grateful to the Lord, though, “for still being around.”

But surely she wouldn’t mind staying a little longer (and neither do we). After all, there’s still Anita Linda’s record to beat!