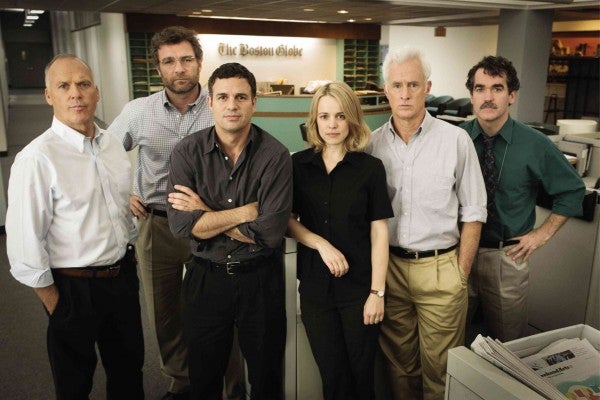 Nominees for the 2015 Oscar awards won’t be announced until Jan. 14, 2016, but film buffs antsy about second-guessing the outcome of the prestigious race for cinematic honors would do well to take a gander at these hopefully educated predictions of potential winners:

For best picture, “Spotlight” has been getting a lot of attention and some early awards from other groups for its unblinking look into predatory priests whose covert, youth-traumatizing practices were glaringly exposed by a crusading newspaper in Boston in 2001.

For its part, “Joy” is David O. Russell’s inspiring take on the rags-to-riches story of the impoverished single mom (Jennifer Lawrence) who invented the self-wringing Miracle Mop.

Danny Boyle’s “Steve Jobs” is also getting singled out because its chosen protagonist (portrayed by Michael Fassbender) was such an influential force in helping make the plugged-in world what it is today. Further upping the filming dramatic and ironic ante is the fact that its titular character was a tech visionary “whose genius threatened to corrupt his ethics.”

Alejandro Gonzalez Iñarritu’s “The Revenant” is about a trapper (Leonardo DiCaprio) “fatally” attacked by a ferocious bear. He manages to survive and heal himself so he can avenge his “death.” The film’s “extreme” depiction of survival tactics tend to distract from the production’s less overt virtues, but they do come to the fore forcefully enough to make this film a contender.

Steven Spielberg’s “Bridge of Spies” is also seen as a flawed and sometimes contradictory production, but its key portrayals (Tom Hanks and ensemble) are able to mitigate its more literal aspects (yes, there’s an actual bridge) in the end.

“Brooklyn,” by John Crowley, is an immigrant’s tale set in 1951 that revolves around a young Irish emigre (Saoirse Ronan) who goes “from crippling homesickness to blooming confidence”—and thus dramatically vivifies The American Dream. The inspiring period film may not play as well in international competitions, but the Oscars could warm up to it in a winningly fervent way.

Brie Larson’s “Room” is about a young woman and her son who are trapped in a very small room for years by a monster who occasionally drops by—to rape her again. The claustrophobic production does open up later, but its best suit is still its “trapped and hopeless” sequences—and its ability to seek the light of insight even in its world of utter darkness.

Finally, filmmaker J.J. Abrams has adamantly refused to give any details about his “Star Wars: The Force Awakens” production, but we have gleaned that its original stars, Harrison Ford, Mark Hamill and Carrie Fisher, as their respective characters, are back after 30 years, much the worse for wear! More to the point, the 2015 update “revolves around a new resistance to galactic troublemakers The First Order.”

If “The Force Awakens” lives up to its advance hype (and ticket sales), it could end up as a record-breaker at the global box office. But will it also turn out to be an “awardable” film? Let’s hope that it does pull off that double-whammy—all fingers crossed!