Christmas is everybody’s time to shine 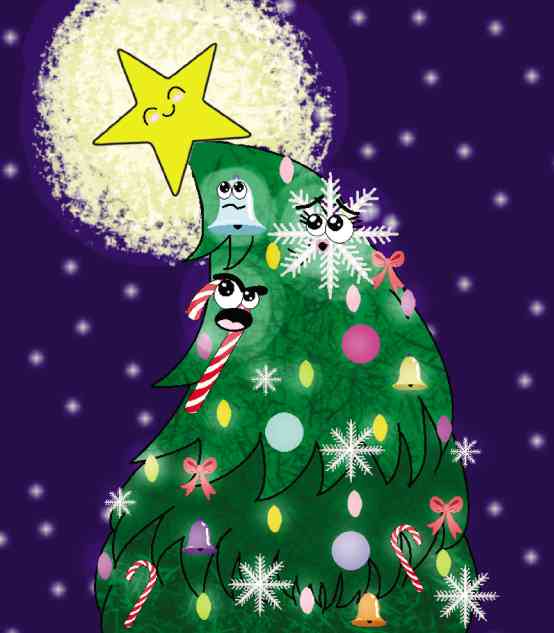 Every December in the town of Kutitap, villagers were excited as they counted the days before the lighting ceremony for the giant Christmas tree at the town square.

It took weeks before the Yuletide tree—decorated with many ornaments in various colors, shapes and sizes—was unveiled. The star on top of the tree was the main attraction—it blazed so brightly that villagers could see it even from the farthest side of town!

But the Christmas ornaments were were all in a bad mood! Every year, they’d been envious of the Star placed on top of their tree. They thought the “crowning glory” was proud and always craved for the exclusive attention of the admiring populace!

“Here we are again, getting ready for the big day,” sighed Ding, the blue bell.

“Aren’t you excited to get out of this box?” asked Icy, the snowflake.

“Not with that proud Star around!” replied Sticks, the candy cane.

Star, on the other hand, was quiet inside her big box. She pretended not to hear the commotion—but she was hurt because she really wanted to be friends with everybody.

“There goes the celebrity,” sniffed Sticks.

“Don’t you feel just a little jealous of Star after all these years, Icy? Don’t you hear the villagers say ‘Wow, look at that beautiful star’ when Star’s lights are turned on? Do you ever hear them say, ‘That’s a pretty snowflake—or that’s a colorful candy cane?’ —Never!” fumed Sticks.

One by one, the ornaments were placed on the tree’s branches. They frowned as workers hoisted Star to the top of the Christmas tree. —Star knew what they were thinking—and thought up a plan:

One night, the workers did a dry run to check if the lights were working. When a button was pressed, the Christmas lights lit up—except for Star!

The worker pressed the button again and again, but nothing happened.

Despite the glitch, the ornaments did not rejoice. They were puzzled, confused, and felt like there was something missing.

“I think something’s up with Star. I’ll check,” said Icy.

Grudgingly, Sticks and Ding went along with Icy.

“Hi, Star, is everything OK? You were fine before you got up here,” Icy asked. “—What happened?”

“Well,” Star finally admitted, “I thought this was the only way to make you all happy. I’ve heard what everybody has been saying about me for years! You think I’m arrogant and always want to be the most popular one. —But, you’re wrong!” Star blurted out, tearing up a bit. Sticks and Ding looked at each other, surprised.

“You think you’re not important but that’s not true! You’ve all been so busy making such a big fuss about me that you’ve forgotten how beautiful and special you are! Look at you Icy, you sparkle even without a light! And Sticks has such bright and cheerful colors! And Ding makes a sweet sound whenever the wind blows through the branches of our tree!

“Every year I do my best to shine brightly—not to show off, but to shine on all of you! I want the villagers to see how precious you all are!”

Icy, Sticks and Ding were stunned to finally see the “light” of Star’s good intentions!

The big day arrived and the excited villagers filled the town square to witness the tree-lighting ceremony.

For the first time in years, Icy, Sticks, Ding and the other ornaments were all thrilled and happy. Star promised them the best lighting ceremony ever!

The Christmas tree blazed more radiantly than ever before! —And, for the first time, the ornaments felt truly special—as everyone and everything that contributes to the sharing spirit of Christmas should!