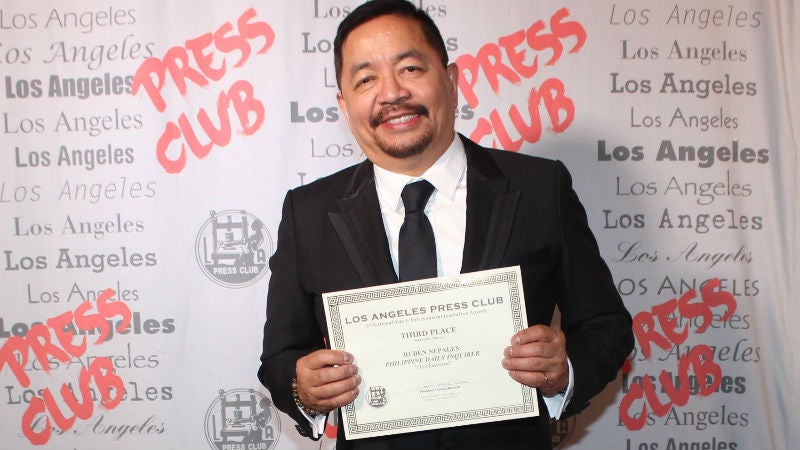 “I WAS proud to represent PDI,” said Inquirer columnist Ruben V. Nepales of his victory in the Los Angeles Press Club’s 2015 National Entertainment and Journalism (NAEJ) Awards in an e-mail to the Philippine Daily Inquirer. The awarding ceremony was held on Sunday evening (Monday in Manila) at the Crystal Ballroom of the Millennium Biltmore Hotel in Los Angeles.

Nepales, an LA-based entertainment writer and correspondent, won third place in the feature photo category for his photograph of actor-filmmaker Clint Eastwood, which was featured in his thrice-weekly column, “Only In Hollywood,” on Jan. 4.

Other winners were photographers representing the Television Academy’s Emmy Magazine.

The NAEJ is a United States-wide journalism awards competition presented by the Los Angeles Press Club that focuses on arts and entertainment reporters and editors in various platforms.

The columnist was also a finalist in the general news category (print—newspapers or magazines) for his Feb. 27 story on actor Eddie Redmayne and other Academy awardees, titled “Backstage with ‘weird’ Oscar winner.”

In that category, he competed against journalists representing what he called “giants”—The Hollywood Reporter, Bloomberg News and Los Angeles Business Journal.

In 2012, Nepales won twice in the LA Press Club’s annual tilt: third place in the best columnist-print category for “Only In Hollywood,” and third prize for best book, “The Filipino Connection: The Philippines in Hollywood.”

Read Next
Trick or treat for ‘noche buena’
EDITORS' PICK
Notice of 2020 regular meeting of stockholders June 18, 2020
SM prepares for ‘safe malling’
Leveling up your ‘lutong bahay’ with the kitchen companion you never knew you needed
NBI, Immigration to join hunt for ‘underground’ medical clinics
2 Chinese nationals arrested in raid on another unlicensed COVID-19 hospital in Pampanga
P2.2 trillion in losses: Cost of COVID-19 impact on PH economy
MOST READ
Revillame tells Roque: ABS-CBN is in my heart despite being in rival network
NCR is ready for GCQ — Palace
LOOK: Robredo, Vico Sotto, check Community Mart ops in Pasig
Año: Quarantine passes not needed in GCQ, movement restricted to essential travel
Don't miss out on the latest news and information.