Jolina Magdangal back to her first love

’Tis the season to be Joli(na) with Jolens Magdangal’s new album, “Back to Love” (Star Music).

Here’s my one-on-one with Jolina:

What’s your fave cut in the album?

My husband’s (Mark Escueta) song for me, “Ganito Pala.” He started composing it when we were still dating but finished it just recently. We included our baby Pele’s voice in the final mix, because he loves to sing.

Why should music lovers grab a copy of your album?

I am very happy that Star Music has allowed me to release an album with mostly original songs. It’s a big step forward for me in terms of my musical career, which is my first love. I am very honored to have been able to work with some of the country’s greatest composers and for the first time I was able to get more involved in the arrangement and recording process—even in the album layout!

How have  marriage and motherhood changed you?

Marriage has made me  more confident to face what life has to offer, because I know I have an ally for life in Mark. Motherhood has made me selfless because I will definitely do anything for my boy.

Tell us the latest about Pele.

Pele is learning to sing faster than he can talk. He also loves to dance. Sometimes, he points to the speakers because he wants us to play music. He’s also starting to run around, which is a little scary. He’s shy for a few minutes, then he becomes sociable. 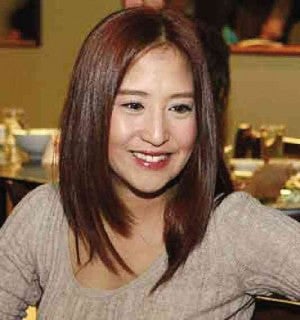 JOLINA Magdangal’s favorite song in the album is “Ganito Pala,” composed by her husband Mark Escueta.

How do you and Mark resolve misunderstandings?

We always try to talk right away if there are any issues. No misunderstanding is worth wasting precious time.

What’s a fashion no-no for you?

Wearing something you don’t  like but you wear it kasi nasa uso  (because it’s trendy).

What are your cheap thrills with Mark?

What’s the sweetest thing  Mark has done for you?

Every time he wakes up in the morning, he never fails to kiss me!

Sassy Actress (SA) is being  such a drama queen lately. People privy to her love life insist that she has been impatiently waiting for  a marriage proposal from her actor/boyfriend. SA even went to the extent of going to a far-flung place, in the hope that her BF would follow and propose there. But she’s waiting in vain. A close kin of her BF reveals that marriage is not on his agenda yet.

How uncouth of this Chatty Celebrity (CC) to take credit for an accomplishment, which was pulled off for her by an unsung hero. It’s her desperate attempt to make it seem like her talents transcend show business.

Piolo, on the other hand, presented the award for best telenovela with Karla Mosley of “The Bold and the Beautiful.”