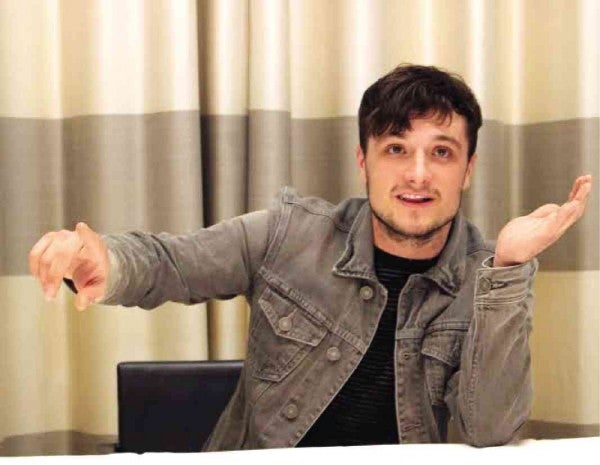 Hutcherson is grateful that he didn’t turn into one of those “unfortunate” ex-child stars. RUBEN V. NEPALES

LOS ANGELES—Josh Hutcherson revealed to us that he has not one, but three film projects with James Franco. Now that he’s done playing Peeta in “The Hunger Games” series, Josh said he is ready for interesting, original stories and filmmakers, especially James. Aside from starring in the actor-director’s two films, “In Dubious Battle” and “The Long Home,” the 23-year-old bared that he and James are planning a third collaboration, set in 1970s New York, which they plan to shoot next year.

A former child actor who began when he was 9 years old, Josh has grown into a genial, articulate young man. He expressed gratitude that he didn’t turn into one of those “unfortunate” ex-child stars.

You virtually live out of a suitcase, especially these days that you are on press tour for this movie. Do you enjoy it? What are the things that you always bring?

Press tours are tough, sometimes. It’s a lot of traveling and not very much (free) time.

I’m excited about being on tour for the last time with the group. It’s hard, but we have a couple of rest days.

I am a light packer. I actually made a mistake on this trip. I didn’t bring nearly enough underwear.

I always bring incense with me. And the scent is Nag Champa.

How have you decorated your home? Do you still live in the house that was once owned by Heath Ledger?

It’s so important to have a home base. When you travel the world so much, to be able to have that kind of oasis that is yours and your space is very relaxing—it grounds you in a way. As for me decorating my home, I’m not very good at it (laughs). I like to mix things and styles. I don’t like to be very modern. I like to be comfortable and homey with dark colors and art work.

My dog—he’s not a decoration (laughs)—but, he definitely makes the house my home. Heath was one of the most incredible actors, so to know that I have been in the same space as him is pretty cool!

What is your dog’s breed?

He’s a pit bull. His name is Driver—and he’s the love of my life!

You recently worked in two films that James Franco directed. Can you talk about that experience?

James is so innovative, creative and out of his mind in the best way. He sent me this script called “In Dubious Battle.” It’s the first one I did with him. It has an incredible cast, with Robert Duvall, Sam Shepard, Bryan Cranston, James and Nat Wolff, whom I love.

It was a different part for me. I got to play this stupid sort of Southern a—–e. That’s something that I am familiar with, because I am from Kentucky, and I know a lot of stupid Southern a——s.

Then James talked about this other script called “The Long Home,” a revenge story, Southern gothic, set in the ’40s in the Tennessee mountains. James’ character is this devil moonshiner-bootlegger guy. My character seeks revenge on him for the death of my father. It’s a darker story.

The one that we’re trying to put together for next year is a great project set in New York in the 1970s around the art scene with film school students. Every script that James has sent me has been a work of incredible writing, with great characters.

That’s what I want—directors who are bold, who take chances and do things that aren’t conventional.

Your character in this movie is a baker. Do you cook in real life?

I do like to cook, but I like to grill more than cook. I have a bad habit of putting too much garlic on things.

I went through a very hard, rebellious teenage phase where, as some young people do, you think you know everything and your parents are monsters. I definitely went through that phase, at 15 or 16. I was a handful. I was sneaking out of my house and did bad things. So that was a phase that I’m not so proud of.

What am I proud of? I started “The Hunger Games” when I was 13. I’m grateful to my family, friends and the people I work with, who kept me focused and on the right track. I am proud of not becoming an unfortunate child star.

What did you learn from being part of this franchise? Anything that you struggled with the most?

After the first movie came out, that was the moment when a lot changed quickly. Even while going down the street to go to the grocery store, all of a sudden, people recognize you! That was intense and hard to deal with.

But I was 9 when I started. I didn’t have any concept of that. I wanted to make movies—that was my goal and passion. When I signed onto “The Hunger Games,” I read the script and the books, and I was like, that is a great character, and I am all in!

But now, I have gotten very comfortable with it and have accepted it as something I’m very fortunate for and, now, that has allowed me to continue with my career.

What has been the weirdest encounters with fans?

One of the weirder things is when you see them, and they are crying because you don’t know how to react.

One time, I was at my house in Kentucky with my family. I was having dinner with my grandparents. The doorbell rang, so my dad went to go get it. There were two girls and their mom. They drove for 10 hours to Kentucky, thinking that I might be there during the holiday season.

They were crying on the front porch of my childhood home, wearing Peeta T-shirts, with Peeta covers on their cell phones. That was a shocking moment. I had pictures with them and signed some things. But I also didn’t want to encourage it.

So, did you let them in?

No, I didn’t. I was like, I have got to go back inside, and I am with my family, sorry. I talked to them for a few minutes. It was a weird position to be in, for sure.

Thanks to this franchise, you’re now on top. Are you ready for a new chapter in your life and career? What would that be like?

I wouldn’t say the top. I have never been a goal-oriented person. That sounds like a bad thing, but for me, I have just been led by my drive and passion and not by an end game like, I have this many Twitter followers—I am a success. Or, I have made this much money—I’m a success. I don’t think that way. I always crave new things.

I have always wanted to direct. It’s been a passion of mine since I first started acting. I have been doing a lot more producing. I have projects I’ve been developing, and buying some rights to books and articles, and finding original stories and filmmakers who are very bold, and working with James, someone who has a clear voice and who’s doing interesting projects!