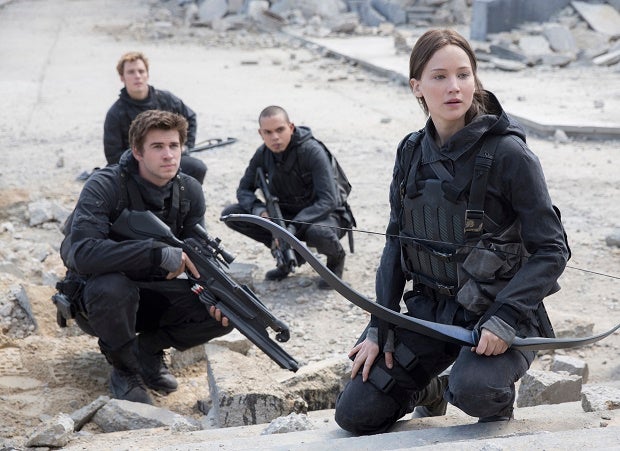 This photo provided by Lionsgate shows, Liam Hemsworth, left, as Gale Hawthorne, Sam Clafin, back left, as Finnick Odair, Evan Ross, back right, as Messalia, and Jennifer Lawrence, right, as Katniss Everdeen, in the film, “The Hunger Games: Mockingjay – Part 2.” The movie opens in U.S. theaters on Nov. 20, 2015. AP

“The Hunger Games: Mockingjay, Part 2” raked in $101 million in ticket sales in its opening weekend in the United States and Canada, according to ticket sales tracker Exhibitor Relations.

But it failed to meet the income of its predecessor, “Mockingjay, Part 1,” which opened at $121.9 million, according to ticket sales tracker Rentrak.

Nevertheless, the Hunger Games movie franchise, based on a trio of best-selling young adult fantasy novels by Suzanne Collins, had already grossed some $2.2 billion worldwide before the latest opening, according to Lionsgate, the studio that produced the films.

The books and the movies tell the story of Katniss Everdeen (Lawrence), a teenage heroine pitched into a deadly battle for survival in a macabre dystopian world.

In second place was “Spectre,” the latest James Bond movie, with gross sales of $14.6 million.

The star-studded spy thriller — with Daniel Craig as 007, and including Italian beauty Monica Bellucci and Austrian Oscar winner Christoph Waltz as the villain — has raked in $153.7 million in its three weeks in cinemas.

Third was the computer-animated 3D cartoon “The Peanuts Movie,” which pulled in $12.8 million.

The family-friendly film was the first big screen rendering in 35 years for the comic book characters created by the late Charles Schulz, who died in 2000.

“The Night Before,” a male buddy comedy starring Joseph Gordon-Levitt and Seth Rogen, opened with $10.1 million.