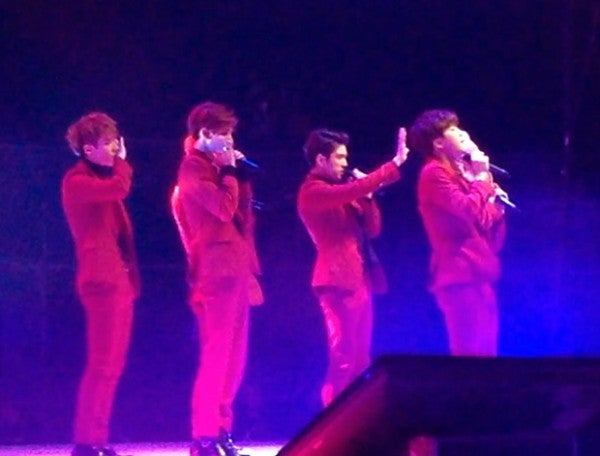 GOT7 members perform one of their hits. PHOTO BY HOTARU NIITSU

It seems that K-pop group GOT7—composed of JB, Mark, Junior, Jackson, Youngjae, BamBam and Yugyeom—fell for their Philippine fans, as they have returned to Manila a year after their first visit in the country.

Last Saturday, the seven-member group held their first ever fan meeting in the country.

It was a mixture of exhilarating performances of their hits, fun-filled games and surprises enjoyed not only by the fans but by GOT7 themselves as well.

The almost two-hour event was hosted by DJ and television host Sam Oh.

The fan meet was like a mini concert, which began and ended with performances.

Donned in full red suits and black inner, GOT7 opened the stage with “Stop stop it” from their first full-length album “Identify.”

They also performed other hits like “Girls girls girls”, “Just right” and “If you do.” 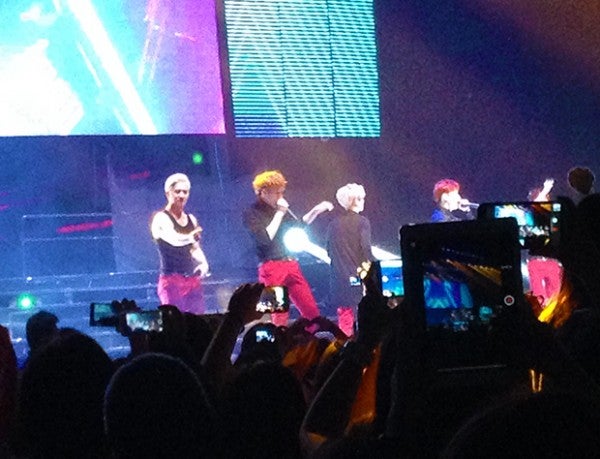 Crazy re-enactment of ‘If you do’ MV

The members of the multi-national boy group demonstrated their concepts in the music video of their latest song “If you do.”

The music video was very emotional and full of anger, but the re-enactment segment turned into a parody of their individual acts in the MV.

First, Yugyeom re-enacted his part by humorously hitting Junior’s back, instead of a door. In the music video, he was hitting the door so hard.

BamBam was then asked to demo his scene. He requested a car that he would hit, in which Jackson was volunteered.

Another funny demo was Mark’s. For Mark, all he did in the MV was to walk and so he did that, eliciting laughter.

Other members did their parts too, in a hilarious way. 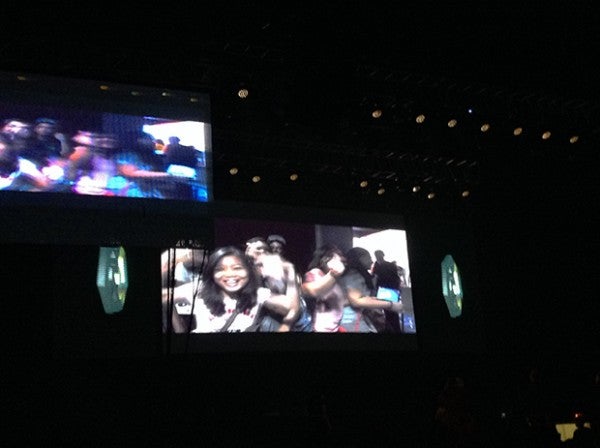 GOT7 tribute video prepared by fans is being shown on led screen. PHOTO BY HOTARU NIITSU

During a talk segment, at the fan meet, host Oh asked the boys what Filipino food they have tried and loved in the Philippines.

Jackson, their member from Hong Kong, showed his immense love for mangoes.

At the press conference, he mentioned that mango is the best and that he would look for the biggest mango tree in the country. At the fan meet, he asked the fans to reply “mango” as he said “mango.”

On the other hand, BamBam mentioned his liking for “peanut soup,” which Oh said was called “Kare-kare.” 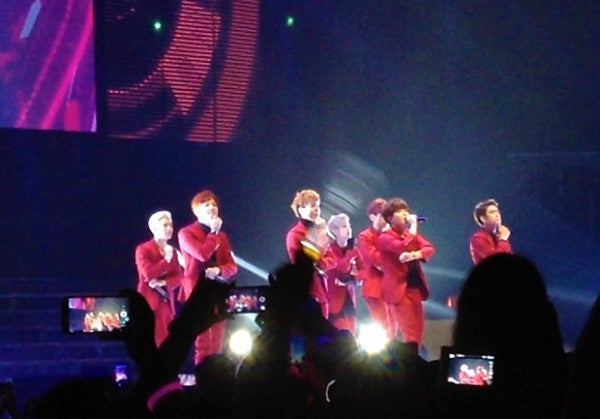 GOT7 dances along one of their songs. PHOTO BY HOTARU NIITSU

During the fan meet, GOT7 spiritedly played games with their PH “I GOT7,” their official fan club name.

Each game has different selected fans to play with the boy group.

The first game was called “Musical chairs,” wherein they have to walk in circles around the chairs and sit when the music stops.

At one point in the game, BamBam lost his seat to a fan but made the audience scream when he sat on the fan’s lap. 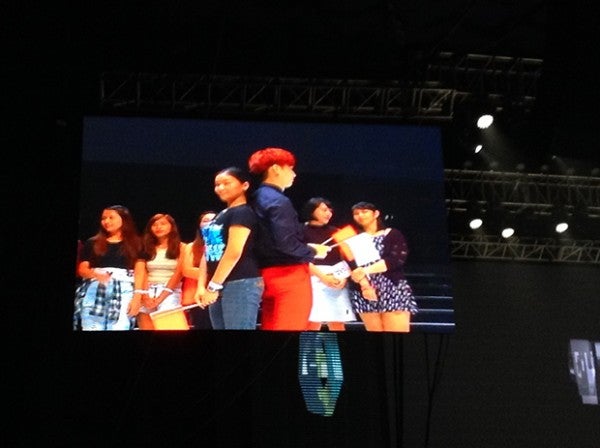 GOT7’s leader JB plays with a fan during the “Telepathy game.” PHOTO BY HOTARU NIITSU

They also played the “Telepathy game.” In this game, each member of the pair, standing back-to-back, should raise one flag, either red or white and should match the other pair’s flag.

The members of the boy group said that they’re cheating, with Jackson exclaiming: “I think, we should stop playing this game! It’s not telepathy game.”

When Oh explained the rules of the last game, the “Pedometer” game, GOT7 became ecstatic. One fan would be paired up with one GOT7 member, and together, they will shake to the best their pedometers.

Every GOT7 member showed child-like energy as each danced and did every movement to shake their pedometers.

The games also gave the fans the opportunity to have a once-in-a-lifetime “touchy-feely” moments with their idols.

Fans eliminated from the games were then escorted out by GOT7 members themselves. Some were even hugged before leaving the stage. The winners got the chance to take a group photo with the boys. 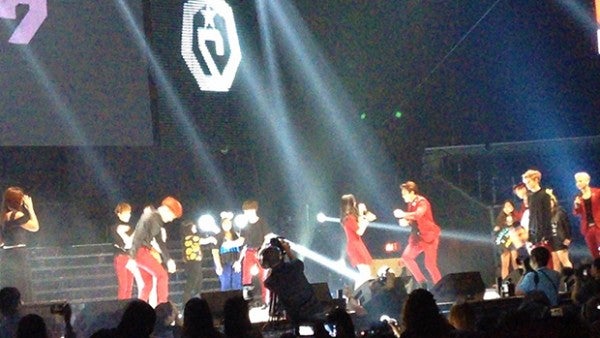 GOT7 members JB and Junior, as well as their partners, did their best during the “Pedometer game.” PHOTO BY HOTARU NIITSU

Their surprise, I GOT7’s surprise

One member of GOT7 prepared a surprise gift for their Filipino fans.

BamBam, known as the group’s fanservice king, gifted the fans with a rendition of the Filipino song “Ngiti” by Ronnie Liang.

The fans were touched by his effort to sing a Tagalog song.

Little did the group know, their Filipino I GOT7 also prepared a surprise for them, a tribute video that was a tearjerker for GOT7.

“I’m not gonna cry,” BamBam insisted though he looked otherwise. JB, their leader, thanked the fans for all their love and support.

Another surprise prepared by fans was a birthday cake for Yugyeom. This was an advance celebration for the youngest member’s birthday on November 17.

After dancing, he was caught off guard when the birthday cake was being delivered on stage.

Feeling overwhelmed, he said: “Really, really, really thank you. I love you,” and bowed to fans. 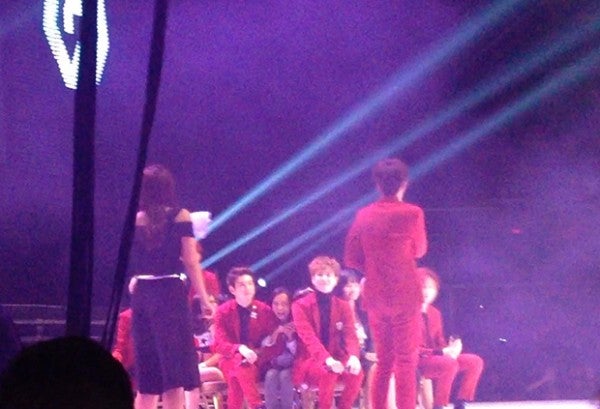 That priceless reaction from a Filipino fan who got squeezed between Junior and Yugyeom. She held tightly unto Junior’s arm. PHOTO BY HOTARU NIITSU

I GOT7s posted questions and requests on the fan board for GOT7, and each member of the boy group was to choose one post-it, whether it has their name or none.

Mark’s picked request asked him to say “Mahal namin kayo,” to which he obliged sweetly.

One fan, on the other hand, wanted to know when JB would have another drama, to which he said: “No concrete plans yet.”

Another interesting question was Jackson’s ideal girl to which he smoothly said: “It’s youuuuu!”

Succeeding requests for the other members of GOT7 were varied types of dance.

Junior was asked to do a sexy dance.

BamBam was to dance any girl group dance, and he chose to dance along their label mates Twice’s “Like OOH-AHH.”

Yugyeom as always was asked to do a demo of him being the “dancing machine.”

During this segment, especially the dance parts, I GOT7s were squealing like there’s no tomorrow. 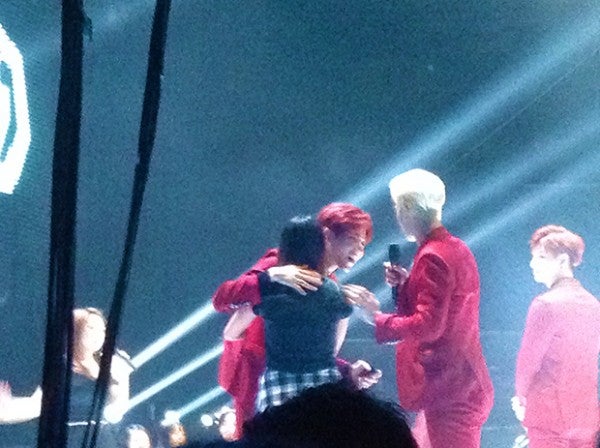 A Filipino fan was able to talk to GOT7 members BamBam and Jackson before exiting the stage. PHOTO BY HOTARU NIITSU

‘We’ll be back again’

GOT7 bid their farewell and left the stage after performing “Bounce.”

With the words “We’ll be back again” lingering in the air, the septet returned up stage after some minutes, with a remix of their hit “A.”

After singing “A,” the boy band finally said goodbye.

Maybe fans can hold unto the boys’ words: “See you next year!” and hope for their return here, perhaps, with a full concert.

As the saying goes, “love is sweeter the second time around.” Their return indeed was mushier than the first one.

“GOT7: 1st Fan-meeting in the Philippines” was brought to Manila by All Access Production together with JYP Entertainment.