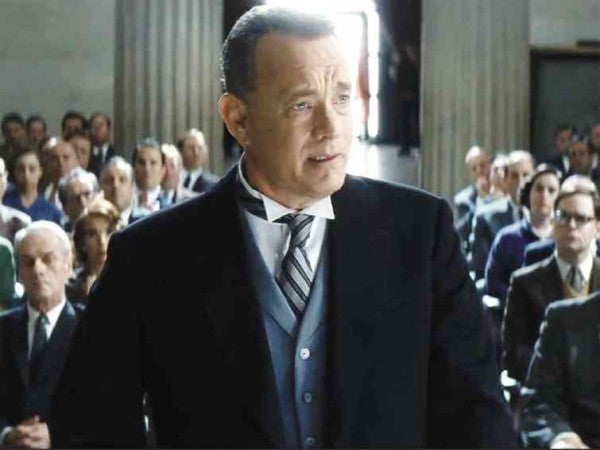 TOM HANKS in “Bridge of Spies”

FILM buffs made a beeline for the film “Bridge of Spies,” especially because it’s the fourth collaboration between lead actor Tom Hanks and director Steven Spielberg.

“Practice makes perfect,” of course, but there’s the extra assurance of solid entertainment value that comes from the realization that both film artists are leaders in their respective fields, so their work output together must be especially choice!

Spielberg directed Hanks for the first time in 1998, in the celebrated war epic “Saving Private Ryan.” That early, they realized that they worked particularly well together, because they both placed great value on collaborative filmmaking.

Yes, the director is the “captain of the ship,” but he motivates his actors to add insights and emotive nuances of their own, because many minds (and hearts) can be better and richer than one!

In addition, they acknowledge the fact that filmmaking is a constantly evolving process, with one insight “blooming” unexpectedly into another, so both actor and director have to be open to the evolving “possibilities” that manifest themselves at different phases of filmmaking.

After “Saving Private Ryan,” the Spielberg-Hanks tandem’s next collaboration was on “Catch Me If You Can.” The film is about a master con man played by Leonardo DiCaprio, and Hanks is cast as the FBI agent who doggedly pursues him—and finally serves him his just legal desserts at film’s end.

Reviewers cite the movie as Spielberg’s “best-acted” film, so Hanks and DiCaprio should take a well-deserved bow—and Spielberg should join them as well, because he did bring out the best in them!

Next came “The Terminal” (2004), Spielberg’s cautionary story about an Eastern European tourist who arrives at John F. Kennedy International Airport in New York just as war breaks out in his country. He finds himself caught up in international politics, and is “trapped” at the airport!

The film’s unique story and confining terminal setting enabled Hanks to come up with a detailed and “involuted” portrayal that underscored the subtlety of his thespic gift.

As for “Bridge of Spies,” some reviewers note the exceptional portrayals Spielberg succeeded in eliciting from his stellar cast, and even observe that wouldn’t be a surprise to see some trophies being handed out for its performances. Hanks paces the rest of the movie’s cast of players in this regard—so, is yet another acceptance speech in order?

Aside from the four movies they’ve collaborated on as actor and director, the Spielberg-Hanks tandem has been involved in the coproduction of other projects, like the mini-series, “Band of Brothers” and “The Pacific,” and on the documentary, “We Stand Alone.”

Clearly, they relish working together, each “feeding” on the other’s excitement and psychic fulfillment over coming up with exceptional film and TV productions—so, it’s likely that they will continue to collaborate on other productions in entertainment seasons to come!

Read Next
Liza Diño
EDITORS' PICK
Over 3 Million worth of prizes to be won at Smart Padala’s SENDali Manalo Promo!
Acer starts the year off strong with the Aspire Vero National Geographic Edition
Uproar over no vax, no ride policy: Maybe it’s time for gov’t to say sorry—Bello
97% of COVID-19 beds at PGH currently occupied
Japan brings back virus restrictions over Omicron surge
Gear up and get ready to play with Yamaha Mio Gear
MOST READ
1Sambayan names 7 aspirants in its 2022 Senate lineup
Emma Stone calls Andrew Garfield a ‘jerk’ after he ‘lied’ about his ‘Spider-Man: No Way Home’ appearance
Guevarra to Acosta: Obey rules on unvaccinated
PH to import 60,000 tons of fish to cover shortage
Don't miss out on the latest news and information.