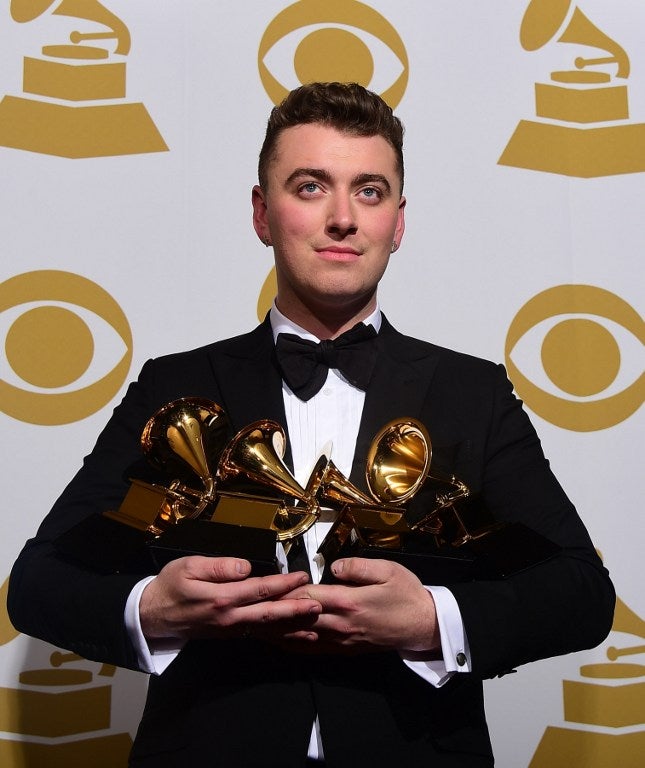 (FILES) In this February 8, 2015 file photo, Grammy winner Sam Smith, poses in the press room after performing on stage during the 57th annual Grammy Awards in Los Angeles, California. Sam Smith was by some measures last year’s biggest breakthrough musician but on his latest song he is sadder than ever. Smith returns to his familiar subject matter of fleeting love on “Drowning Shadows,” a previously unreleased song that will appear on a deluxe edition of his blockbuster album “In The Lonely Hour” that comes out November 6. AFP PHOTO / FREDERIC J. BROWN

British soul singer sensation Sam Smith desperately wants to take a year off. But he just can’t stop working on his new album.

The 23-year-old Londoner, who pocketed four Grammy Awards for his debut album “In the Lonely Hour,” has had a whirlwind year filled with performances and promotional tours the world over.

But the astounding breakout success came at a cost and in May Smith had to have surgery on his vocal cords.

So now Smith wants to take a bit of a breather. Except that shutting off is proving harder than expected.

“I have a year off of being on the scene and releasing,” he told journalists in Beverly Hills on Sunday. But “I’m forever working in my head.”

“I’m always going to write music — I can’t sit still when it comes to that thing,” added Smith, sporting stubble and an elegant midnight blue suit.

He joked that, come February, he would be tweeting his fans that he’s ready to release something new.

“I’ll refrain because first people will get sick of me and my family needs me to be home,” he added.

He said he’s already written four songs for his second album, describing them as “quite sad.”

“They’re about different things, my relationship with my family, for example,” he said.

His comments came just days after the singer, who speaks openly about being gay, told talk show host Ellen DeGeneres that he wanted to take a year off “to kiss some more boys so I can write some songs.”

Reflecting on his surgery, Smith joked: “I learned that I talked a lot because I had to be quiet for three weeks.”

And now Smith is battling a bad cold, forcing him to cancel several performances.

“I woke up yesterday and I just couldn’t sing,” he said, adding that after his operation he’s become very “scared about damaging things.”

He acknowledged it’s the price he’s paying for the runaway success of hits “I’m Not the Only One” and “Stay with Me.”

“It’s a good problem to have but people pull you everywhere,” he said. “And flying is a killer.”

His fate is similar to that of Adele, another British singer-songwriter who became an international sensation following her first album, which, like Smith’s, was inspired by a breakup.

Adele also had to have surgery on her vocal cords and — again, like Smith — wrote the official theme song for a “James Bond” movie.

The 007 movie theme tune “Skyfall” won her the best original song Oscar in 2013 in a first such honor for the famous spy saga.

Smith’s “The Writings On the Wall” is the theme song for the latest film in the Bond franchise, “Spectre,” which overcame lukewarm reviews to triumph at the North American box office on its debut weekend, earning a whopping $73 million, according to industry estimates.

The theme song is the first in the history of the spy thriller to top the UK charts.

Asked Sunday whether he can write while he’s happy, Smith was quick to say no.

“Part of me wants to be the artist people turn to when they’re sad and they just want a good cry and a glass of wine,” he said.

“But also I have a melancholiness inside of me that I’ve had since a very young age.”