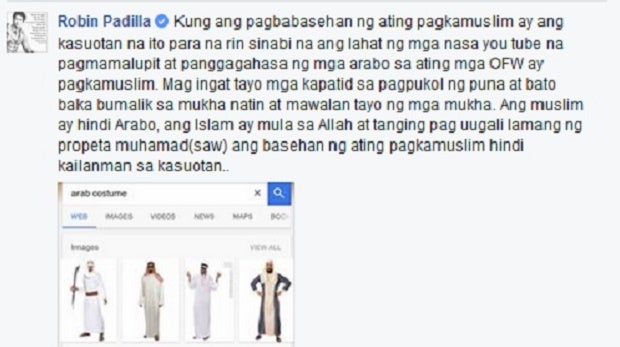 Actor Robin Padilla said that the ongoing discussion on the costume worn by Senator Vicente “Tito” Sotto III and Joey de Leon during the Halloween special of “Eat Bulaga” is not worthy of his time, fearing that it might backfire to Muslims.

In a statement on his Facebook account, Padilla said that there are other issues that need to be focused on such as demanding accountability for the Zamboanga siege or addressing the plight of internally-displaced persons.

(If the basis of our being Muslim is this dress, then it is akin to saying that the abuses toward our [overseas Filipino workers] perpetrated by Arabs that we see on YouTube is what being Muslim is. Let us be careful in hurling criticisms for these might come back to haunt us and cause us to lose face. Being a Muslim is not being an Arab, Islam emanated from Allah and only the character of the Prophet Muhamad (SAW) is the basis of our being Muslim and never our dress.)

Sotto and De Leon were slammed on social media after they appeared in the October 31 episode with a keffiyeh (headdress) and a thawb (long-sleeved garment) usually worn by Arab men.

“Choose your [battles] and be wise in propagating Islam. [How] can we achieve peace, prosperity and the realization of shariah when the representation of Islam in our hearts is the Arab Costume [and] not the character and the light of Prophet [Muhamad (SAW)?] [I] have fought with you in many peaceful ways but this campaign against a showbiz and political personality is for me not worthy of my revolutionary time, this is not an Islamic insult nor a [race] issue,” he said.

On November 1, Autonomous Region in Muslim Mindanao governor Mujiv Hataman demanded a public apology from the hosts and producers of “Eat Bulaga” for wearing the outfit, saying that it is an affront to Muslims.

For his part, Sotto remains unapologetic, saying that he finds nothing wrong with his costume which was allegedly given by a Shiekh friend. AJH

Read Next
Tony winner Lea Salonga renews ‘Allegiance’ to Broadway
EDITORS' PICK
High inflation: Your P1 is now worth only 87 centavos
UK’s Boris Johnson will resign, BBC reports
High-risk pregnancy: Reducing your risk is in your hands
Geek out at TOYCON 2022 powered by Smart Signature
House energy committee chair Arroyo bats for cheap electricity
Unemployment rate up to 6% in May
MOST READ
Suspect in grisly killing of missing woman in Bulacan arrested
Kim Atienza’s daughter flaunts bikini body in response to critics of her ‘revealing photos’
Japanese artist who created ‘Yu-Gi-Oh!’ found dead in the sea
FDA probes popular Filipino noodle brand for ‘high level of ethylene oxide’
Don't miss out on the latest news and information.