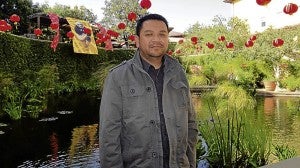 LOS ANGELES—Louie del Carmen was sitting outdoors at the DreamWorks Animation in Glendale, California, when he laughed after being asked: Is there competition between you and your brothers? 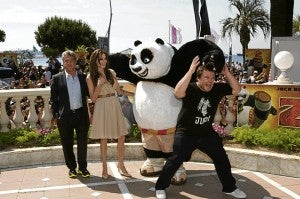 The Filipino-American story artist behind “Kung Fu Panda 2” has two brothers in rival studios—Ronnie (“Up,” “Finding Nemo”) is at Pixar while Rick (“Family Guy”) is at Fox Animation.

“But maybe, subconsciously, we do,” he hastened to add. “We are just fascinated with the fact that the three of us actually understand what each brother is talking about. It’s rare that you have a family member whom you can relate to on that level.”

Louie, the youngest of the talented, Cavite-raised Del Carmen brothers, said they likewise share stories: “We know the same circle of people. We’ve worked with the same people. But when we get together, we actually don’t talk about animation that much.”

We wondered what kind of upbringing the siblings had that nurtured three artists who are working in the top animation studios in the United States today. Louie thought it was because their parents left them alone: “They were not strict at all.”

Their father Rogelio, a former manager at Pacific Bell, had passed away. Their mom Lilia (nee Gonzales) was a singer in Manila in the 1950s, who later worked at various hotels in LA.

‘Look, he’s drawing!’
“I can remember once as a kid I saw Ronnie drawing,” Louie said of his growing up years in the Philippines. “It’s one of those things where you go, ‘Oh look, he’s drawing! Let me see if I can draw, too.’ We all started doing it. When you are doing that in one corner, and the house is quiet, I don’t think you’re going to get many arguments from your parents. They probably thought, ‘They are drawing, great. They are not getting into trouble.’”

As for his early sources of inspiration, Louie said: “The common ones were obviously the superhero comic books that Marvel and DC produced. Ronnie would buy comics, read them and pass them on to Rick, who in turn would pass it on to me. I was also influenced by the American cartoons that were being shown in the Philippines during that time.”

Louie, who was born in 1967, also cited the Filipino komiks. “I don’t remember the stories but I remember the art from Wakasan, for example,” he said. “I was too young to understand the storylines but I knew that the art was really interesting. That’s when I realized that wow, Filipinos are good artists … I also remember the comics in the newspapers. We are really inspired by the Philippine comics.”

Louie said he has met Tony DeZuñiga, the pioneering Filipino artist who worked at DC Comics in the 1960s. “I’m a big fan,” he said of the veteran, who, like the Del Carmen brothers, studied at the University of Santo Tomas. “I met Tony at Comic-Con and I thanked him for blazing the trail.”

Working with DreamWorks’ story department, Louie has devoted the past three years to “Kung Fu Panda 2.” He explained: “We were in charge of filmmaking, storyboarding so we were on top of the production, fleshing out the story and script and translating them onto storyboards.”

Jack Black and Angelina Jolie are back as the voice talents behind Po and Tigress, respectively. There’s a new villain in Lord Shen (voiced by Gary Oldman), a peacock determined to conquer China.

“I worked on many different parts of the movie,” Louie said. “But there are specific scenes in the movie that I storyboarded.” He cited examples: “In the development of the villain, the peacock … the chase in the rickshaw … We also did parts of the fireworks factory … Po and Shifu (Dustin Hoffman) in the beginning.”

“Voice actors like Angelina Jolie elevate the scenes to another level,” Louie said of the thespians’ contribution to the movie directed by Jennifer Yuh Nelson. “To hear Jack Black or Angelina or any of the great cast members deliver lines, especially when there are bits of writing that you have done, and then they flesh out the characters because they are good actors—these make you see scenes in a totally different light. It’s just a blessing.”

Louie said that Jack contributed very much to the character of Po: “Sometimes he will improvise in the recording booth. Oftentimes, we use what he gives us because he is so connected to the character. Angelina is so intelligent, as far as asking the right questions about her character and her motivations. She gives us something that maybe we didn’t think of. It’s a great process.”

Enrolling in UST at age 15, Louie took commercial art and then switched to computer science. “I thought I was going to be a programmer,” he said. “But then it did not turn out so well.” Already a US immigrant by that time, Louie struggled as he tried to return to drawing. “The struggle for me was that it was hard to break in,” he recounted. “I hadn’t drawn for so long. I had to relearn the technique. Ronnie and Ricky helped me.”

Around 1995 Louie got a job in an animation studio: “I really tried to build a portfolio and luckily, it was good enough and I have been working since.”

That studio was Klasky-Csupo, where he worked on “Rugrats,” “Rocket Power” and other shows. “I started in character design and then moved to storyboarding,” he recalled. “After a few years, they offered me a directing position. I tried it. It was really rewarding. I learned a lot about myself. I’m still in touch with the crew that I worked with. You learn about time management and organization.”

Louie worked at Nickelodeon and Disney Television Animation before landing his current gig at DreamWorks. Married with two kids, the artist feels like he’s just starting to hit his stride: “It takes a while, especially in feature films, to get a momentum, career-wise. Let’s see where this takes me, possibly in supervising. Right now, I’m just having fun.”

Grateful for the breaks that came his way, Louie mentors young artists whenever he can. “I have this open policy,” he said. “People e-mail me. I talk to a lot of young kids, professionals and students. Here and there, I give lectures. When I was starting out, there wasn’t a lot. Internet was not really there yet. Now I use Internet a lot to share knowledge and mentor young kids and support them. That’s important.”

He advises aspiring animators to work hard. “There is no magic potion or whatever,” Louie said. “You have to work at it. You have to draw. It’s the basis of everything. You have to really try and discover what you have to offer.”