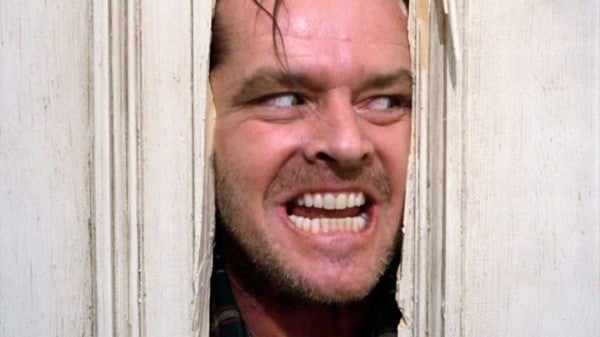 It’s that time of the year again when children dress up as supernatural creatures, saints, or their favorite fictional characters, asking for sweet treats from door to door. But for adults who have nothing to do and too lazy to join costume parties on the eve of November, Halloween can still be exciting and spooky even at the comfort of their own homes given the right company and material.

So cuddle up with your family or invite your friends to come over, grab some popcorn, and tuck under the sheets as INQUIRER.net recommends seven of the best horror movies to watch this Halloween.

Those who are fond of watching horror films know that one can never go wrong with the classics. Many years have already passed since the production of such movies, but it cannot be denied that traditional scare factors still work up to date.

This 1980 psychological thriller film features actor Jack Nicholson as Jack Torrance, a writer who took a break from his writing job and applied as caretaker of the isolated Overlook Hotel, which was built on the site of a burial ground, during the winter. Jack’s son Danny, who has psychic abilities, was able to see spirits who inhabit the hotel and developed premonitions, such as blood flowing through an elevator door. As the family was trapped in the haunted hotel in the middle of a snowstorm, Jack was influenced by some sort of a supernatural power and turned mad, leading to an attempt to kill his own son and wife. Prior to settling in, Jack was warned by the hotel manager that a former caretaker developed cabin fever and ended up murdering himself and his family.

The screenplay was based on Stephen King’s 1977 novel of the same title, although the film adaptation and the original material had noticeable differences.

Who can forget that infamous “spider-walk” scene down the stairs?

Numerous films about exorcism have already been released in the past decades, but this all-time favorite remains to be regarded as the scariest of them all, according to reviews and publications. After all, it distinguished itself as the first horror film to be nominated in the Best Picture category of the Academy Awards, together with nine other nominations. It has also become one of the highest-grossing films of all time.

The plot revolves around the demonic possession and saving of 12-year-old Regan, daughter of actress Chris MacNeil, who started acting strange, making weird noises, bad mouthing, and causing her bed shake after playing with a Ouija board. She even killed a director of her mother. Doctors maintained that there was nothing medically wrong with Regan, noting that only an exorcism can help her.

The film, based on producer William Peter Blatty’s own 1971 novel of the same title, was said to be inspired by the exorcism of an anonymous boy under the pseudonym of Roland Doe in the late 1940s, which was said to have been witnessed by 48 people led by Jesuit priests.

The film revolves around siblings Sally and Franklin Hardesty, accompanied by their friends, who went to the grave of their grandfather upon reports of vandalism and robbery, and visited a family homestead afterwards. They were hunted by a family of cannibals in rural Texas, led by the faceless and chainsaw-wielding murderer Leatherface, whose face was covered by a mask made of human skin and who used tools such as hammer and meat hook in murdering the group one by one.

Regarded as one of the best and most bizarre horror films ever made, the fictional Texas Chainsaw Massacre was packaged as based on a true story to attract more viewers. It was banned in several countries upon its 1974 release due to violence complaints. Nevertheless, it has been a box office success that led to the production of a franchise of sequels, remakes, comics, and video game adaptations. A prequel titled “Leatherface,” which will dwell on the backstory of the infamous main antagonist, is set to be released in 2016.

The title of this film speaks for itself. One of the more contemporary horror-supernatural films, Sinister separates itself from the recent wave of movies about haunted houses through inventive storytelling and a mysterious premise. It dwells on the family of true crime writer Ellison Oswalt played by actor Ethan Hawke, who just moved in to a new home—the site of a family murder depicted at the beginning of the film where four people, whose heads were covered with sacks, were seen hanging on a tree.

Ellison was the only one who knew that their new home was a murder site, planning to use the case of the murdered family as a premise for his new book. He found a box containing eight film reels, and later found out that the short “home movies” depicting different ways families were murdered were the works of a demonic killer.

A sequel to the film was released this August.

The director of Saw and Insidious has made another horror benchmark with the 2013 release of The Conjuring, a film said to be based on the case files of paranormal investigators and authors Ed and Lorraine Warren. The film revolves around the Perron family, who has been terrorized by various paranormal events after moving in a farmhouse in Rhode Island in 1971.

The family sought the help of the Warrens, who ruled that the house should undergo an exorcism. Ed and Lorraine found out that the house was previously owned by accused witch Bathseba, who killed herself and cursed everyone who would take her parcel after offering her week-old child to the devil in 1863.

A sequel titled “The Conjuring 2: The Enfield Poltergeist” is slated for a June 2016 release.

This British horror-thriller film which premiered in the Sundance Film Festival follows a group of six women who went spelunking one morning. In the middle of a heated discussion in their adventure, one of them admitted that she misled the group to an unknown cave system instead of the fully explored one that they originally planned going to.

The group moved forward in a bid to find a second exit as they encountered piles of human and animal corpse, pool of blood, and cave markings, and equipment from previous cavers. But the greatest challenge came in the form of blind humanoid creatures called “crawlers,” which attack on impulse base on what they hear. The Descent revolves around the escape and struggle of the group of friends as the flesh-eating creatures hunt them.

A sequel which depicted events two days after the first film was released in 2009, but it was not as positively received as the original installment, both in the box office and in the critic circles.

This 1982 adaptation of John Campbell Jr.’s novel “Who Goes There” is perfect for those who love both science-fiction and horror. “The Thing” being referred to in the title is the film’s main antagonist—a shape-shifting and parasitic alien that has the ability to imitate the form of its next target. The Thing sent a group of American researchers in the Antarctic in paranoia, not knowing if one of them was the creature mutated into its killing form.

Despite positive reviews from critics, with some even regarding it as one of the scariest films ever made, The Thing fared low in the box office supposedly because its release coincided with more popular and optimistic science fiction films like Steven Spielberg’s “E.T. the Extra-Terrestrial.” JE

Read Next
K-pop celebs share skincare secrets
EDITORS' PICK
Get exciting deals and discounts when you download the new McDonald’s App
Batangas execs, Taal evacuees thank House; hopeful on rehab efforts
SM continues to send relief assistance to remote towns in Batangas
PAL: Passengers with flights to parts of China may request for refund, rebooking
5 years after Mamasapano, son of fallen SAF 44 trooper remembers his ‘idol’
‘A greener, cleaner tomorrow’: A how-to guide for Filipinos who want to help with today’s energy crisis
MOST READ
Taal’s sulfur dioxide emission increases
Seized food items from China tested positive for ASF–BOC
No time for revelry; Tagaytay instead plans for alert level 5
Dina Bonnevie on Coney Reyes: We have forgiven each other
Follow @YGonzalesINQ on Twitter
Don't miss out on the latest news and information.