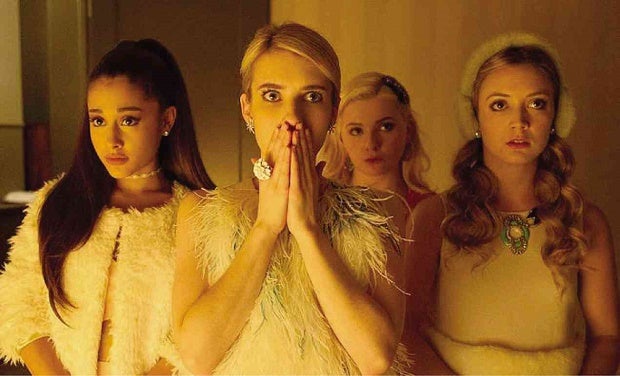 Trust Ryan Murphy and his “Glee” cohorts Brad Falchuk and Ian Brennan to come up with a TV series so odd and campy that one can’t help thinking—just what on earth is this show?

But embracing unconventionality has always been Murphy and the consortium’s thing, and while “Scream Queens” clearly is a gory, darkly funny satire of mean-girl culture and horror-slasher tropes—one can’t help wondering if there will be a satisfying payoff to watching this unending snarkfest of mostly amoral characters.

Not that it isn’t funny or well-scripted, initially—Chanel Oberlin (Emma Roberts) is the sorority queen of mean, with underlings named after her: Chanel # 2 (Ariana Grande), Chanel # 3 (Billie Lourd), Chanel # 5 (Abigail Breslin), etc.

But Dean Munsch (Jamie Lee Curtis) makes no secret of her Chanel-hate, and soon declares that the sorority membership is open to anyone, regardless of social clique or gender.

One of the new recruits is Grace (Skyler Samuels), who actually cares about the mystery of a young member’s death 20 years ago, and the recent murders that seem to be connected to it.

It’s hard not to compare aspects of “Scream Queens” to “Glee”—Curtis’ character is a less-unreasonable but more cunning version of Sue Sylvester, and there’s a ton of left-field moments.

As for differences, Lea Michele as Neckbrace/Hester looks too mature to be college-age, but she’s a reliable actress that it doesn’t matter much in this reality. And whenever Niecy Nash’s comedic routine slips in and out of the storyline, it takes viewers out of that reality, warped as that world already is. Although, come to think of it, “Glee” had similar moments with Sue.

The first season has an impressive cast, regardless. Apart from the aforementioned actors, it includes Nasim Pedrad, Oliver Hudson, and a few objectified man-candies like Diego Boneta, Glen Powell and Nick Jonas.

The bad girls of “Scream Queens” can get exasperating, though, just as repetitive as the mystery involving the murderous Red Devils, who are responsible for some deaths on- and off-campus. But what “Scream Queens” does right, undeniably, is its scathing parody of celebrity culture.

If only the show could replicate that kind of spoofing on a weekly basis. But it’s young yet, and might actually surprise by becoming a more solidified, scream-worthy series, hopefully soon, before the scandalous shenanigans lose their edge.