If rock legend Freddie Mercury were still alive and had flown to the Philippines for a concert, he would have cursed Manila traffic.

At least that’s what his impersonator did.

In between pumped performances of Queen’s classic hits, Gary Mullen and his tribute band The Works complained of bumper-to-bumper traffic in the Philippine capital on Saturday evening.

“What is wrong with the bloody traffic here?” Mullen told a laughing crowd, which quickly forgave him for his delayed arrival at Solaire’s The Theater.

“On the way here I thought I was gonna die,” he said, explaining that there was a “bloody wedding car” going the wrong direction along the highway.

Mullen, who–with his voice and make-up–is a dead-ringer for the late rocker, immediately had the VIP crowd on their feet.

He was sweating after the first song (“One Vision”) and by the second (“A Kind of Magic”), he had taken off his jacket (he took off his undershirt later in the show to reveal a half-naked resemblance to Mercury).

“If you’ve come tonight to sit on your ass in these chairs, go home,” he said.

Mullen has been impersonating the charismatic Freddie Mercury, who served as the voice and the face of the rock band Queen, for around 15 years after winning the British talent show Stars in their Eyes. Since then, he has been performing as Mercury. Because of his success, he decided to form the band The Works and create the theatrical concert show “One Night of Queen,” which will again run in Manila on Sunday night.

READ: Get ready for One Night of Queen in Manila

Mullen did not disappoint Filipino fans.

Inspired by the famous Wembley Stadium concert in 1986, the band was dressed as Queen — Mullen in yellow jacket and white pants with side stripes and their lead guitarist David Brocket in a striped shirt with long curly hair reminiscent of Brian May.

And who can forget the “mic stick,” which has become Mercury’s favorite concert staple after his microphone stand snapped in half during an actual show?

The band had Queen down pat.

By the time he sang “Another One Bites the Dust,” the crowd knew already that Mullen was not a lazy performer.

He performed indeed, true to the form of Queen theatrics — complete with knee-aching back bends.

After delighting the crowd with favorites “Killer Queen” and “Bicycle,” Mullen worked the stage with the song “I Want to Break Free.” At one point, he started high-fiving those at the front.

Mullen then started doing voice improvizations with the crowd, in an attempt to channel Mercury during the Wembley concert when he asked 72,000 people to vocalize with him.

“Are your bottoms glued to the seats?” he later said, aware that he was the only one in the theater “sweating like a pig.”

Song after song after song, Mullen’s energy never seemed to wane. He also wouldn’t stand still for the camera, often running to the sides or going up the mini stage behind his drummer Gordon McNeil.

In the middle of one song, the band, Mullen included, gave the stage to Brocket, who has been recognized as one of Scotland’s best guitarists, for an epic guitar solo.

The Mercury reincarnation, however, was challenged by the Filipino crowd’s addiction to their cellphones.

“Are you bloody Facebooking?” he asked someone who was busy checking his phone during the show.

He got the audience up on their feet by the time he started singing “Under Pressure,” followed by “Hammer to Fall” and “Crazy Little Thing Called Love.”

Although he couldn’t match Mercury’s voice range or keyboard talent, he made up for it with his boundless energy and guitar-playing.

The thumping rock music even made the people at the balcony stand up and clap their hands.

Mullen reminded the crowd that they should be looking at the band on the stage and not from the screens of their gadgets.

Still, he entertained each and every audience member taking photos and selfies with him.

As if to taunt the crowd, which by now was amazed by his vigor, Mullen started doing push-ups in between the lines of “Fat-Bottomed Girls.”

He was also nice enough to introduce the rest of the band, which includes Billy Moffat on bass and Malcolm Gentles on keyboards.

Finally, Mullen performed the much-awaited “Bohemian Rhapsody.” The crowd’s reaction was instant. Without being asked, they raised their hands in the air and swayed with the music. Some could be heard singing along the ballad segment.

After another song, Mullen blew a kiss and left the stage with his bandmates.

“One more!” the surprised crowd shouted. Somehow they knew it was not the right ending to the show. Some people at the back started whispering, enumerating the songs that have yet to be performed.

The band obliged and ran back on stage to sing an up-tempo version of “Radio Ga Ga.”

After that, the band performed one of Queen’s most famous songs, “We Will Rock You,” prompting people to automatically rise from their chairs.

Mullen gave a fitting ending to the show by singing “We Are the Champions” with the Philippine flag draped around his shoulders.

After thanking the audience, Mullen gathered his band at the front of the stage and did…what else but the “pabebe wave,” which he has apparently learned early on in his stay in the Philippines.

While many would argue that no one can replace or even match the vocal prowess of Freddie Mercury, Mullen’s “One Night of Queen” is the closest you can get to the real thing. It is for old fans wanting to relive the glory days of rock and roll and for those born much later seeking to learn more about one of the world’s most important music icons.

For one night, a fan can relive the stellar career of one of the world’s biggest rock acts. 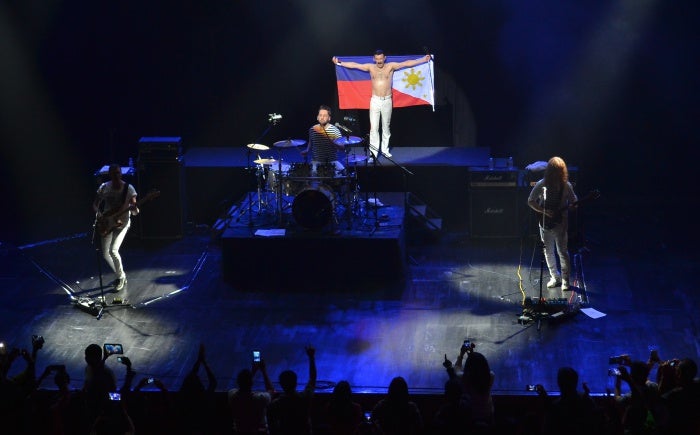 Gary Mullen showcases the Philippine Flag while singing “We Are the Champions” during One Night of Queen at Solaire in Manila. Photo by Kristine Sabillo/INQUIRER.net 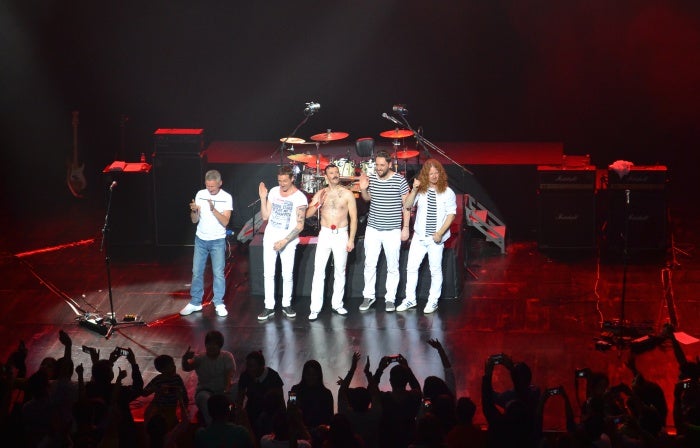 Gary Mullen and members of the band The Works do the “pabebe wave” at the end of their tribute show One Night of Queen at Solaire. Photo by Kristine Sabillo/INQUIRER.net 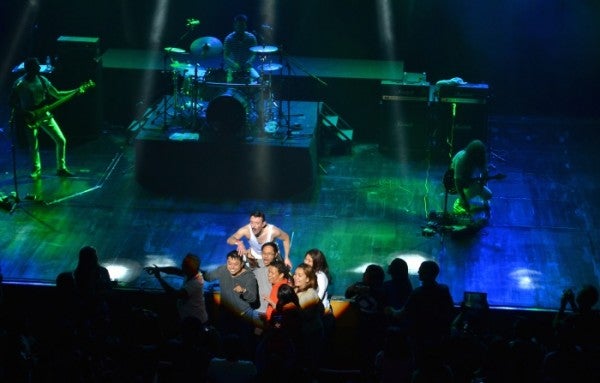 Gary Mullen takes a group photo with the audience while performing One Night of Queen at Solaire in Manila. Photo by Kristine Sabillo/INQUIRER.net 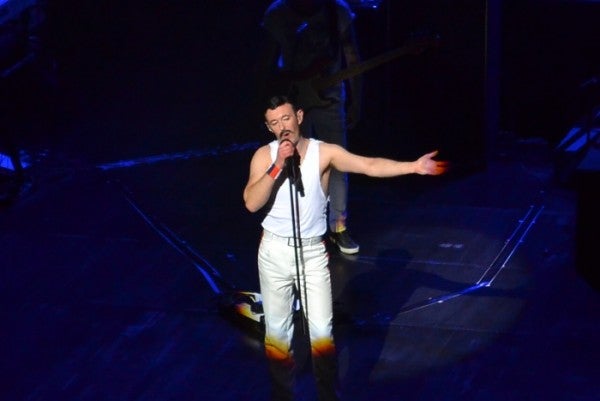 Gary Mullen, a dead-ringer for Freddie Mercury, performs One Night of Queen at Solaire in Manila. Photo by Kristine Sabillo/INQUIRER.net 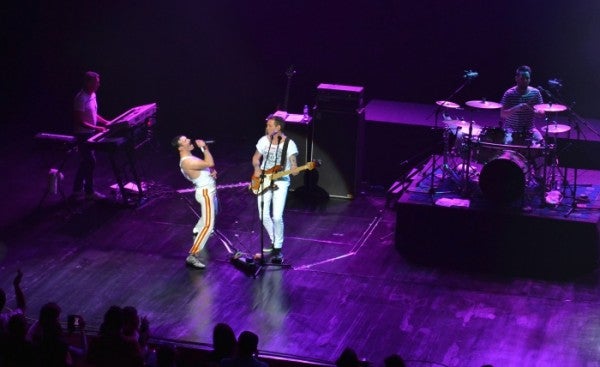 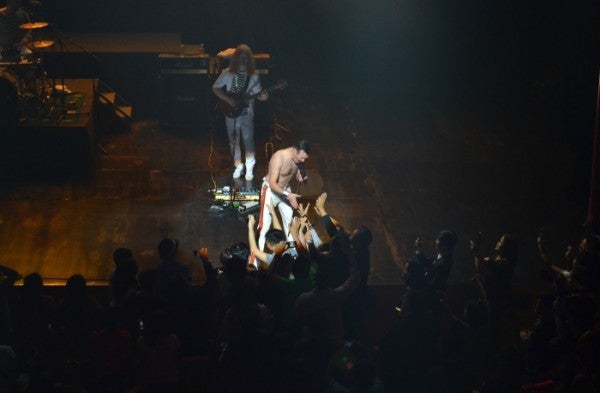 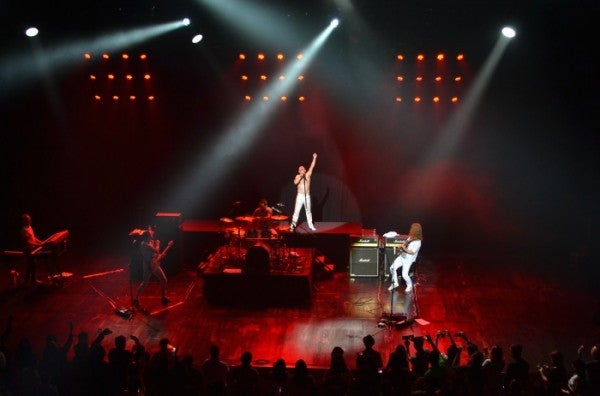 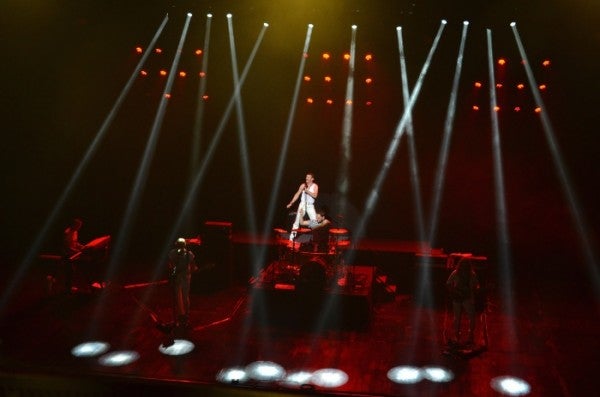 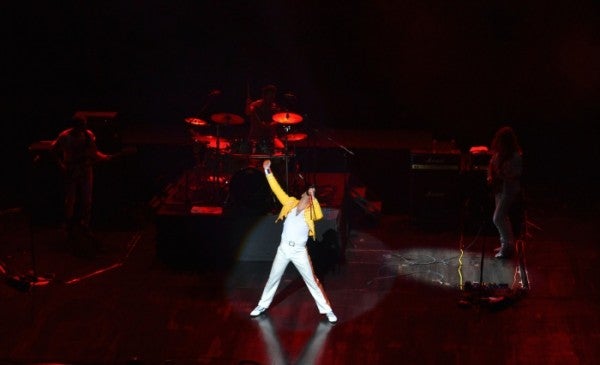 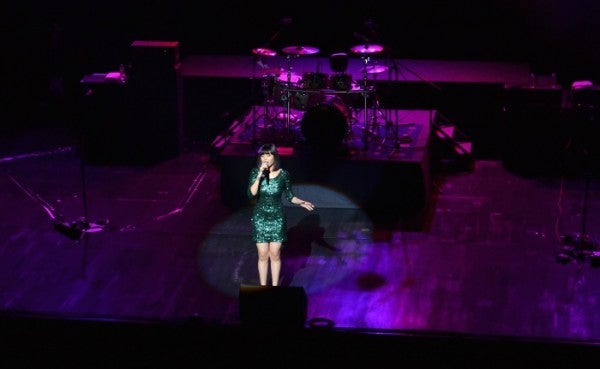 Filipina singer Glaiza de Castro performs as front act to Gary Mullen and The Works at the One Night of Queen in Solaire. Photo by Kristine Sabillo/INQUIRER.net 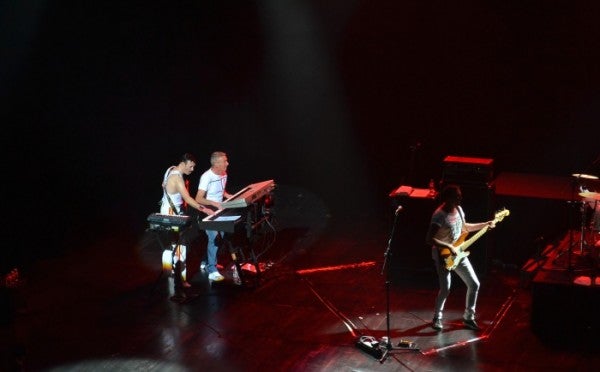 Gary Mullen tries his hand at the keyboard with Malcolm Gentles during One Night of Queen at Solaire, Manila. Photo by Kristine Sabillo/INQUIRER.net 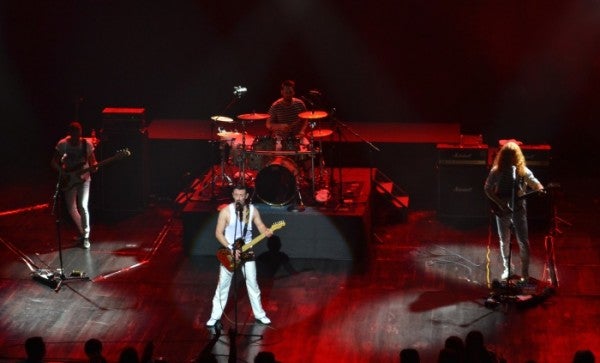 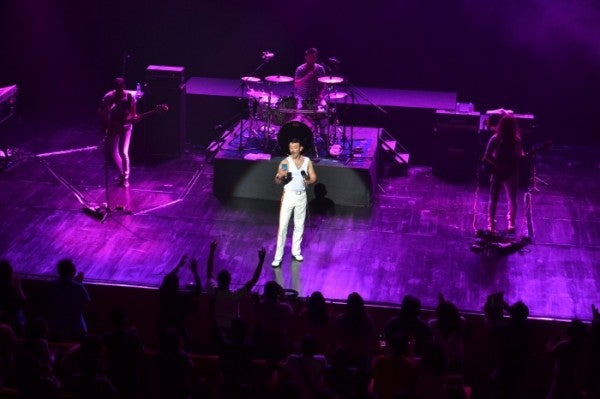 Gary Mullen takes a selfie for an audience member. Photo by Kristine Sabillo/INQUIRER.net 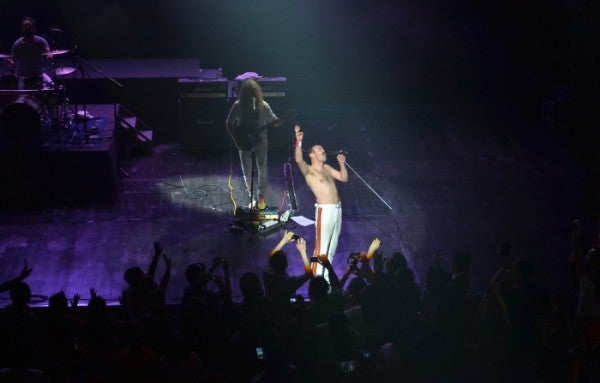 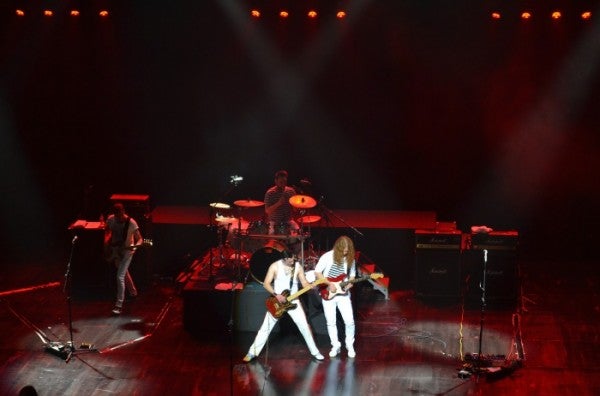 Gary Mullen plays the guitar side by side with David Brockett during One Night of Queen at Solaire. Photo by Kristine Sabillo/INQUIRER.net 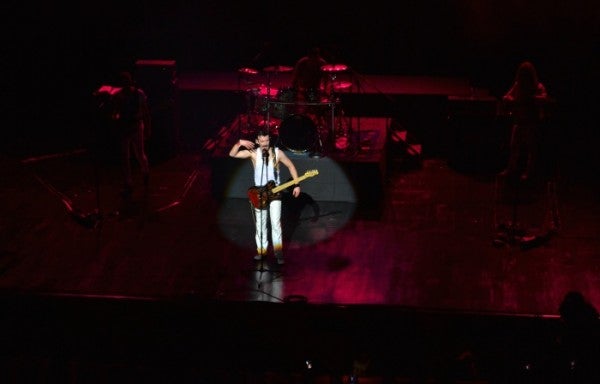 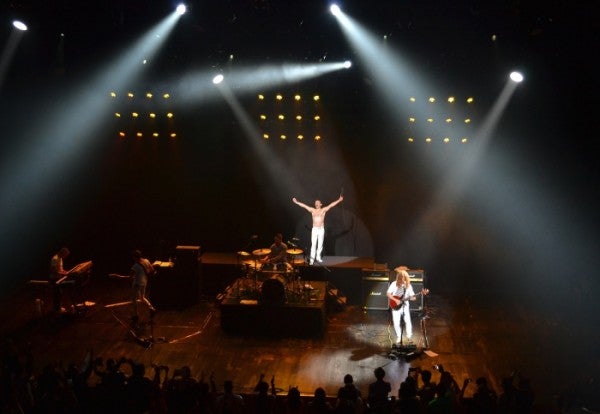 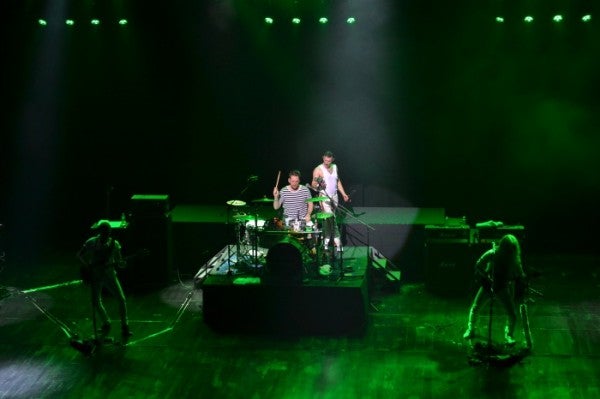 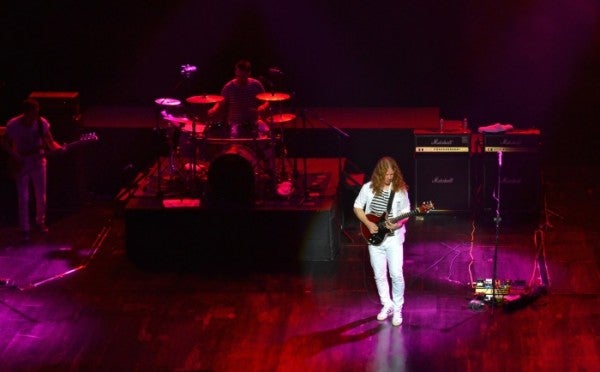 Lead guitarist David Brockett performs a guitar solo during One Night of Queen at Solaire. Photo by Kristine Sabillo/INQUIRER.net